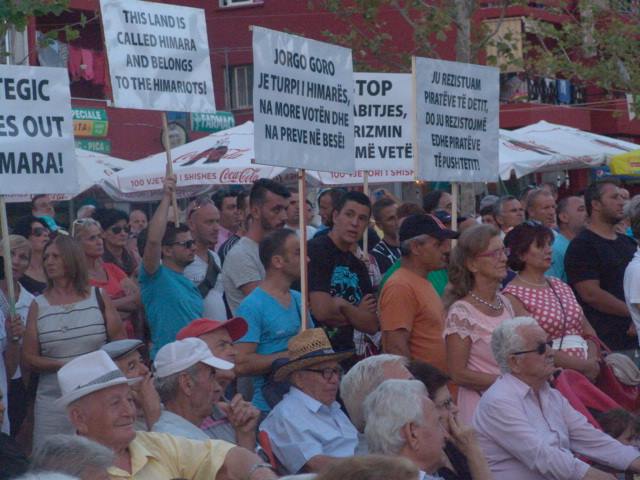 Yesterday, the inhabitants of Himara, a town along the Albanian Riviera, organized a protest against the destruction of 19 homes in the context of the urban masterplan, allegedly to make way for a new boulevard.

It is not the first time that the inhabitants of Himara have raised their voice against the urban requalification plans of the Albanian government. On August 15, 2016, a collective of political parties PBDNJ and OMONIA, together with several civil society organizations published a petition in which they demanded “[t]he immediate cancellation of all urban planning initiative, project or development plan, expropriation of private land, donation of community land to any domestic or foreign pseudo-investor that the Albanian government is planning and implementing in our region.”

Also the Greek Ministry of Foreign Affairs responded to the impending expropriation of the homes in Himara, through an official statement on Oct. 30, 2016 that the “Albanian authorities must proceed immediately, on one hand, to the cancellation of the demolition order and, on the other hand, to meaningful consultations with the owners concerning Himara’s redevelopment plans.” The statement also reminded the Albanian government of the fact that the “protection of property rights, and in particular of minority rights, is an integral part of the five conditions set by the European Union in order to start negotiations for the accession of Albania to the EU.”

The Greek Ministry of Foreign Affairs has repeatedly expressed its concerns for the situation in Himarë, considering the fact that the village is home to a Greek minority. These concerns have not always met with a positive response from the Albanian government. In a response to a previous declaration in July 2016, the Albanian Ministry of Foreign Affairs responded that “[o]ngoing efforts to instrumentalize any individual or collective dissatisfaction aim at distorting reality and hindering the excellent coexistence between the Albanian population and Greek minority, which enjoys full rights, based on the national legislation as well as on international norms and conventions.”

Prime Minister Edi Rama went one step further, provocatively posting an engraving depicting Athens in 1670 on Facebook, his preferred method of communication, laying claim to the Albanian roots of its population and the contributions of Albanians to the city. His argument, however, that because Albanians do not lay claim on Athens, Greeks should conversely not lay claim on Himara is invalid, because it happens to be the case that certain inhabitants of Himara speak Greek and identify as Greek, whereas the “autochthonous” Albanian population of Athens has all but completely assimilated (leaving aside the many hardships faced by more recent Albanian immigrants in Greece). Following Rama’s line of argument effectively undercuts any minority struggle, in the sense that ethnic identities are always historically contingent. But the fact that they are contingent does not mean they are irrelevant.