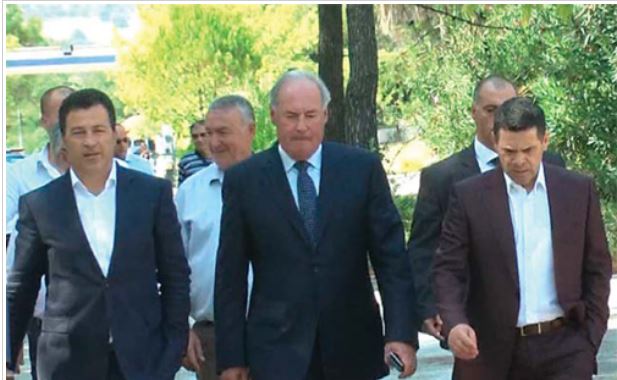 In September, Deputy Prime Minister Niko Peleshi and Minister of Finance Arben Ahmetaj announced that the oil refinery in Ballsh (ARMO), which had been bankrupted by its former owner, would be saved by a $52 million investment from an American investor.

According to Peleshi and Ahmetaj, the investor, who is “renting” the ARMO refinery, will reemploy the 1,200 oil workers which had remained unemployed. It would also assist with the enormous debts of ARMO, estimated at about $500 million.

On the same day, Prime Minister Edi Rama publicly praised the accomplishments of his government, which had managed to find a new and “very serious” investor for the Ballsh refinery, who would take care of everything.

The ceremony was also attended by the “strategic” investor: Harry Sargeant III, a US citizen and former fighter pilot from Boca Raton, Florida.

In Albania, Sargeant is owner of the Ionian Refining and Trading Company sha, founded in Albania in July 2016. The company is controlled by a mother company registered on the British Virgin Islands at the end of March 2016, administered by Ali Hasan Rahman, who also registered a local branch in Albania mid-April 2016.

Ali Hasan Rahman is the lawyer of Global Oil Management Group, located in Boca Raton, Florida. Harry Sargeant III is the CEO of this company.

Both the Albanian branch of the offshore mother company and the local company are administered by Taulant Musabelliu. The company has its headquarters in the offices of one of the most well-known oil businessmen in the country, Besnik Sulaj, on the tenth floor of Sky Tower, apartment 102. This address also hosts several other companies with the same administrator and the same type of activities.

Harry Sargeant III is a former fighter pilot from the US Marines, who after eleven years of military service and a short period as commercial pilot at Delta Airlines, joined forces with his father to administer a fleet of ships specialized in the transport of bitumen and other activities related to the oil sector.

He made hit the jackpot in 2004 with a company he just founded, International Oil Trading Company (IOTC), managing to secure a contract from the US Department of Defense for supplying gasoline to the US army in Iraq, as their regular supplier had problems with the regular delivery.

In fact, Sargeant was only able to secure the contract with the US army after he had received an exclusive transportation license to pass through Jordanian desert, a corridor necessary to supply the US army, through his relations with members of the Jordanian royal family.

After three profitable contracts, Sargeant decided that for the fourth contract, at a value of $2.7 billion, he would exclude his Jordanian business partner, who initially had enabled him to receive the transportation licence in exchange for the partnership. In order to do so he made a contract with a company that we also under his control, funnelling away all the profits he made with the gasoline transportation.

In 2008, the Jordanian business partner, Mohammad al-Saleh, brother-in-law of the King of Jordania, filed a lawsuit against Sargeant at the District Court of Appeal in Florida for fraud. Al-Saleh ended up receiving damages at the value of $29 million plus $3.5 million interest in 2011.

During the court case the Jordanian side testified and show proof of payments of $50 million made to Jordanian business linked to the government without any contract and without any apparent reason.

The lawsuit and subsequent conviction led to a broader investigation into the dealing of Harry Sargeant III and his many offshore companies, almost all called International Oil Trading Company, under the Foreign Corrupt Practices Act.

The proceedings were followed with great interest by the US media, as Sargeant is one of the largest donors of the Republican Party, funding the campaigns of Mitt Romney and John McCain.

The Pentagon investigated the contracts that Sargeant’s companies had won in Iraq and declared that he abused his exclusive license for gasoline transportation through the Jordanian desert and had engaged in “the worst form of war profiteering,” according to a congressional committee in 2008. The exploitation of his monopoly position caused more than $200 million damage to the US budget.

The different companies directed by Harry Sargeant III were put on a black list and were no longer allowed to supply public entities.

Meanwhile, the conflict with his Jordanian business partner continued. Even though Al-Saleh won several court cases and the District Court of Appeal in Florida awarded him $30 million in compensation, he has until now only received $31,500. The reason is that Sargeant’s company IOTC continues to claim that it has not enough money as a result of losing the contract with the US army – as a result of Al-Saleh’s lawsuit.

The legal battle of Sargeant ended on Febrary 8, 2016, when the United States Bankruptcy Court declared IOTC bankrupt, with a debt of more than $100 million, half of which owed to Al-Saleh.

Harry Sargeant III has now arrived in Albania – it is unknown which relation brought him here – in order to rent ARMO and process the crude hydrocarbonates extracted by Bankers Petroleum in the same region in order to supply the local market in Albania.

Sargeant has promised the Rama government an investment of $52 million to help ARMO, more or less the same sum that he still owes his Jordanian business partner Al-Saleh.

Minister Ahmetaj added that $52 million were only the beginning and that IOTC will also invest $100 million in natural gas company Transatlantik.

Two months have now passed since the sensational inauguration by the Prime Minister, and not a single cent has been invested into the refinery in Ballsh.

Unfortunately, the mismanagement and lack of investments have now caused the death of one of them, while leaving five other wounded.