How To Seduce an Artist–Prime Minister 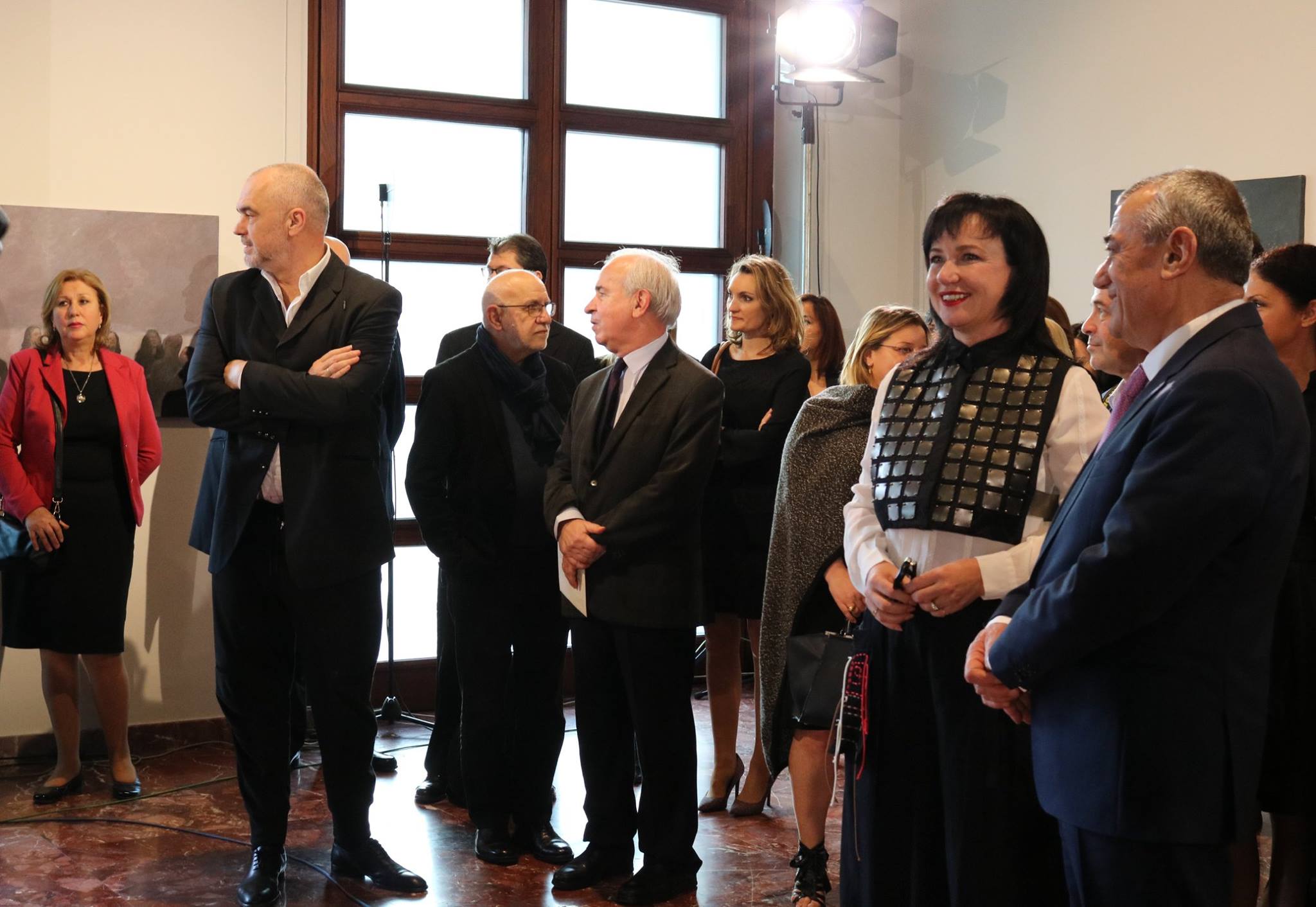 On April 11, the Center for Openness and Dialogue (COD), the gallery that Prime Minister Edi Rama built on the ground floor of his office in the Prime Ministry, opened its first exhibition of the 2018-II season. This year, the COD was faced with an acute problem: it has ran out of Albanian (and Kosovar) artists and curators that are willing to serve the fame and splendor of the artist-in-chief.

The solution was, as with the curator for the Mediterranea Biennale, to bring back an Albanian from “exile,” someone who has little affinity with the Albanian art scene and scant knowledge of the political situation. In comes Ornela Vorpsi: “It’s been 27 years that I live outside the country. I don’t know Edi as politician. I cannot follow him in this dimension, because I’m not immersed in the Albanian life.”

Residing in Milan and Paris since 1991, Ornela Vorpsi returned to Tirana for “her first personal exhibition in Albania.” The opening of the exhibition was attended by the crème de la crème of the court that Rama has assembled around himself: Speaker of Parliament Gramoz Ruçi, artist Edi Hila, journalist Blendi Fevziu, and other national and international sycophants. Ostentatiously absent from the photographs documenting the opening was any local Albanian artist or curator.

The reason is simple: Vorpsi’s solo exhibition has nothing to do with Albanian art, but everything with Albanian politics. Just like the COD exhibition Just Hanging Around, curated by Erzen Shkololli – who then went on to become director of the National Gallery, Vorpsi’s Providence is – no matter what her intentions may have been – first of all a form of political expression, a form of propaganda.

This simple fact is signaled by the explicit denials formulated in the dreary and bombastic curatorial text written by COD curator Genti Gjikola, the former head of exhibitions from the National Gallery:

If there is a surprise to be found in Vorpsi’s current work […] it’s that she successfully bypasses the turbulent Albanian political and historical narratives that are such a prominent component in her novels. But this occurs because she is not concerned with grand, general ideas: they simply do not generate curiosity in her.

So Gjikola claims that Vorpsi the artist is not interested in “political and historical narratives,” but rather the “mundane, the ephemeral and fleeting.” Such nonsense can be easily dismissed by referring to the extensive coverage given in the media to Vorpsi’s relation with Edi Rama, her former art teacher at the Academy of Arts in Tirana. The title of the exhibition, Providence, which is defined, according to Merriam-Webster, as “divine guidance or care,” all but confirms this thematic.

The exhibition shows photography, paintings, and video work. The first visual impression is a dominant presence of black and red, with the occasional appearance of other colors. This in itself firmly grounds the exhibition in the curatorial line set out by Shkololli’s Just Hanging Around, which also used the same nationalist color palette to connect the exhibition to its site: the Prime Ministry in the Albanian capital.

At first sight, the topic of the various works appears mainly to be Vorpsi herself. Self-portraits, nudes – a general display of self-obsession that resonates well with the main occupant of the building. Several works involving cats emphasize the obvious point: Vorpsi’s actual and proverbial pussy are on display. But who is being seduced? For whom is Vorpsi, a “gifted, penetrating” artist, as Gjikola claims, actually exposing her “feminine fragility and strength”?

Some of the works, such as the “Out for a Stroll” series give us a clue. According to Gjikola, the work “focuses on simple mundane scenes between a father and a daughter.” Again Gjikola’s keyword “mundane” tells us this is anything but “mundane.” As we know from Freud, every negation hides and unconscious affirmation, and this should be no secret for an artist in whose work “Superego, Ego, and Id meet, in amazement, on the surface of the pictorial plane.”

A recent interview with Blendi Fevziu provides us with additional evidence. In the interview, Vorpsi relates the 7-year imprisonment of her father in the political prison of Spaç, as if “half of the world […] didn’t exist.” Her mother was forced by the regime to divorce her husband, and when they visited him in Spaç, Vorpsi no longer recognized him: “I was afraid to touch this stranger.” After her father was released at the fall of communism, the family never reunited: “I still feel that he is a stranger, and I feel guilty of that feeling.” Vorpsi never experienced that “mundane scene” of having an evening stroll with her father; that mundaneness was brutally interrupted by politics.

As her estranged father is released from political imprisonment, Vorpsi enters the art academy to study the subject she loved since her youth: painting. This is where she encounters Edi Rama. Another interview reveals the Vorpsi’s enormous emotional investment in him:

Who didn’t love Edi Rama? […] I was Platonically in love with Edi. He hasn’t loved me. As a human, for me, he has been a genius.

You need to know, since he was in Paris, he enchanted the whole of Paris. Because he has an all-round eloquence and culture. What do you think, was there at that time a man who was so young and so knowledgeable that he talked about Martin Heidegger?

Resonating in the halls of the COD, the extravagant expression of Rama’s political power, these claims turn the entire exhibition into an act of seduction – a seduction of the father who offers “divine care.” Make no mistake: we are here in solidly Oedipal territory.

The key to the exhibition is without a doubt the only video work, a short film from 2018 with the significant title “Nevermore.” The video, with a feel of artificial nostalgia, shows a woman taking out a (pig) heart from under her blouse, pushing it through a meat grinder. Although the metaphor itself is rather one-dimensional and in-your-face (fragility! emotions!), the length of the scene turns it into an unintentional slapstick as the woman unsuccessfully tries to force the heart through the grinder, followed by a sudden, unmotivated cut to a brief shot of a wall with peeling paint. The video then cuts back to the initial scene, with the woman rolling four qofte (meat balls) from the supposedly ground-up heart. But it seems as if there is much more meat in the qofte than was in the heart, which gives the whole sequence the feel of a cheap special effect. The process of the grinding is mostly hidden from view by the unnecessary cut to the wall, which uncouples cause and effect. As a result, the four meatballs appear to have been ushered in from backstage.

“Nevermore” turns into a metaphor of itself and of the entire exhibition. Genuine emotions, perhaps even trauma and unprocessed mourning for the father, both the estranged father and substitute who no longer has time for her (Rama never translated a book of Vorpsi’s to Albanian as she had wanted), run through the special-effect meat grinder of Rama’s communications office to produce qofte, the mundane and omnipresent street food that accompanies all the government’s public events. The exhibition is interrupted by a cut, violently turning the emotional investment of the artist into the cheapest of products. The effect is both tragic and ridiculous.

No matter Vorpsi’s personal intentions, her avowed disinterest in politics led to a choice of location that has proved fatal: Providence has turned into a desperate seduction of the “divine” presence that “enchanted the whole of Paris” 27 years ago, but who turned out not to be a protecting, caring father that was so dearly missed in her youth, but rather an abusive, egocentric maniac. In this sense, the tragedy of Providence is very much a tragedy of Albania, a country that continues to struggle to find a leader that actually and honestly cares.

Vorpsi, and the rest of Albania, would do well to heed to her call: “Nevermore”!

Ornela Vorpsi’s Providence, curated by Genti Gjikola, is on display at COD until June 30. Opening times at the discretion of the Prime Minister.