The Prime Minister of Garbage 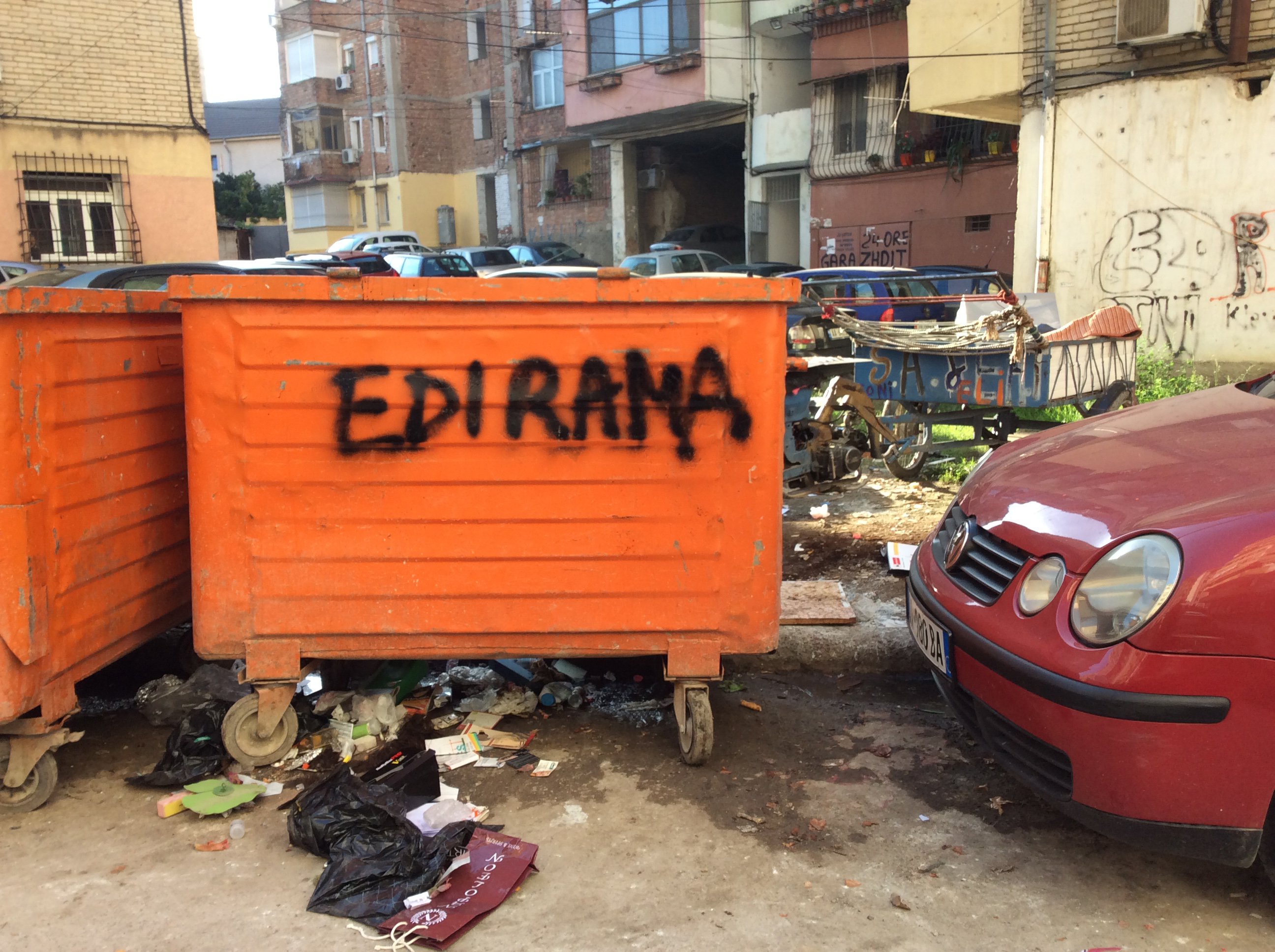 In October 2015, Endri Fuga, former co-founder of Mjaft and Propaganda Boss at the Office of Prime Minister Edi Rama announced the launch of a new governmental website, transparenca.al. According to Fuga, this “transparency website,” paid with taxpayers’ money, has as its sole purpose to deny “the slander of the opposition” and “the lies of certain media outlets.” The unintended side effect of this otherwise useless piece of government propaganda is to show us very clearly which media are on the government’s side. The extreme partisanship of media outlets may be a given for everyone living in Albania, but it may come across as slightly incredible to an outsider. That’s why the transparency website is so instructive; in the logic of the government, those media outlets that are never featured on transparenca.al apparently always speak the truth – the truth of Rama, that is.

And what is the “truth” of Rama these days? Well, that importing trash from Italy is good for the Albanian economy and that it is not dangerous at all. That this import is necessary for the existing “recycling infrastructure” to function properly, because there would be an overcapacity. Rama really wants this to be true, even if he may not understand himself what is in his own law. So the government media are spending day and night to feature members of parliament and government officials defending the indefensible: the willful ecological destruction of Albania, and for what? Does he want yet another villa? Does he need to buy more paint?

No “argument” is left unused in the enormous backlash that this act of utter hypocrisy generated in civil society, including a wonderful collective action that brought the names of all the MPs that voted for the law to the trash bins of Albania. And rightly so. The law that speedily passed in parliament offers significantly less protections for the environment and citizens of Albania than a similar law that Edi Rama himself protested against in 2011. In fact, Rama’s protest against former PM Berisha’s law on the import of trash was an essential part of his election campaign. Did I already say hypocrisy? Let me say it again: total, utter, disgusting and degrading hypocrisy.

But what about all these arguments? What about the viability of the recycling industry in Albania? Allow me to recall facts that I would love to see being denied by transparency master Fuga: 1) It is impossible that there is not enough trash in Albania for the recycling plants not to function. Look at the Lana river, look at the Tirana river. Look at any corner at any mountain road and valley path. Look at any beach. Trash, trash, trash. Nothing but trash. There is already enough trash in Albania to recycle for the next century!

And then the “quality” of the so-called recycling industry that is suffering so badly in the absence of a “proper” law. I hope I do not have to remind our readers that only a month ago a 17-year-old boy died in the “model” recycling center in Sharrë opened and promoted by Mayor of Tirana Erion Veliaj. Further research (never debunked on transparenca.al) showed that not only that this landfill and recycling center operated through child labor and practical slavery, leaving all its employees uninsured, without contract, and unprotected on a toxic waste dump, but that moreover the company 3R hired by a public-private partnership of the Municipality of Tirana and an Italian company was run by a card-carrying Socialist Party leader – neither this criminal, called Edurim Teqja, nor the person politically responsible for Ardit Gjoklaj’s death, Erion Veliaj, has been arrested. So even if imported trash would bring more work, who would want to work under such inhumane conditions? Of course, only the poorest and most vulnerable people. People that will vote for Rama again in exchange of a bag of flour – in spite of their suffering.

Rama claims that the law does not allow for the incineration of trash. Why then did the “recycling industry” start building a new incinerator in Elbasan? Rama claims that customs have the competence to check the “quality” of the incoming trash. But if they are so competent, how come tons of marijuana manages to escape the country unseen? (Yes, Rama, we didn’t forget that your government has also presided over the enormous growth of weed plantations in Albania.) And then a final “argument,” that we should not “punish” and industry that employs so many people and works not at full capacity. But what type of work are we talking about, work that only brings disease and death? With a governmental discourse like this, full of half-truths that are propagated through a spineless media establishment with its tongue firmly wedged into Rama’s ass crack, the only transparent thing that will be left in Albania are the plastic waste bags from Italy dumped indiscriminately in the Albanian landscape.

Edi Rama calls everyone who fights against this monstrous law a “charlatan.” Well, I am a charlatan, and so are many others. Let us all be charlatans. It’s funny that Rama’s advisor for cultural management or whatever, Lorenza Baroncelli and her boss, Mattia Palazzi, threatened me and Exit.al with a court case for slander. I am still eagerly waiting the official indictment, but in the meantime let me invite our Prime Minister of Garbage to do the same. Because he should be called, in public and by all charlatans of Albania for what he is: a pathological, and pathogenic lier.