Behind the Himara Promenade – Exit Explains 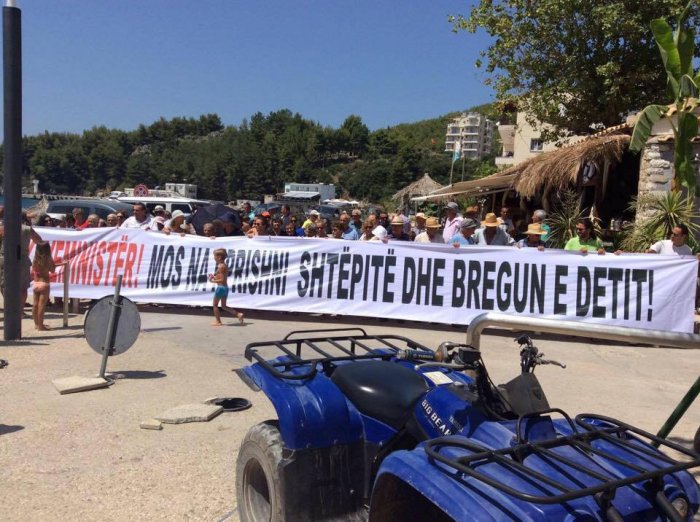 On Monday the inhabitants of Himara, a village along the Albanian Riviera, organized a protest against the destruction of 19 homes in the context of the urban masterplan, allegedly to make way for a new boulevard. All families were served eviction notices to leave their properties within five days.

The fact that both sides within the current conflict have brought the issue of ethnicity into play – the Greek government and local citizens insisting on their Greek and “autochthonous” ancestry, and the media linked to the government have called out those claims as having “no historical basis” – only complicates a story in which the expropriation of the 19 houses in Himara is but a small part, but at the same time an illustration of the way in which the broad masterplanning and “urban requalification” initiated by the Albanian government in the wake of the territorial reform is often at odds with property rights and the Aarhus Convention.

Setting aside the ethnical undertone of the discussion as mainly an attempt by both sides to further politicize the debate, the actual conflict situation is the direct result of no less than three partially overlapping urban projects and the failure of the government, in all three cases, to actually involve local parties into decision making processes.

The first urban project is the Riviera Competition organization by Atelier Albania, as mandated by the Ministry of Urban Development and Tourism and the Office of the Prime Minister. The competition was announced on October 1, 2014. Its form was an international design competition divided into three lots, and the aim was formulate as follows:

The purpose of the competition is to generate ideas that will lead to urban improvement detailed projects as well as public and/or private interventions. These will help each area foster a better identity while at the same time improve the area’s connection and interrelation with all of its surroundings.

The competition for Lot 2 of the Riviera Competition, including Himara, stretching from Palas Beach to Lukova Beach, was won by Belgian architecture firm Bas Smets, SON-Group, and artist Vadim Vosters. Their plan, which explicitly proposes to “include locals and inhabitants” in the design process, includes no specific references to a boulevard in Himara or the forced demolition of houses.

The winning plan remains vague on specifics, in part because the competition brief called for proposals to “push the boundaries of creativity while adapting to the local context and setting high design standards.” However, there are several images included in the proposal containing “applied land art” interventions into the coast line. What is striking in these images are the minimalist interventions into the landscape, keeping a focus on the surrounding natural landscape.

The second urban planning project that is related to the situation in Himara is the series of regional masterplans drafted at the request of the Ministry of Urban Development and Tourism in the wake of the national territorial reform, which drastically reduced the number of local government units. The national masterplan was divided into ten regional lots, which were announced in the Bulletin of the Agency of Public Procurement on August 10, 2015. Lot 6 encompassed the municipalities of Vlora, Himara, Saranda, and Konispol, and had a maximum budget of 76,758,000 ALL paid from the state budget.

The winner was only announced on March 29, 2016, several months after the winners of all other lots had been declared. A combination DEA Group shpk, Thymio Papayannis Associates SA was announced as the winner, with a bid of 61,617,093 ALL. It appears that cause of the delay were the complaints filed by both the winning combination, November 27, 2015, and the combination of C.E.C. Group and Erald-G on January 22, 2016, which not only had made a bid half a million ALL lower than the winning bid, but also was awarded a much higher score for their technical proposal (89.14 vs. 75.14 of the winning combination). The reasons why the tender was awarded tot DEA Group and Thymio Papayannis. The factual basis for the selection of DEA Group therefore remains unclear, as the individual proposals have not been released to the public.

Parallel to the development of the Regional Masterplan for Vlora, Himara, Saranda, and Konispol, the Albanian Development Fund (FZhSh), which is a direct extension of the executive power (nearly all of its council members are government officials), opened a tender for the construction of the Himara promenade on August 31, 2015, for the maximum budget of 217,996,613 ALL. This tender was based on a decision of the National Territorial Council (KKT), headed by Rama, regarding the “rehabilitation of the central segment of the Himara coastline.”

The project plan was supposedly based on the earlier winning proposal of Bureau Bart Smets. However, the maps appended to the KKT decision show clearly a large concrete promenade extending to the seaside, with stair descending to the beach. None of this plan seems to have been part of the winning proposal of Riviera Competition Lot 2, which instead spoke about “applied land art interventions,” not massive concrete pedestrian areas in front of a massive (and shiny) wall of “future” construction projects. The question that thus arises is: Why did the Albanian government spend €85,000 on a winning project without actually making use of its ideas?

On October 20, Fusha shpk, a contracting company close to the Rama government, was announced as winner by default, with a bid 194,068,814 ALL, the highest of three valid bids. All other six companies in the bid were either disqualified or failed to present a complete budget. This is a situation reminiscent to the tender of the first phase of the urban requalification of Skënderbeg Square, where again Fusha shpk won the bid by default.

Like any other construction project, there is an accompanying tender for the oversight on the construction work. This tender was announced on September 21, 2015, and canceled on November 16, after being reannounced on November 2. The same tender was announced for a third time on November 23, with the second announcement canceled because of “problems with the online portal for public procurement.” Finally, Taulant shpk won the bid, and was announced winner on December 28. The contract with Taulant was only signed on January 18, 2016, and one week later, the first buildings were destroyed by the National Inspectorate of Territorial Protection (IKMT).

Ever since the government signed its contract with Fusha shpk, the construction of the promenade has caused social unrest in Himara, leading up to the recent protests which also saw the involvement of the Greek government.

Apart from the potential damage the protests – and the defiant response of the Albanian government – can do to Albania’s international relations and prospects of joining the EU, Himara is also a case study in how public money is misspent on infrastructural projects that moreover raise social tensions.

First, the eventual Himara Promenade plan, in spite of being explicitly developed within the context of the Riviera competition, appears to have no direct relation to any of the ideas or suggestions proposed by Bureau Bas Smets. For a competition that was supposed to generate “new ideas” and set “high design standards,” it has had a negligible influence on governmental decision making processes.

Second, the protracted procedure surrounding Lot 6 of the National Masterplan, tendered out by the Ministry of Urban Development shows that more than solely market competition was at play. The discrepancy between publicly known information (technical evaluation, proposed budgets) and information that remains undisclosed by the government – and which seems to have been decisive in awarding the tender to DEA Group – is questionable.

Third, the tender procedure that awarded the Himara Promenade to Fusha again raises several questions. It should be noted here that the jury members of the Riviera competition partially overlap with those currently involved in the Skënderbeg Square renovation – also won by Fusha. Jury members Johan Anrys and Freek Persyn are both founders of architecture company 51N4E, in the past accused of corruption with Albanian tenders by the Belgian authorities, and Artan Shkreli is involved in the same project as Edi Rama’s Councillor for Territory. Another jury member, Eglantina Gjermeni, is Minister for Urban Development. Thus the majority of the seven jury members who selected the winning project for Lot 2 of the Riviera Competition, the construction of which was won by Fusha, are also working with Fusha in the center of Tirana.

Then finally, the timeframe between the signing of the contract between the Taulant shpk for the oversight over the construction of the Himara Promenade, and the actual start of the construction works almost immediately after show that any citizen participation in decision making or proper expropriation procedures, as laid out in the Aarhus convention, have not been followed.

What all these points of critique share is the following: intransparency in government spending and decision making lead to inefficient government spending, the waste of public resources, and, as is shown in Himara, can finally lead to social unrest. None of which is necessary.