Erzen Shkololli’s “Just Hanging Around”: A Place Beyond Belief? 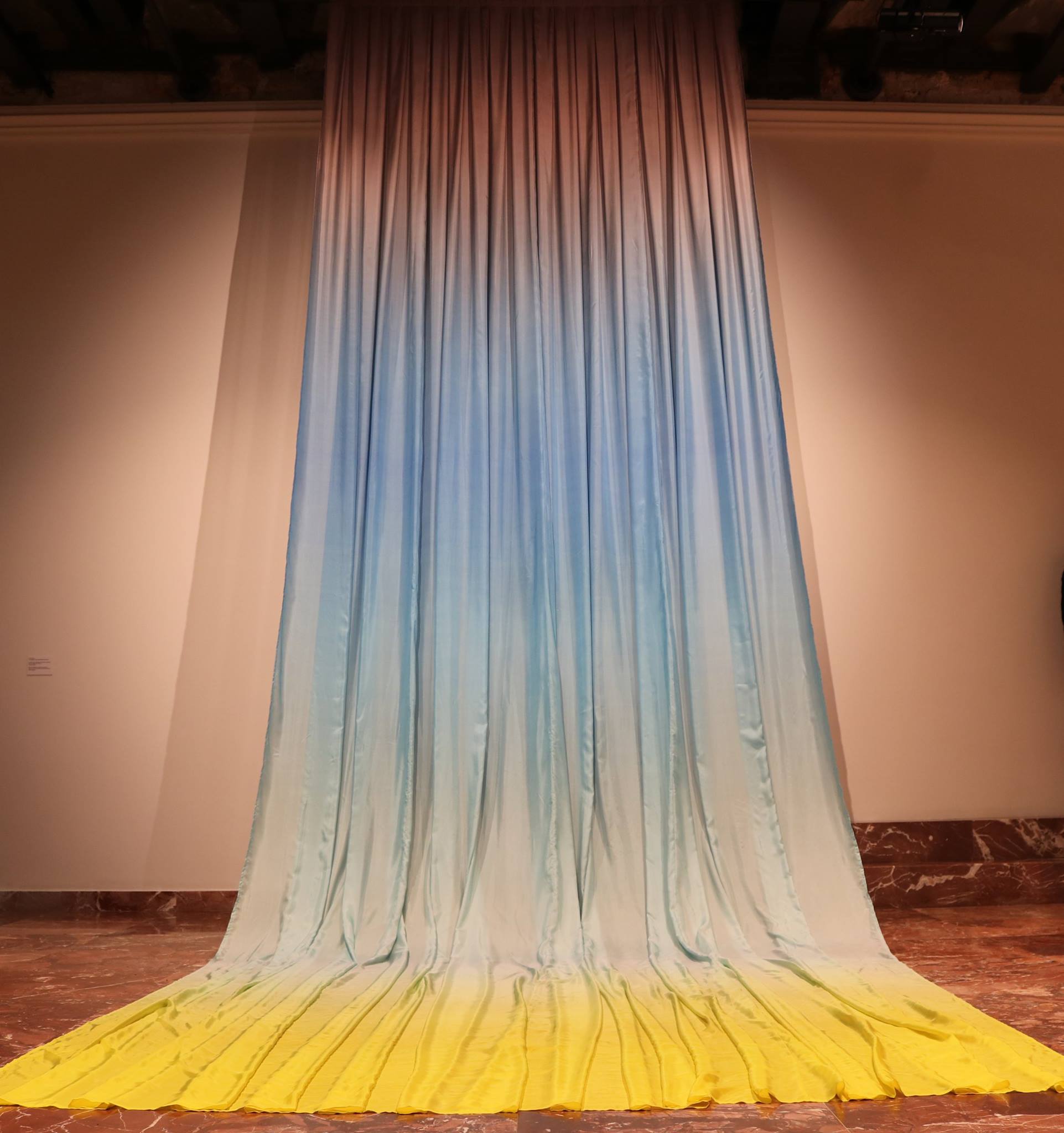 After two seasons in which the Center for Openness and Dialogue (COD), the exhibition venue at the Office of the Prime Minister (Kryeministria), basically operated without any curatorial direction, Erzen Shkololli was recently announced as curator for the third season at COD. His first exhibition, entitled “Just Hanging Around,” opened a few weeks ago on October 14.

Shkololli is not unknown in the Tirana cultural scene. As an artist, he was part of the first wave of Albanian and Kosovar artists entering the international contemporary art world in the late 1990s and early 2000s, and he participated in all three Tirana Biennials. As a curator, he curated “Onufri XI – Chosen Places” in the National Gallery of Arts in 2004 and a series of solo shows of Šejla Kamerić, Sokol Beqiri, and Simon Shiroka during 2014–15. From 2011 to 2015, he was director of the National Gallery of Kosovo.

It is not surprising that the COD has chosen a Kosovar as its first “official” curator. Ever since its opening, the space has been contested and criticized for being a mere stage for Prime Minister Edi Rama, and an environment in which any artistic gesture is immediately appropriated and overpowered by the political nature of the location – a major governmental building. Albanian artists and curators have by and large boycotted the COD, in a rare display of community.

The void left by Albanian artists and curators has been naturally filled up by their Kosovar colleagues, who are less embedded in the artistic and political climate of Tirana. It is therefore not surprising that in Shkololli’s opening exhibition, we don’t find a single Albanian artist.

The exhibition “Just Hanging Around” takes its title from Kosovar artist Flaka Haliti’s 2014 eponymous work. In fact, all works literally appear to be “just hanging around,” never – with one important exception – questioning the space or context in which they are displayed. Upon entrance, the exhibition, though well-produced and properly executed, exudes an utter harmlessness.

The opening statement gives us little information about the intentions of the curator. The first paragraph speaks about the “new techniques and materials” that are nowadays used in artistic production, ending with the silly cliché, “one might ask the question: is this art?” I am sure this question is still asked now and then, but the works on display in no way ever approach it. Every single work in “Just Hanging Around” tells me in a clear voice: “I am a legitimate work of art.” If anything, the question “is this art?” is a red herring – other questions are much more relevant.

There is some more phraseology about “captivating radiance on the level of aesthetics and beyond,” which bring us squarely into the realm of International Art English. Rather, it will be much more productive to look at how the art works are actually “hanging around” in the COD.

Entering the space, through a haphazardly placed and dysfunctional metal detector underneath Philippe Parreno’s “Marquee Tirana,” we are faced with six large aluminum panels by Peter Kogler, displaying a series of computer-generated images. Apart from the imagery, which all suggest intellectual or physical labor (brain, globe, bulb, gear, ant, diamond), the work has certainly been selected for its color scheme: black lines on a red metallic background. If Kogler wasn’t an Albanian nationalist, he now is. This is what I meant with “immediately appropriated.”

The work of Kogler is the most prominent, not because of its quality or content, but because it is the backdrop against which Rama is photographed whenever he hosts a public event in the Kryeministria. Previously, at the opening of the first season, the same wall hosted a large photograph, equally glossy, by Thomas Demand. In both cases the image is generated by artificial means. In the case of Demand, meticulously constructed photo sets; in the case of Kogler, computer algorithms. Rama is therefore never standing in front of a work that references reality. His backdrop always thematizes the artificial.

On the left of Kogler we find “Just Hanging Around” of Flaka Haliti, who represented her country at last year’s Venice Biennial. The work consists of a large silk curtain, dip-dyed in the colors of the Kosovar flag, blue–white–yellow (coincidentally also her signature color palette). Thus, both the Albanian and Kosovar national colors are present in the central hall, giving it the proper broad-nationalist (mbarëkombëtar) ambience. The only question mark is the suggestive stroke of grey at the top of the curtain, perhaps suggesting the “end” of nationalism and the erasure of all national colors under a haze of neutrality. All the while, the curtain gently dances in the breeze of the COD’s state-of-the-art air-conditioning system.

In the side room on the right we find Laurent Mareschal’s “Beiti” (“My House”), an installation of ground spices and linoleum covering the floor of nearly the entire room. If the central hall is the hearth of Albanian nationalism, the side room is the place of the exotic and oriental. The smell of the work, made from turmeric, ginger, zaatar, and several other spices, is enticing and the execution seems to reference the painstaking work of Tibetan mandalas. On closer inspection, however, it appears that the work was produced using a series of modular molds, allowing the spices to be “painted” in large patterns. This is not a “new technique”; rather, it is a very old technique that is appropriated, simplified, and automated to suit the timeframe of the western artist.

The paintings of Kosovar artist Vigan Nimani, exhibited in the hallways to the left of the central hall, seem weirdly anachronistic after the violence of all these “new techniques.” Hung much closer to their title cards, they seem like relics from some “museum,” where paintings obsessed with architectural structures – a theme that has become a commonplace in Albanian art – could be exhibited without shame. They appear completely decorative – “just hanging around” – just filling up wall space.

The “Künstlerportaits” videos of Peter Kogler in the “Forum” have a similar sense of afterthought. There was a space to be filled, and since Kogler has already done the main wall, perhaps there were a few videos he could contribute as well. The videos, all interviews with artists, have a vague feeling of Hans-Ulrich-Obrist-style interview-as-work so beloved by Rama c.s. (Unsurpringly, HUO curated a solo show of Kogler in 1996.) After one of the employees switched on the video (I had to ask for it), I watched part of an interview with Douglas Gordon. What stayed with me was his statement that art was a moral act. Then in what moral act, I thought, I am finding myself now?

My answer was quickly found, as I walked through the hallway back to the central hall, I came face to face with the key work of “Just Hanging Around,” Nathan Coley’s 2012 “A Place Beyond Belief.” Upon entering the exhibition from the boulevard, the work seems unremarkable, hung on the right wall, squished in between the black and red of Kogler, and Haliti’s blue, white, and yellow. However, with those works cut from the frame, it appears in all its shining irony. The work consists solely of an illuminated text, “A Place Beyond Belief.”

It is ambiguous which place the work refers to. Does it refer to its own nationalistic and politically charged surroundings? Is it referring to the country in which it haphazardly found itself? The subject itself is ambiguous, too. Who is talking? Is it Shkololli who is beyond belief – “I can’t believe where I found myself,” or “I can’t believe I curated this show” – or is it the place itself? A place where we find ourselves indeed beyond belief, beyond faith, perhaps even beyond hope – a place, an exhibition hall no less, that still bears witness to the “beyond belief” of 1967, when religion was constitutionally banned from the country, the “beyond belief” of the shameless appropriation of “religious harmony” for political propaganda, the “beyond belief” of having no other faith than bare, political power.

If anything is to be hoped from Shkololli’s future interventions into COD, if any, it would be that he more actively interrogates the space in which he is employed: the way in which its politics, ideology, and history shape and contort the works that are exhibited in it – and that he avoids covering up disruptive irony with bland titles and uninspired word pudding.

“Just Hanging Around” is open on unknown days at uncertain hours until January 14, 2017.