The Rama Brand Is Not Much of a Brand 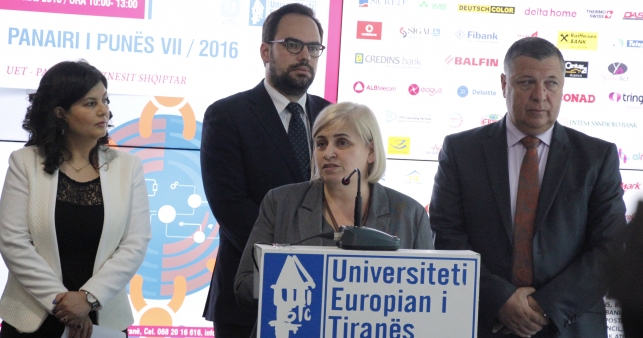 On Thursday, Milva Ekonomi, the Minister for Economic Development, was invited to a discussion with students and faculty from the European University of Tirana (UET). These types of events are a common occurrence now at this institution. The discussion focused on, as expected, the current economic affairs. The main points from the speech were reported in the media on the following day, and instantly attracted attention due to a claim made by the minister that the country currently has only one main brand to attract interest, namely the Prime Minister Edi Rama himself.

For a long time, Albanians have been known to heap special praise on their leaders, to the detriment of the country’s development. But the declaration itself was so over the top, so outrageous, that it became an instant hit on social networks. This was partly because of what Minister Ekonomi herself is supposed to represent – a technocrat, with so-called modern values, that should talk and act differently from the backward political militants of the past. But in fact, she has shown herself to be exactly that.

The discussion, though, was not centered solely on the role that Prime Minister Rama plays in dictating the economic fortunes of the country. Minister Ekonomi was able to touch upon many important economic issues and explain her position on many of them. Unfortunately, just like with her rating of Rama’s role, her position on other issues is deeply disturbing.

The first issue that Minister Ekonomi touched upon was the latest Doing Business Report where Albania showed some improvements. However, as was previously explained in other articles, the report can hardly be considered a serious academic effort. The rankings are dominated by countries that target specific legal measures, which are nonetheless uncorrelated with higher rates of entrepreneurship. The neighboring FYR of Macedonia has been a star performer in the report’s rankings. Yet, as we will see shortly, this has not allowed to country to attract further investment. In fact, there are no serious academics that rely on the Doing Business Report and Minister Ekonomi should steer away from it as well.

The second issue that the Minister discussed was taxation rates. The government has come under some criticism due to the increase in tax rates, but Minister Ekonomi wanted to stress that Albania’s rates were nonetheless not the highest in the region, as if this was some matter of success. The reality, however, is that the debate on tax rates is often a pointless exercise in intellectual futility, for two main reasons.

First, because it is difficult to comprehensively compare taxes across different countries, since there are various fees, rates, and tax levels for different services.

The second, and arguably, most important reason is that tax rates are not the main cost of doing business in developing countries. The tax rates in Albania, as well as the region, are lower compared to developed nations. But they are lower precisely because the country creates additional costs for entrepreneurs due to high corruption levels, high uncertainty, and the lack of infrastructure and support. Just last week, the government amended for the fourth time during the current legislature the law on tax procedures. Businesses in the country are simply unable to plan ahead due to the constant and staggering uncertainty they face. Rather than debating whether our tax levels are a few percentage points higher than the rest of the region or not, the Minister should focus much more on the other massive costs that the government dumps on private enterprises.

Another interesting point during the discussion was centered on monopolies. Minister Ekonomi neither denied nor confirmed their existence, but she claimed that more “reliable data is needed in order to fully assess the phenomenon.” This is simply a false claim, on two major counts.

The first is that the government itself is responsible for creating many of the monopolies through the usage of public-private partnership (PPP) agreements. They cover a huge range of activities starting from raw material extraction, exclusive usage of forest and fisheries, the provision of public services like medical check-ups and custom controls, all the way to public waste disposals, city parking lots, and kiosks which have now popped up all over Tirana.

The second reason is that government actually possesses a lot of data concerning this issue that can be made public but which it doesn’t. Data on bank deposit concentration or non-performing loans can shed a lot of light on how much of the Albanian wealth is controlled by a small number of individuals. Therefore, the Minister is flat-out lying when she says that better data is needed, since the government itself creates most of the monopolies and plenty of data already exists.

Last, but most importantly, came the claim that Prime Minister Rama is currently the most important brand the country has. While it would be futile to understand how one arrives at such a conclusion, it might be important to assess how valuable this brand than really is. The amount of foreign investment (FDI) that Albania has attracted is probably the best possible indicator of such a “prime-ministerial brand”. Now, collecting data on FDIs can be a bit of a chore, which is why often politicians like to lie about them. The Bank of Albania has recently changed the methodology it uses and only provides a couple of years worth of data after those changes. Thankfully, the World Bank has compiled data on FDI flows that attempt to achieve a consistency across countries and years. The figure below shows a direct comparison of countries in the region. A few trends are worth mentioning:

First, Macedonia, the star performer of the Doing Business Report, is not much of a performer in real life showing how truly meaningless the ranking really is.

Second, Albania has weathered the global financial crisis relatively well compared to neighboring countries that saw foreign investment dry up for a period.

Third, and most importantly, it seems like Prime Minister Rama has added nothing of value to the attractiveness of the country. In fact, FDI flows have slightly decreased following his electoral victory. It would seem like Rama’s brand is really not that valuable outside the country.

Minister Ekonomi had a great opportunity to address some glaring issues regarding the Albanian economy. In an academic setting she should have spoken in depth about some of the hard truths that the country faces. Instead she used the opportunity to evade questions, rate dubious studies, and make some old-fashioned political propaganda.