The Farmer’s Market underneath Skënderbeg Square 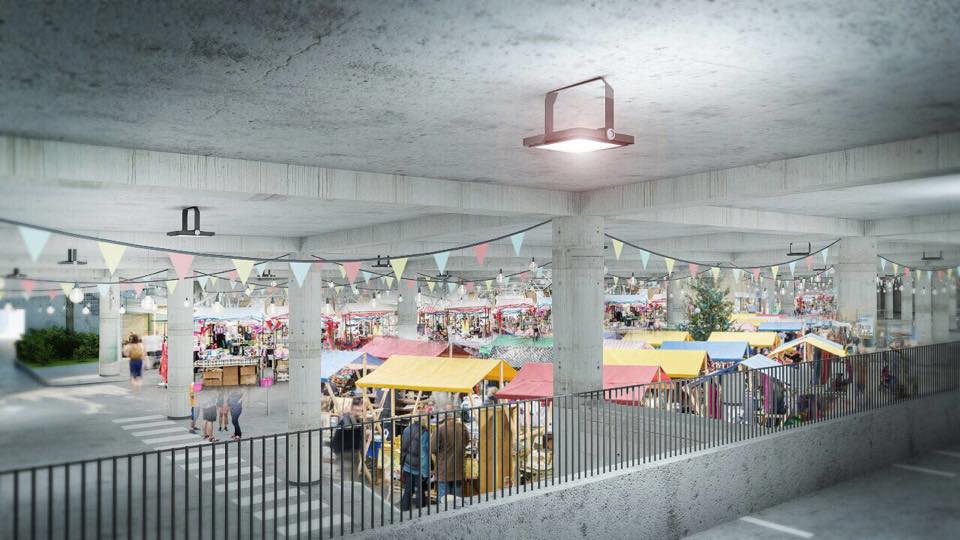 Rama’s announcement of this new add-on to an already very costly construction project came precisely in the period between the closing date of the Skënderbeg Square Phase 1 tender on July 29, and the announcement of the winner on August 15. This tender was also won by Fusha shpk.

Neither the original plan partially implemented during Rama’s period as mayor, nor the technical specifications of the first phase of the urban requalification of Skënderbeg Square mention any possible parking garage; the only underground works included in the project are the tubes for the fountains.

The technical report accompanying the tender, drafted by Belgian architecture firm 51N4E, gives more information about the “multifunctional” nature of the two-floored garage:

According to the initial request of the Municipality we consider this parking to be a multifunctional space with a hybrid functionality, like the square above. So that this space in the center of Tirana doesn’t only serve as a parking space for cars but possibly also for other activities organized by the Municipality of Tirana. Such activities may be a farmers’ market on Sunday, various fairs that can be organized on different days of the year such as the Book Fair, Car Fair, Construction Fair, Culinary Fair, Artisal Arts Fair, etc.

According to the report, each Sunday half of one of the parking levels would be “reserved” for the farmer’s market.

It remains a question, however, why artisal arts or book fairs would need to take place in a parking garage underneath Skënderbeg Square, while the square above it – as well as the many indoor locations around Tirana – offer a much more appropriate context and better facilities.

Like the lucrative tenders for the first phase of the urban requalification of Skënderbeg Square and the Himara Promenade, Fusha won the tender for the parking garage by default. The two other competitors, Alko-Impex General Construction and Hastoçi shpk, were both disqualified.

As is clear from data aggregated by Open Spending Albania, Fusha’s income from government has doubled since the beginning of the Rama Government, with the tenders granted for the first phase of the Skënderbeg Square urban requalification project and the underground parking bringing up the income of 2016 close to that of 2015.

Albanian Government Seeks to Restart Thermal Power Plant in Vlora
10,000 Albanian Businesses to be Investigated Over Low Salary Declarations
Over 23,000 Regular and Irregular Migrants in Albania in 2020