Basha Apologizes for Past Mistakes, Vows to Reform Party 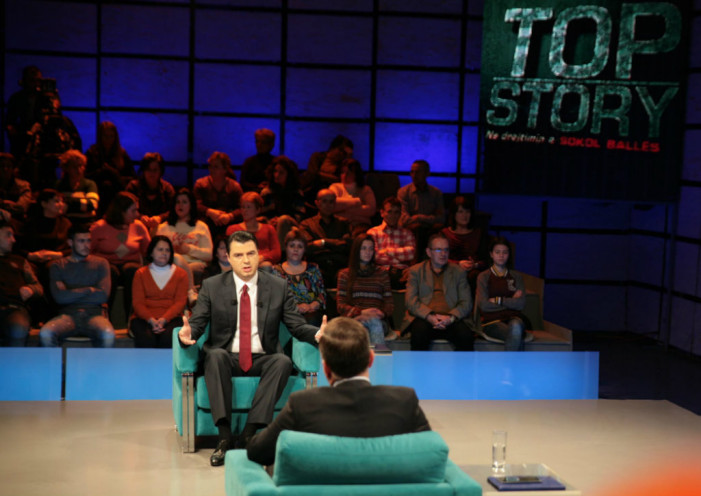 Yesterday night, Democratic Party (PD) frontman Lulzim Basha addressed the need for political party and governmental reform in Sokol Balla’s talk show Top Story. Among other topics, he also spoke about the need to open up his party to Albanian citizens.

Recently, Prime Minister Edi Rama had accused Basha of blocking the opening of accession negotiations with the European Union by proposing amendments to Albania’s request to the European Commission.

To these allegations Basha responded that the PD is in favor of the recommendation to open accession negotiations, but that it is not the role of government to request the start of the negotiations. “It would be like a student who proposes his own grade,” he said. “But if it were in my hands, I would sign today.”

Basha also stressed that the PD is fully committed to the integration of Albania into EU, and that it was after his party that had made the first steps by facilitating Albania’s accession to the NATO in 2009 and visa liberalization in late 2010.

Reforms in the PD

Basha spoke at length about the challenges that Albanian political parties face moving toward the 2017 elections.

Nowadays in Albania the political parties are the problem, they are held hostage by their leaders. The parties and the way in which the political system has been built has turned into the Albanians’ problem. I will start begin to change the Democratic Party.

These problems do not exclude Basha himself. As he indicated, without being specific, that he accepted and apologized for “the mistakes” of the past.

As part of the party reforms Basha promised that the PD will be the first political party to formally introduce a “one member, one vote” system, including for the nomination parliamentary candidates. He also plans to hold party leader elections every two years, in order to create more possibilities for alternatives and party-internal competition.

In a political context in which party leaders often continue to rule their parties for many years without renewing their mandate and aspiring deputies are only on paper “nominated” by ordinary party members, these two reforms – if truly implemented – are likely to shake up the current party structure. “Changing the Democratic Party today,” Basha said, “we will change the whole of Albania tomorrow.”

Opposition leader Basha several times attacked Prime Minister Edi Rama, especially regarding the non-implementation of the decriminalization law. Although the judicial system has been particularly ineffective in actually removing politicians with a criminal record from office, Basha suggested that Rama himself has the executive power to remove corrupt politicians from his own party.

He mentioned the fact that the PS Mayor of Kavaja, Elvis Rroshi, has been convicted for group rape in Italy and drug trafficking in Switzerland, while there is moreover a large group of deputies with criminal track records inside and outside Albania. “Rama has the legal right to fire them,” Basha stated. “We live in an Albania where crime, drugs, and politics have become one against the Albanian citizens and this is a problem that we cannot close our eyes to.”

Following up on the recent progress report of the European Commission, MEP Eduard Kukan indicated that the 2017 elections will be an important test in the context of the EU accession process.

After the passing of the constitutional reform in July, Basha had argued that the only way in which fair elections can be held next year is if the transition toward the elections is governed by a technical government. In his Top Story interview, he reiterated his worries about the elections, stating that “the economy of Albania is kept hostage by a clique of officials and oligarchs,” and that the proceedings of the illegal drug traffic will be used to “buy” the next elections.

These are some of reasons why Edi Rama cannot be the prime minister that guarantees free and honest elections. It is my duty to create awareness among as many as possible Albanians that this is not just about the ambitions of Lulzim Basha and the PD, but about their fate.