The Destruction of the Sigurimi Archives 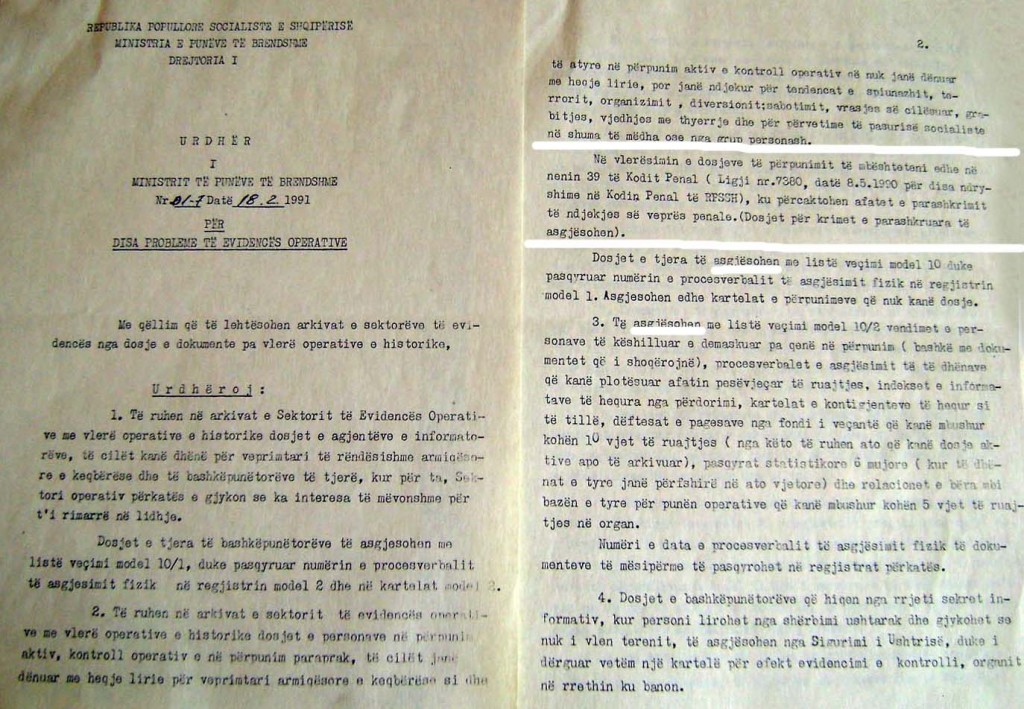 The problem of lustration and the opening of the dossiers of the State Security (Sigurimi) was one of the main problems that we encountered since 1991.

Within a few months after coming to power in March 1992, we drafted a law to those ends based upon the laws of Germany, Czechoslavakia, and Hungary.

For the drafting and implementation of law we first had to acquaint ourselves with the systems of the Sigurimi and its documentation practices in the Archive of the former Ministry of Interior Affairs (MPB), which was kept in a bad and scattered state. We charged a special working group with the work, and it presented a full report in 1995.

According to the preliminary data it appeared that a large number of dossiers had been “destroyed” (asgjësuar) – the term used in the pertinent orders – with the argument that, according to the directors of the former MPB, with the decriminalization of the infamous article 55 [on “agitation and propaganda against the state” – Exit], the dossiers were now “unnecessary.”

It has to be said that there existed a “Regulation for the Operational Evidence of the Organs of Interior Affairs” (No. 01-27, dated August 23, 1986), which determined which documents “are kept indefinitely” and those which are to be “destroyed” after a certain period. But this regulation was violated, and under the pretext that they no longer had any value there was a massive destruction of documents during the period from the end of communism until the moment the Democratic Party came to power.

In the archives there are still traces or witnesses of such actions, for which those who gave the orders have been criminally prosecuted and punished.

A radiogram from Minister Simon Stefani

In this respect, the “urgent” radiogram that former Minister Simon Stefani sent to the Departmental Directors of Interior Affairs on July 2, 1990 (No. 277–278) is of interest:

In relation to the processing of party members and candidates and saved materials is to be acted as follows: […] those [materials] for those who are reviewed by the first secretary of the region […] are to be saved only in case of espionage and organization, those that have been saved only because of agitation and propaganda and which in the new law [the removal of art. 55 – Exit] are no longer considered are to be destroyed immediately.

The destruction is to be done based on the regulations.

This job is to be finished before July 15.

It seems that this was enough to continue the fast pace of the destruction of the testimonies of the violence of the communist regime.

A telegram from Minister Hekuran Isai

Of special interest for that period is another telegram of Minister Isai, dated December 15, 1990 [a week after the beginning of the student protests – Exit], sent to the Departmental Directors of Interior Affairs (No. 615), with the following content:

To be destroyed without waiting for the representatives of the Ministry, all dossiers of collaborators, of the processing of other dossiers that have been selected for destruction, as well as file cards and excerpts, evidence books of operatives that are no longer in use, and temporary documents selected for destruction of the levels secret, A res personal, and SRV. Investigative and judiciary dossiers are to be sent to the archive, including those that haven’t completed their five-year term […].

Those are normal actions that are done according to your request, so they are not related to the situation.

Inform us about the execution of your duty.

The penultimate sentence shows the preoccupation [of the communist regime – Exit] with the students and citizens of Tirana creating an opposition party (Partia Demokratike), rather than one of “students and young intellectuals” according to [First Secretary] Ramiz Alia’s idea for societies and pseudo-pluralism. In this context it is useful to remember the wise saying that “language goes where it hurts.” This justification speaks clearly about the aim of this action, in opposition to the Decisions of the Council of Ministers and Law for Archives.

Another order from Minister Isai

Meanwhile, the political situation in Albania changed vehemently and rapidly. In the middle of February 1991 the students of the University of Tirana went on strike, supported by the citizens of Tirana, holding a clear position against the regime and figure of Enver Hoxha.

Exactly on February 18, Minister Isai sends Order No. 01-7, entitled “About several problems regarding Operational Evidence,” with the aim to “relieve the archives of the sector ‘Evidence’ from operational documents without value.”

Among others, the Order required:

1. To save in the archives the dossiers of informers that have given [information] about important hostile and ruthless activities when the operational sector judges that there are further interests to recontact them later. Other dossiers of collaborators are to be destroyed with specified lists […]

2. To save […] the dossiers of people that are actively processed, operational control in preliminary processing, […] people convicted for hostile and ruthless activities as well as those that haven’t been convicted […] but have been followed for spying tendencies, terrorism, organization, diversion, sabotage […]

5. […] dossiers and file cards for those who deal with data about hostile and ruthless activities are to be opened […]

It continues with other requests for archiving and destruction, as well as for new recruitments.

Officials continue to give such orders until January 1992. Any comment on those orders is, I think, superfluous.

Lustration and opening the dossiers

Besides called for their opening, the media have until today made on purpose a lot of (divisive and oppositional) noise about the “disappearance” of dossiers, in such a way that the aim of the entire movement for decommunistization (dekomunistizim), i.e., lustration and the acknowledgment of the system of violence through facts, among which the dossiers, remains obscure.

Before the lustration process and opening of the dossier can begin, public opinion needs to be informed in detail about the state of the documentation that has been saved – registers, different dossiers, work books of operatives, file cards, orders, and other useful documentation – in order to be convinced that and to what extent this process can be completed, but also when these materials have been damaged during the past years.

The public is told, or rather, misinformed, that only 17,000 dossiers of collaborators and former persecuted persons have been saved, which is both true and untrue (e.g., “according to information from 1995 there were 12,602 registered dossiers of collaborators while the ShISh [the current secret service – Exit] only has 6,522 dossiers,” while the above-mentioned information is clear that that’s the amount registered in Register Model 10, while in the archive there are 6,522, as much as there are today), thus preparing public opinion for the results of the implementation of the government’s law.

Lustration is the act of eliminating from executive and legislative political positions, diplomatic representation, leading positions in media and educational institutions, and so on, those who during the dictatorship held high posts such as members and candidates for the Plenum of the Central Committee of the Labor Party of Albania (PPSh), ministers and deputy ministers, deputies, regional first and second secretaries, chiefs of police and State Security, legal and illegal operatives, investigators, those of followed the school or courses of the Sigurimi, and so on.

Only in this way the process of decommunistization, lustration, and the opening of the dossiers can be completed that is necessary to depart for once and for all from the past.

A longer version of this article was published by Respublica in March 2016.