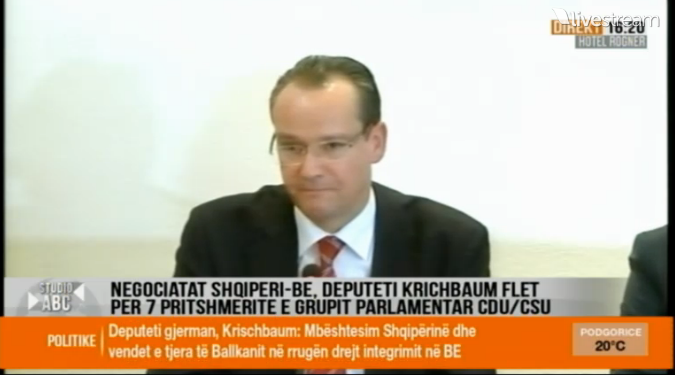 After visiting Prime Minister Edi Rama today in Tirana, chairperson of the EU Affairs Commission in the Bundestag, Gunther Krichbaum, has given a press conference in which he announced that the CDU/CSU parliamentary majority will vote against the opening of EU accession negotiations with Albania, in spite of the recommendation of the European Commission (EC).

According to Krichbaum, the main problems are the absence of progress in terms of the fight against corruption, organized crime, and drug traffic; electorial reforms, implementation of the decriminalization law; and the judicial reform, which remains blocked at the Constitutional Court.

According to sources of Exit close to the Bundestag, the party of German Chancellor Angela Merkel, who is seeking a fourth term next year as German head of state next year, has drafted a list of seven expectations that need to be fulfilled in order for the Bundestag to approve the opening of the accession negotiations. Their fulfillment should be reflected in the Progress Report of spring 2018:

The declaration of Krichbaum comes after Speaker of Parliament Ilir Meta met Norbert Lammert, the President of the German Bundestag, this morning in Berlin. Lammert stated that:

As regards the concrete membership of the European Union, Albania can count on Germany, as I emphasized during our meeting, even for the perspective of the opening of accession negotiations, but the criteria need to be fulfilled. Without a proof of the fulfillment of the duties of the agreement there can be no membership, and we happily support all the attempts, especially of the Albanian parliament, in the framework of the fulfillment of the legal duties, in a way that the accession negotiations are approved, because also these require their time, with the hope of having a successful result.

Prime Minister Rama is expected to travel to Germany to meet Chancellor Merkel in four days.