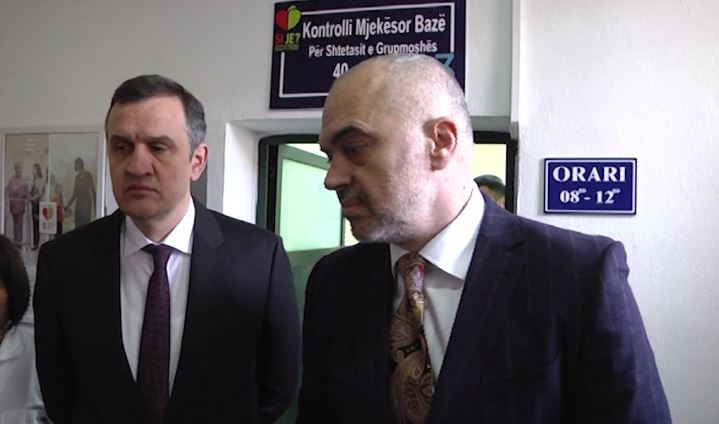 In response to charges filed by the Democratic Party (PD) against Minister of Health Ilir Beqaj for abuse of office over the concession for free healthcare check-ups, the Prosecution of Tirana has started an investigation.

This is not Minister Beqaj’s first criminal investigation. Since December 2015, the Prosecution of Heavy Crimes has been already investigating the free check-ups as well as two of his other concessions: for the sterilization of medical equipment and the hemodialysis service. In context of these investigations, the Prosecution has questioned dozens of Ministry of Health (MSh) employees and confiscated documents.

The cost of these concessions, or public-private partnerships, put a heavy toll on the national budget. In total, the MH concession for free check-ups, sterilization, and hemodialysis cost 3 billion lekë (~€21.8 million) per year for the next ten years.

The sterilization of medical equipment concerns a 10-year contract worth 9.7 billion lekë (~€71 million) without VAT. It is the largest concession given by the Ministry of Health.

Last year, Reporter published an investigation of the tender procedure that awarded the contract to a consortium of Investital llc, Servizi Italia spa, U.Jet srl, and Tecnosanimed. Investital, the main applicant, is registered as a company in Kosovo and is owned by businessman Ilir Rrapaj. Rrapaj has no experience working in the field of medical services; his company in Italy – in the “artisanal” field – has only one employee and little capital.

After the election victory of the Socialist Party (PS) in 2013, Rrapaj returned to Albania and developed a close relationship with Minister Beqaj, introducing him to his Italian business partners. Rrapaj took part in a government event in November 2013, and in return Minister Beqaj traveled to Perugia in December 2013 where they met again. Minister Beqaj made several more trips to Perugia, signing several agreements with local institutions, always in the presence of Rrapaj.

A memorandum of collaboration signed between the University of Bologna and the Albanian Ministry of Health in December 2013 includes the collaboration of a local group of medical companies, Polo Biomedical Umbria. The three Italian companies Servizi Italia, U.Jet, and Tecnosanimed are all part of this medical group.

The tender procedure itself, opened on May 4, 2015, was heavily contested. Besides the consortium led by Rrapaj’s Investital, another Italian–Albanian consortium took part, led by the Durrës-based company Action Laundry, which made an offer 25% lower than the Investital consortium. Nevertheless, Investital won with 73.89 points against Action Laundry’s 42.83.

After an official complaint of Action Laundry at the Council of Public Procurement (KPP), MSh is forced to reevaluate the tenders, now awarding 91.03 points – in inexplicable 20-point increase – to Investital and 45 to Action Laundry.

To questions of Reporter regarding the difference in value of the two offers, MSh responded that the 1 billion lekë per year floated in the media was “utterly false,” and a lie created by the competing consortium, artificially inflating the number of surgical interventions. Nevertheless, the project budget of 2017 now values the annual costs of this concession at 1.23 billion lekë (~€9.1 million) per year.

A new company that was created by the consortium of Investital and the three Italian medical companies to manage the concession, Saniservice shpk, is 40% owned by Rrapaj, even though he has little to no experience in the medical field. Servizi Italia owns 30%, Tecnosanimed 15%, and U.Jet 15%.

The contract for hemodialysis is also for ten years and worth a total of 8.6 billion lekë (~€63.5 million) without VAT. It concerns the offering of hemodialysis services in Tirana, including investments to reconstruct the pertinent medical facilities in Vlora and Shkodra, and the creation of three new centers in Lezha, Korça, and Elbasan according to medical standards.

The investments are necessary, because the capacity Hospital Center of the University of Tirana (QSUT) is not sufficient to service all patients. Many patients are therefore treated in private hospitals, such as the American Hospital (Spitali Amerikan) and Hygeia Hospital. During 2014, the American Hospital has received about three times more patients from the QSUT than Hygeia.

MSh opened the procedure for the hemodialysis tender in May 2015. According to another investigation of Reporter, the company representing the consortium that eventually won the tender, Evita shpk, was a company dealing in pharmaceutical products. According to public documents, Evita, founded in May 2013, grew quickly under the new Rama government, from a capital of hundred thousand lekë (~€736) to a capital of 30.1 million lekë (~€221,735) in 2015.

The owner of Evita, Majlinda Fetiu, has no background in pharmacy or the medical profession; she is however a relative of the administrator of the American Hospital in Tirana, Klodian Allajbeu. The administrator of Evita is a former employee of the same hospital, and Evita has as one of its official addresses the second floor of the American Hospital building.

Evita won the tender for hemodialysis in a competition with eight other offers, being the second most expensive. It is unclear on the basis of which criteria Evita turned out to be the preferred company; as said it has no prior experience whatsoever in offering hemodialysis services.

After Reporter published its investigation, government propaganda website Transparenca revealed that Evita had competed in a consortium together with the American Hospital.

Thus the American Hospital has effectively pressed Hygeia out of the market and created a virtual ten-year monopoly for a fixed and pre-determined price, through a procedure that favored its prior quantity of patients, and not necessarily the quality of the service offered. As in the case of the sterilization concession, the opaque point awarding procedure seems to tailored to one specific candidate, rather than guaranteeing a fair competition.

In July 2016, four people died in the hemodialysis clinic of the American Hospital, after one patient set fire to another patient by dousing him in gasoline, allegedly over a conflict about whose turn it was. The entire clinic burned out, while the American Hospital pressured national media to remove their name from the news, threatening to withdraw advertisements. Moreover, it refused to provide any details on the hemodialysis procedure, the available medical equipment, or the conditions under which the medical procedure was executed.