“Damned If You Do, and Doomed If You Don’t” – Taking the Bus in Tirana 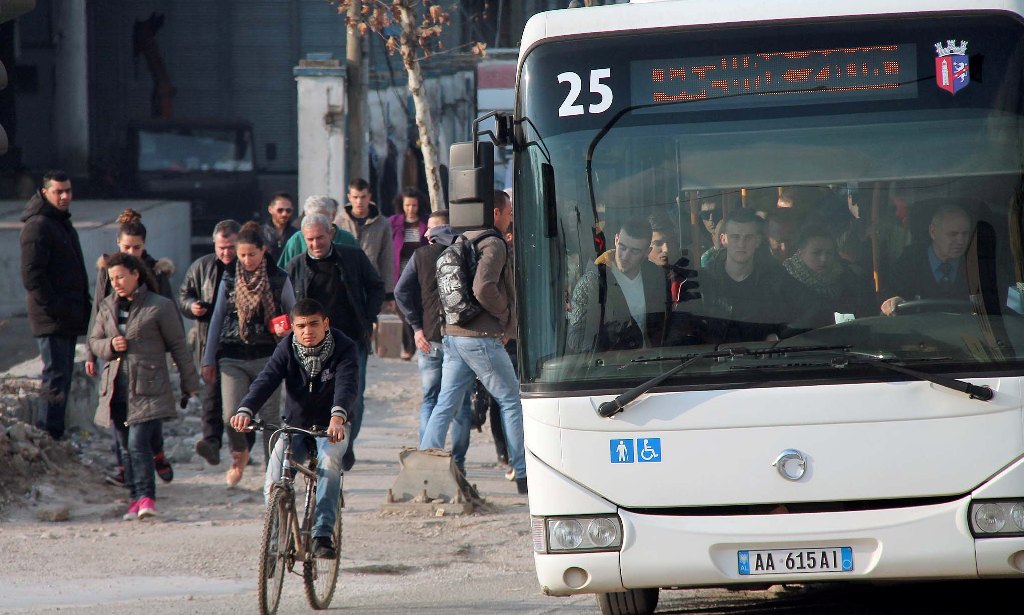 As the city I live in is constantly under the siege of angry drivers trapped in traffic, I decided to leave the car home and commute to work by public transportation. I am incapable of riding a bike, so my only hope was to use any of the bus lines operating in Tirana, which conveniently pass close to my residence.

The reaction of everyone I told my decision was something like: “Wow, good luck with that!” or “You are not serious! It will take you double the time if you use the bus!” Living in a city notorious for the stigma against the use of public transportation, I was certain that nothing could be worse than driving through clogged roads on a daily basis. The last time, I was stuck in the traffic for two full hours, just six km away from my destination, so I was decided not to experience that hassle again. I had seen a few bus lanes and I was counting that a skillful bus driver could make my life easier. My expectations were miserably crushed as soon as I entered

Unfortunately, I will tell you what you already know. Bus traveling in Tirana is unreliable, slow, suffocating, chaotic, and time-consuming. After waiting for the bus for more than fifteen minutes, as soon as I entered it (“entered” is a euphemism here, as the crowd was forcefully pushing me towards the entrance), I realized that it was not going to be an easy ride.

Inside I saw around forty people packed in the “blue box” of what is ironically called “Zoo line,” suitable for not more than twenty-five people. The bus was so crowded that one could barely breath normally.

To my misfortune, there were no bus lanes on the route I took, so I still suffered the traffic jam. At least I am not driving, I thought, but I was equally stressed while standing up in that tin box and observing pedestrians from the window, envying their freedom and good luck.

It took me around fifty minutes to get from the Artificial Lake of Tirana to the city center, standing on my feet in an overcrowded, tiny bus, which would stop anywhere the passengers would ask the driver to. I did not see a single official bus stop along the entire way.

Even though I got off at the city center, my suffering was not over yet. I had to take another bus to reach my destination. Because of the construction work taking place around Skënderbeg Square, I could not find it. I asked around and after several wrong leads, I found the provisional bus stop and a bunch of people waiting for it. Meanwhile I had lost another valuable ten minutes.

I waited again for more than ten minutes for the bus to leave and only after many of the people started complaining, the bus started to run. There were no schedules displayed, no maps or stops or anything like that. There was no air conditioning either. On the contrary, because of some malfunction, the windows of the bus were wide open, letting the icy wind of a cold November day cruelly blow on my face.

I was already missing the crowd from the previous bus, which at least had kept me warm. Different from the first bus, people here looked irritated. The ticket guy (one buys bus tickets only on the bus) would take your money, but not give you a valid bus ticket. As far as I understood, even though the bus operated within the borders of the Municipality of Tirana, its final destination was the Municipality of Vora, and so the public authorities of both cities had not figured out the ticketing system yet.

I witnessed several conflicts between the conductor and the passengers and among the passengers themselves, because of unjustified stopping requirements, lack of tickets, or because of some ordinary reasons such as pushing, loud speaking, harassments, etc. I could not wait to arrive at my final destination, which lasted for another forty-five minutes. Finally, my daunting challenge with public transportation in Tirana was over for good. Although I felt tired and frustrated for losing the entire afternoon commuting, what better described my feeling for the day was “anger.”

How is it possible that a city (the capital city) with less than a million of inhabitants has spectacularly failed to provide decent public transport for more than two decades? Besides many of public transport financing models, many of the limitations that public transport faces nowadays in Tirana can be easily improved by minor investments, such as dedicated bus lanes, or schedules, maps, and a little air conditioning!

Contrary to many countries in the world, where public transport is conditioned by the urban sprawl and its ability to accommodate suburban commuters, in Tirana public transportation is dysfunctional even in case of the ever-present bus lines.

Many blame the existing operating structure of public transport, having a bus system owned and operated by different private entities. However, Tirana has experiences both models of operation, both by a single public entity and by multiple small private operators. Neither was efficient in ensuring a good public transport. Just recently, private entities increased the ticket fare by 33%, leading many of the citizens in protests against the Municipality of Tirana, responsible for monitoring and authorizing the price change.

In an attempt to pacify the opposing voices against the increased fare, the Mayor of Tirana responded that the new fare is essential for improving the quality of the existing public transport and he promised a cleaner, faster, and more reliable public transport system.

He also promised that monitoring mechanisms and punishment for abusive operators would be stronger and that he personally would take care of this. Ten months after this promise, public transport in Tirana is in the same conditions as before: slow, unreliable, uncomfortable, and more expensive!

As a joke, people say that commuting in the city is becoming like a stroll through Purgatory, where you are damned if you use your private vehicle, and doomed if you rely on the inefficient public transportation. Since we are suspended in a vacuum, I guess one can still live with the hope of flying in the near future, which seems to be a by far more realistic option than the famous promised tram of the previous mayor.