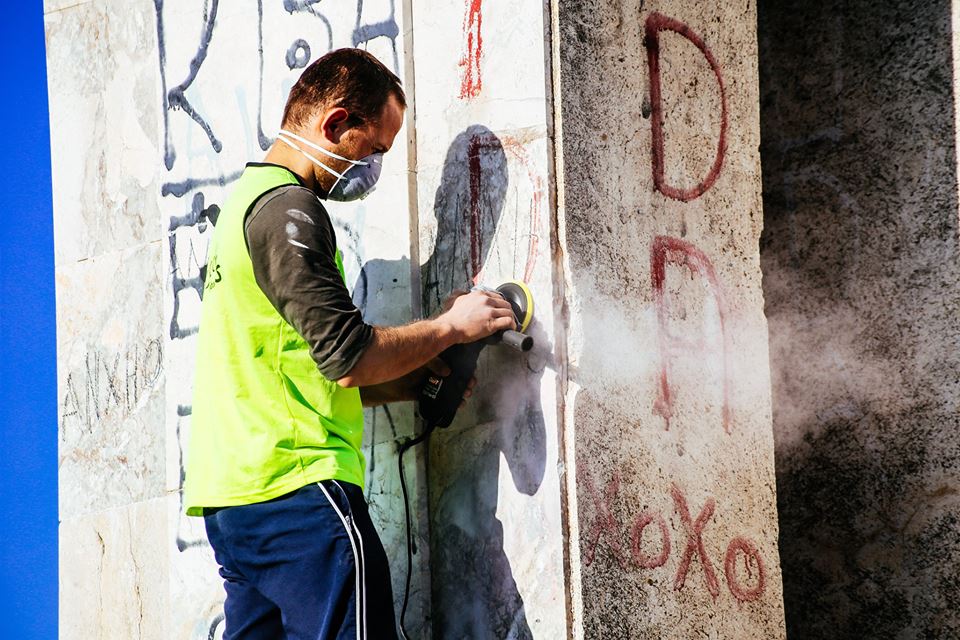 Two days ago, Exit published an opinion piece dealing with the “whitewashing” of lapidars (monuments from the communist period) in Albania by the current government.

Until recently, the precise procedures through which these monuments, which are not protected by the law on cultural heritage, were “restored” remained unknown. But yesterday Minister of Social Welfare and Youth Blendi Klosi posted a video of such a restoration action on his Facebook. The video shows a group of “activists,” comprising employees of Ecovolis of the Ministry of Social Welfare and Youth, “cleaning” a lapidar in Tirana during a “voluntary action.”

The monument in question is the Lapidar of the Artillery on a hilltop overlooking Tirana, commemorating a military action of the artillery forces during the liberation of Tirana on October 18, 1943. It was constructed in 1968, designed as a collaboration between architect R. Kote and sculptors Kristaq Rama, Mumtaz Dhrami, and Shaban Hadëri, who also designed the Mother Albania statue at the National Martyrs’ Cemetery and the Monument of the Independence in Vlora. Considering the artists involved, this lapidar may be considered of particular cultural importance.

Yet on the video it is clear how the “activists,” without any prior training in cultural heritage preservation, restoration techniques, or historical knowledge, “clean” the graffiti off lapidar by means of an electric grinder. This is method analogous to ripping off the skin in order to get rid of a tattoo, and irreparably damages the monument.

The preservation brief of the US National Park Service, on of the first Google hits on “removing graffiti from marble,” clearly states that

mechanical sanding or grinding […] will cause damage to masonry and, in most instances, should never be considered as a method of removing graffiti from historic masonry. Abrasive methods used mistakenly by untrained workers to remove graffiti usually result in etching the outline of the graffiti permanently into the masonry.

The manual further suggests that “most graffiti can be removed without damaging the masonry with proprietary graffiti-removal products and commercial paint strippers containing organic solvents.”

The other “restoration” activity undertaken by Minister Klosi’s group is plastering the sides of the basement of the monument. Although it is true that the sides are damaged, this is not the result of weathering, but because of the forceful removal a bronze bas-relief designed by Rama, Hadëri, and Dhrami after 1990. Plastering the base is again a completely amateuristic restoration method that does not acknowledge the complex history of this site of memory, but just “makes it look good.”

The action supported by the Albanian government once again shows a lack of understanding and professionalism when it comes to dealing with cultural heritage property in Albania, even at the time the liberation of Albania is celebrated.