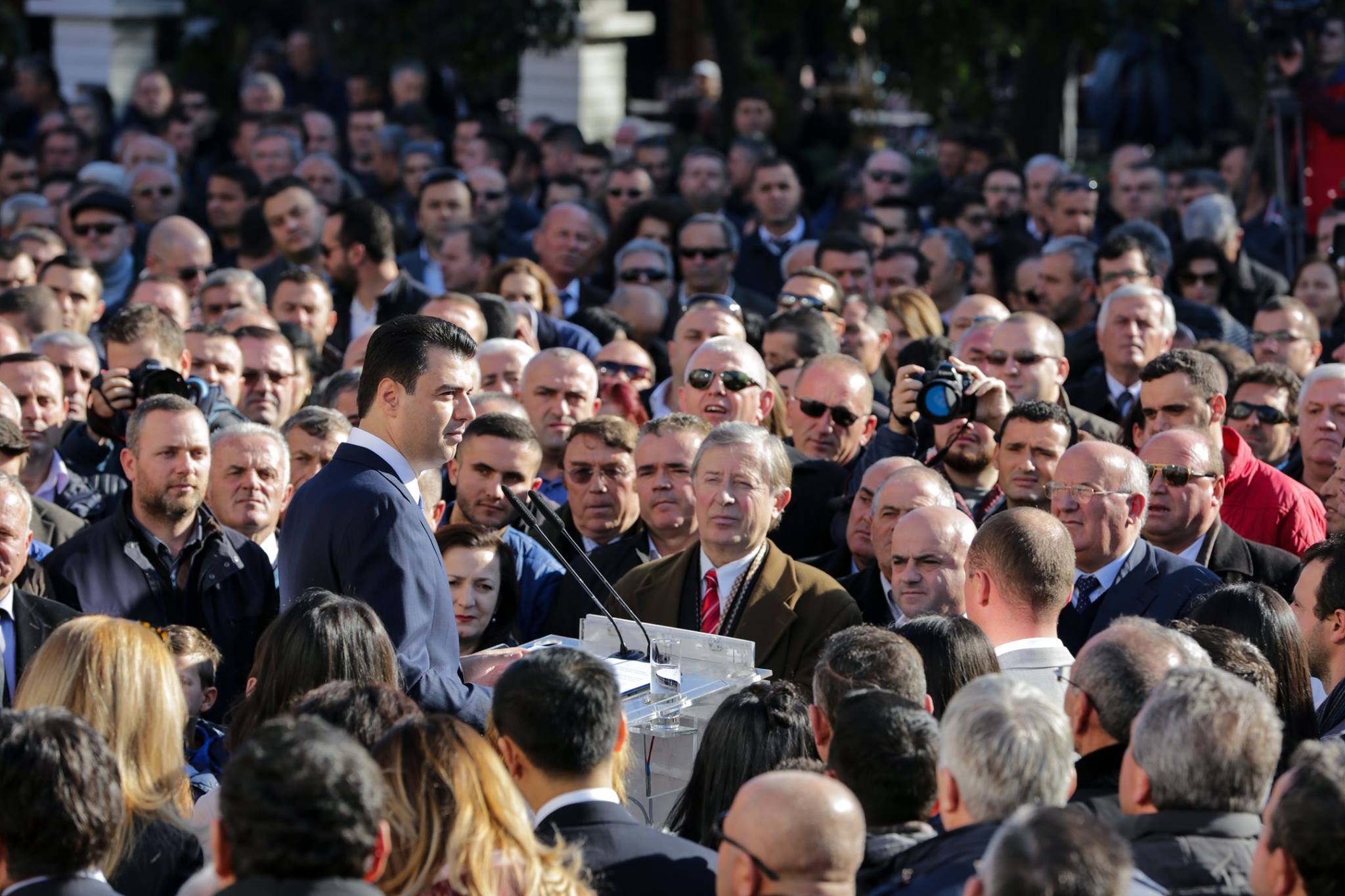 On the 26th anniversary of the Democratic Party (PD), party leader Lulzim Basha announced his program for the modernization and democratization of the party ahead of the 2017 parliamentary elections.

After previously promising that 35% of the parliamentary candidates would consist of members from the youth movement of the PD, Basha now announced a limitations of all mandates of party leader to a two-year term, and the full democratization of the internal election process.

Basha started his speech with a bleak evaluation of the current Albanian political landscape:

Honoring the past and respecting our accomplishments cannot blind us for the present that we have, and the future where we’re going. Everything we have done cannot hide or justify what we have not done, or what we have done wrong.

The partnership between politicians and the clients of the party has destroyed every possibility for a free market economy. The partnership between politicians, media, and civil society has weakened oversight mechanism and the control of the government. The fever to take power at any cost has pushed politics in the claws of crime and brought criminals to the height of power.

The victims of this politics are the simple people, which today have been betrayed and abandoned in their poverty and inability.

The internal party reforms are meant to address the inability of Albanian politics to address the needs of the population, as well as break the link between crime and politics.

Great parties are those that know how to understand and confront the challenges of their peoples. The Democratic Party will find the courage and foresight: we will change ourselves today, so that tomorrow we can change Albania. We have to do today that which we did 26 years ago: to be the party for possibilities for all.

The Democratic has to and will be a party of the freedom of thinking, possibilities for everyone, and common values.

We will offer the Albanians a new political and social model, in which governmental power will be limited and the citizen will be empowered. In which deputies will be elected through the decision making process of the party members and the voters, so that tomorrow they will be in the first place representatives of the citizens and not of the party.

We will create the possibilities for competition and alternatives within the party. We will shorten the length of the mandate of the party leader and directors to two years. In this way, anyone who has a different vision or alternative, will have the possibility to compete to his or her vision become the vision of the party.

The important decision will be entrusted to the member, thus linking the political fate and career of anyone with the members and not with the leader. Not only the leader and high officials will be chosen by the votes of the entire membership, but also all candidates that compete for public functions, including mayors and deputies, will be elected through a one-member-one-vote system.

We will work that in the next elections the selection of the candidates in several electoral zones will be made through the members’ vote.

Let everyone know: the political representation of the PD will be determined by its members.

Finally, Basha turned to the necessity for openness of the Democratic Party:

I feel that today there is dispair and distrust everywhere. What I ask from all you citizens, not only democrats but everyone, is to not blindly trust my promises, but to become part of this change by contributing your participation, your inclusion, your ideas, and your public actions.

An open and free Democratic Party is a public good for all Albanians. If also other parties open up and reject internal autocracy that would be a great achievement for Albania.

I was 17 years old when the Democratic Party was born. Today I am is leader. I am aware that I have arrived at the point because the Democratic Party at a certain moment understood the importance of opening up to people and the values they bring. If there is anything that I not only believe but also am the living proof of is that openness brings fruit, freedom brings possibility.

Now it is my turn not only to contribute to opening up the Democratic Party but to guarantee that it will always be open and always free: a party where all that want to contribute to the politics and government of the country will always find a possibility and where their fate and career will only depend on ability, talent, and their contribution.