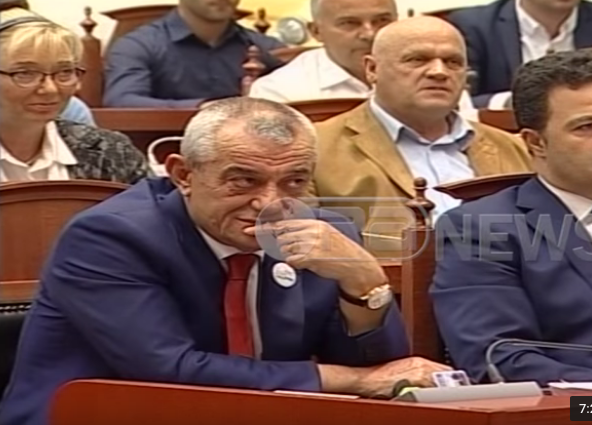 That Albanian politics is undergoing a full-blown regression to the politics of the past is something I have claimed ever since Edi Rama’s electoral victory.

This started with his initiative for “co-governance with the common people,” which led to massive lay-offs in the upper bureaucratic regions of healthcare and administration in the country, lay-offs that were dictated by the Prime Minister himself. Corrupt bureaucrats and judges would no longer understand the “worries” of the common people, and the only person who could bring politics back to the common man in the street was the great leader himself.

Rama even opened applications – avoiding any type of legal process or scrutiny – for his special “Co-governance Office.” Even though the application deadline for this extra-legal office, which would interface between the common people and the great leader, has passed since a few weeks ago, nothing has been heard from this initiative since. I am sure it will be launched at a politically opportune moment.

In a recent bout of megalomaniac hysteria, the Prime Minister even proclaimed a doctrine of “one party, one force,” claiming the indivisibility of government, Socialist Party, and parliamentary majority.

We only need to go back a couple of decades into the past to find a political configuration with the same features: ideological emphasis on the “common people” (then called “proletariat”), information sessions with common people around the country (then called “knee to knee with the people”), and of course the one-party state.

Little could prepare me, however, for the spectacle arranged by former communist Minister of Interior Affairs and current Speaker of Parliament Gramoz Ruçi, who staged a full-fledged pageant in Parliament, not seen since the Party of Labor congresses of yore. The invited speaker was Rigerta Loku. More than a year ago, Reporter.al made a profile of Loku, a graduate in politics and international relations from the Sapienza university in Rome who, after failing to secure a government job, opened a farm in Rubik, Mirdita. In the interview, she stated:

Those elected by the party know very well that I and Nardi [her husband] weren’t militants and wouldn’t vote for them.

The article further highlighted that the couple “now lives far away from politics.” It is painfully ironic that this well-educated woman was now chosen to perform a piece of propaganda meant to bring tears to the eyes of even the most hardened former communists present in the “First Rural Parliament of Albania.”

The speech itself was basically unbearable to watch in all its bathos. Loku’s voice, broken by emotion from her very first words, stretched out her pauses as if imitating the speech of Edi Rama himself, the content – it continues to be debated whether she actually wrote the speech herself – a strong echo of the leader’s words: listening to the common people (in order to mask the blatant misrule of the government):

I feel upon my heart and shoulders the weight of this pulpit falling down on my spine. [sniffles] But I will go back to my province. And the weight will fall on these honored deputies.

It is a question whether the deputies that Loku addressed actually ever felt the weight of that pulpit, which is used by majority and opposition alike to spit out the foulest words and the most dreadful nonsense, but she was able to use several key phrases to signal that she was now clearly on the side of the PS: “Albanian Europe” (the PS electoral alliance was called “The Alliance for an Albanian Europe”), “rebirth” (again a keyword in PS political discourse), and “Albanian will be made.” In the first minutes Loku made clear that she was no longer “far away from politics,” but rather at the center of it.

Sometimes, Loku sounded more like a saint spreading a sacred message, for example in her drawn-out sentence “In the village survives also the miraculous essence of the difficult life,” and her praise of “those villages, where poverty and miracle live in the most fantastic way possible.” Sacred maybe, but fetishistic and perverse certainly. At other times she raffled off her speech at high speech, switching between exalted phrases and bureaucratic jargon.

Loku’s consistent emphasis on “the village” slowly turned into a mantra, in which it seemed that all that was good came from the rural hinterlands of Albania, while the elite bureaucrats resided in the city – in other words, a variation of the theme “co-governance with the common people.”

Without a developed village there are no developed cities. If you don’t develop us, you’ll never develop. Development comes in Albania from the periphery. There, from my Mirdita your Tirana is developed. And not from your Tirana my Mirdita. […]

Come and see it! Come to the village! […] But I beg you, don’t come with a small car but with a 4×4. Because villages […] don’t have roads, the car cannot go there. The car cannot go there. And where the car cannot go, nothing can, not even life. Villages don’t have roads, roads as the arteries of blood that nourish and give life. Give the villages water and roads and you have given them development. We don’t ask anything else: water and roads. […] Kristina [a woman in Loku’s village] has her dignity; she doesn’t ask anything from the state except water and roads. […] Water, roads, schools, and efficient healthcare.

The “common people” in the village, therefore, demand nothing of the state, because they have their “dignity.” They ask for water and roads – for more construction work. They do not ask for electricity, pensions, for equal opportunities, for employment, for social insurance, or for proper administration. They don’t care about the destruction of the environment, organized crime, or the pollution of the waters, about corruption or about maladministration. The “common people,” the “villagers” – unlike those ungrateful people from the city – ask only for water and roads, efficient healthcare, and a school. How convenient, because all of these can be delivered easily through a public–private partnership!

The end of Loku’s speech savored the workmanlike attitude of the village touted so often by city boy par excellence Erion Veliaj: work, not words.

This country needs workers, that have few words and a lot of work. Strong and optimistic. […]

The village has no politics, no party, no majority or opposition. We in the village work with the right hand, our heart beats left, our brain is in the middle, and if we want to do well what we want to do, and if this Parliament wants to do the good which it has been elected to do, all these organs needs to fulfill the function that pertains to them.

Our concern with Rigerta Loku’s speech should be much less with its content, which was bland and predictable, than with its form. Loku’s speech showed the vitality of that old, tried form of political rhetoric: the simple farmer speaking truth to politics, the wise villager putting the politician in his spot. The villager that doesn’t ask much, namely exactly as much as the leader is generous enough to provide. The sensitive villager that cries, but doesn’t criticize. The apolitical villager, that is actually the most political of them all.