Recently, Exit has covered the different ways in which the rule of law and essential structures of the democratic state have been undermined since the installation of the new Rama government, from the “co-governance with the common people” program and the establishment of the extra-legal “Co-Governance Office,” which Rama has planned to announce coming Friday, to his declaration of a one-party state and the return of emotional (and politically useful) villagers as cynical entertainment in parliamentary sessions.

This situation has not gone unnoticed outside even in foreign media, where journalists are already speculating about Rama as the “new Enver Hoxha.”

It is only natural that Rama’s leadership style, which basically consists of pitting a top party nomenklatura and oligarchy together with the “common people” against a class of bourgeois bureaucrats, cosmopolitans, and small business owners who have “lost touch” with the “real Albania,” trickles down the government hierarchy. As a result, legally regulated procedures are thwarted in favor of a “personal” approach, which concentrates power in the hand a few officials, rather than keeping the balance of power and bureaucratic procedures that are meant to avoid these types of power monopolies in place. 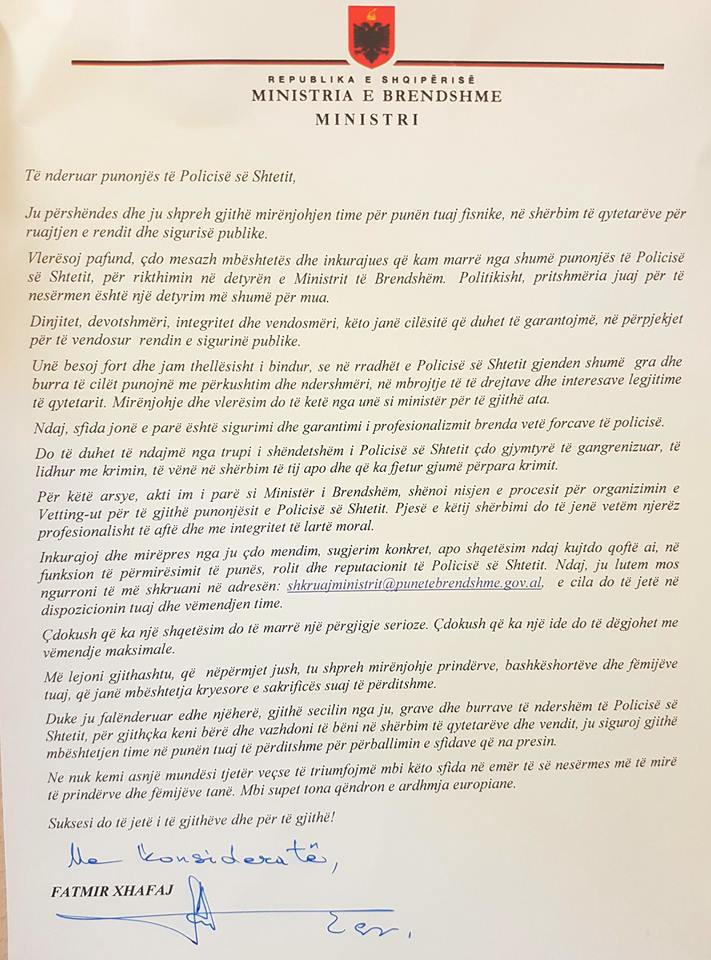 A clear example of this dangerous development is a recent letter from former communist investigator and Minister of Interior Affairs Fatmir Xhafaj to all police forces, in which he announces a “vetting” of the police and to write him about any of their “worries”:

Our first challenge is the safeguarding and guaranteeing of professionalism within the polices forces.

For this reason, my first act as Minister of Interior, is the start of a process for the organization of the vetting of all employees of the State Police. Part of this service will be only people that are professionally capable and with a high moral integrity.

I encourage and welcome from you each thought, concrete suggestion, or worry about anyone no matter who, for the improvement of the work, role, and reputation of the State Police. So please do not hesitate to write me on the address [email protected]

It is ironic that a minister who has never apologized for his role within the communist justice system or has distanced himself from his brother, who internationally wanted as a major drug trafficker, would speak about “high moral integrity.” But the fact that he is announcing a vetting procedure and opened his personal email address for complaints or worries about “anyone no matter who,” severely undercuts the legal framework for complaints procedures in the police forces.

For within the Ministry of Interior Affairs there is the General Directorate of the Service for Internal Issues and Complaints, whose legally established role it is to process complaints against the State Police. Employees from the Directorate of Inspection and Complaints, which falls under it, were even trained and certified by the International Criminal Investigative Training and Assistance Program (ICITAP) of the US Department of Justice.

Law no. 70/2014 on the Service for Internal Issues and Complaints in the Ministry of Interior Affairs, approved during the previous Rama government, is also very clear about which institution is in charge of safeguarding the “moral integrity” of the State Police:

Not a single word about a personal email address of the Minister of Interior. Instead this is the right email address for complaints about the State Police:  [email protected].

So rather than making the State Police attentive to the legally established institution that handles complaints within and against the police, which has been trained and certified by a US state institution, Minister Xhafaj encourages the police forces to ignore the law passed and to write to him “personally.”

This is not the first time this happens. For example, former Minister of Interior Affairs Saimir Tahiri put up posters at the passport control in Rinas Airport with his personal cell number, asking citizens to call him with complaints.

However, this type of behavior in which legal structures are undermined and years of capacity building (more than often financed by foreign allies) are annihilated through a simple letter from the boss is illustrative for the leadership style promoted in Rama’s new cabinet: the concentration of power in the hands of few rather than the many and personal loyalty to the leader rather than respect for the rule of law.