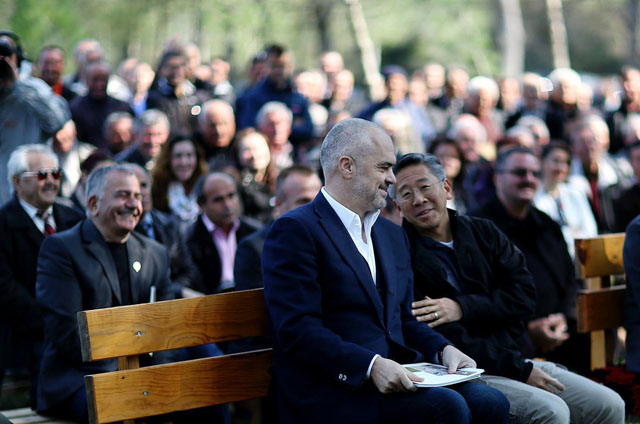 In a last minute press conference with US Ambassador Donald Lu, Prime Minister Edi Rama announced today that his government will soon present a draft law to Parliament for a “reform of the truth.”

Prime Minister Rama introduced the ambitious plan to “clean out the dumpster of journalism” and “allow [Albania] to take [its] rightful place among the European nations, such as Poland, Hungary, and Turkey.”

What I can say very openly and directly […] is that the opening of [EU accession] negotiations no longer is an issue that depends on what we are doing better. […] The constitutional judicial reform passed, the negotiations were not opened. Then vetting was imposed. The vetting passed and of course the implementation of the vetting is awaited, but that depends on how you see it, because vetting has started.

The opening of negotiations does not depend on what we are doing better, we also have to say it better. That is why my government is proposing a reform of the truth, which will certainly bring us the desirable results that the dumpster of the media is now denying us. After the reform, ordinary citizens will finally have access to the truth that all those who follow my ERTV platform already know.

Together with the vetting, the truth reform will allow us to book immediate and decisive results in the 5 priorities set by the European Commission. Corruption, cannabization, organized crime, human rights violations will all cease to exist, and we will take our rightful place among the European nations, such as Poland, Hungary, and Turkey.

As part of the truth reform, all journalists and anyone with a social media account will be vetted by an independent qualification commission established by Parliament, consisting of senior media personalities, selected by two different parliamentary ad-hoc committees that will choose from a list prepared by the Information and Data Protection Commissioner. The vetting will be monitored by an International Monitoring Operation headed by Alastair Campbell, and the vetting procedure will be assisted from the Prime Ministry by Endri Fuga and the Directorate of Communications.

The truth reform will for once and for all remove rumors and false accusations from the comments on my Facebook wall until there is only truth, the whole truth, and nothing but the truth!

US Ambassador Lu expressed his support for the Prime Minister’s innovative reform program, stating that it is a commonsensical response to the “complexity” of the modern world.

We are living in a world so complex, that contradictions occur everywhere. The political situation in the United States is a perfect example. When the President says one thing, his Secretary of State says something else, then the media turn it into fake news. We have even implemented this in our own department.

Yesterday my direct boss at the State Department, Deputy Assistant Secretary for European and Eurasian Affairs Hoyt Brian Yee, said that “no one should be above the law,” implying that the Albanian Parliament should lift former Minister Tahiri’s immunity. He also said that the government should “set the example.” That’s why in my speech this morning I spoke about other politicians in the last 27 years who escaped justice, even though their immunity was lifted. That doesn’t make sense, but what matters is the truth.

Justice is just a word, and as long as you repeat it often enough in different contexts, it will start to lose its meaning by itself. Is Saimir Tahiri guilty or not? That’s not for me to say, but the people have the right to know the truth. The right to the truth is more important than any human right. It’s their foundation. That’s how the Albanian truth reform will work in practice, and considering the results I see back in Washington, I am convinced that it will be a success.

A new generation is growing up in Albania that rejects the obscurities of reason and law, those are things of the past. We have now entered an era, in which me eating stuffed eggplant is more true than anything I could say about the rule of law. That is why we need this truth reform, and that is why the United States of America fully support it.

After the end of the press conference, @EU_Albania tweeted: “Congrats @ediramaal for important initiative. Delegation did NOT acquire HoD residence from drug dealer.”

Note: This article is satirical, none of it is true.