An EU-funded study by researchers from the Institute of Democracy “Societas Civilis” in Skopje under the Horizon 2020 project “Closing the gap
between formal and informal institutions in the Balkans” (INFORM) has found that vote buying practices and related clientelist strategies to persuade voters are wide-spread in the Western Balkans and in particular Albania. 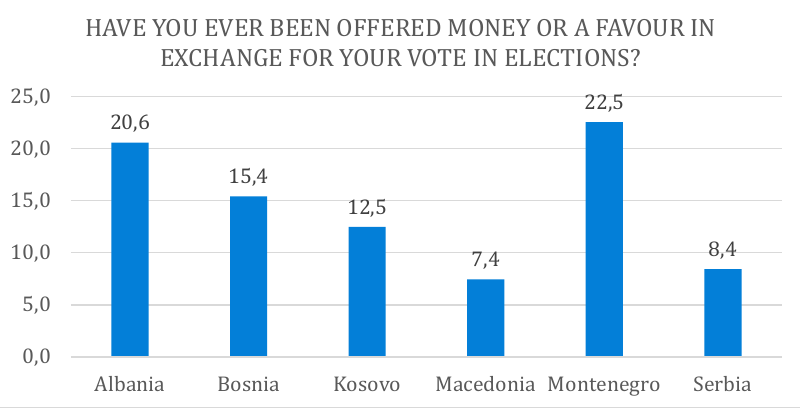 According to the report, this means that nearly 700,000 Albanian citizens have been confronted with pressures from political parties.

Furthermore, 5.6% of those interviewed indicated to have pressured into participating into party events, while 4.8% has been pressured to vote for a particular party.

Apart from confirming wide-spread rumors about vote buying and other clientelist practices by Edi Rama’s government during the last elections, the findings of the report also show that the tools and resources at the disposal of international monitoring missions such as OSCE-ODIHR are perhaps insufficient to uncover such practices.

Even though the OSCE notes in its final report on the campaign for the June parliamentary elections that “the campaign was characterized by widespread allegations of vote-buying, concerns over abuse of state resources and workplace-related pressures on voters, which further reduced public trust,” they found insufficient concrete evidence:

In the aftermath of the elections, both the [PD] and [LSI] reiterated their claims to the OSCE/ODIHR [Election Observation Mission] that a massive, wide-ranging vote-buying operation had taken place. Both pointed to some concrete cases, but, in the absence of sufficient conclusive evidence, did not present any legal challenges to the results. They nevertheless maintained their firm assertion that the extent of vote-buying was linked to large amounts of money available from criminal drug cultivation.

That being the case, the OSCE recommended the following:

Robust efforts are needed to address the persistent issue of vote-buying, both through a civic awareness campaign and prosecutions, in order to promote confidence in the electoral process. A concrete and genuine commitment from political parties to combat vote-buying practices could be made. In addition, a public refusal by politicians to accept financial support from individuals with a criminal past would help build public trust in the integrity of the elections.

As all parties across the political spectrum employ such strategies, and are based on similar clientelist networks, it remains a question whether Albanian politics will be able to successfully address this perennial issue, which in the end is not only the result of the influx of criminal money, but even more of the enormous ideological vacuum at the center of all parties. Without ideas to vote for, you might as well vote for the money.