Rama Is Right, The Palms Are Not the Problem 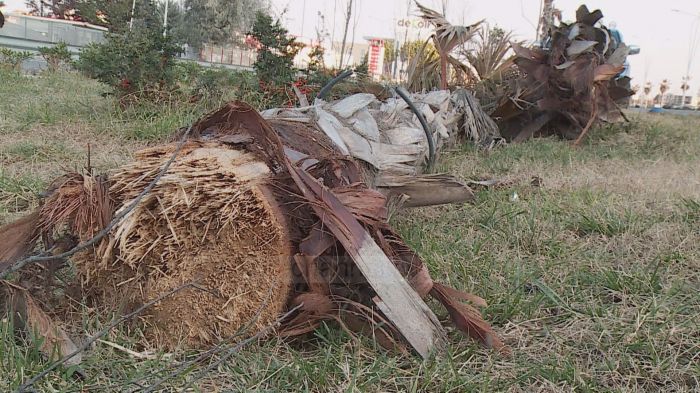 In Albania, maybe like everywhere else, polemics arise immediately after every tragedy or catastrophe.

Also this time, when after two days of heavy rainfall the country drowns in a torrent of mud and floods, there is no lack of political attacks, which, naturally, were directed at one of the symbols of this government, the palm trees planted on both sides of the highway from Laprakë to the exit toward the airport to decorate the entrance to city for those arriving by plane.

The palm trees were a suggestion of one of the many architects called to Tirana immediately after the 2013 general elections, before Rama became prime minister. A bus full with architectural and territorial planning “geniuses” roamed and explored the country in a few hours under the guidance of the future prime minister, giving his advice and suggestions. Under these circumstances, which happens also in seminars or conferences, you need to intervene, to attract attention, even if with something exaggerated, to become the preferred advisor and perhaps even to be given a task.

And that’s the answer to the question how to improve the entrance to Tirana was given by a brilliant north-European botanist, perhaps convinced that Albania was tropical, who thought that palm trees would do the trick. Of course, without asking whether such plants were actually resistant to the Albanian climate. But the idea was noisy, inflated, big, eye-catching, and that’s all that was needed to make it a government priority, despite the existing project to broaden the highway, despite the absence of a well-designed plan, despite the true priorities of the administration.

I need immediate signs of change, just like when I painted the façades as mayor of Tirana; this guarantees political success and support – our newly elected prime minister must have thought.

And that’s how the palm trees turned into a pilot project, an icon of the “Renaissance.” And an entire country filled with idiots started to plant palm trees everywhere. And after putting up this new canvas, the painter didn’t know where to stop, resulting in the colorful spherical halves along the sides of the highway, which were supposed to protect the palm trees but became a source of many accidents.

Of course the opposition attacked the palm trees, because they’re an icon. It attacked them when they died from frost (an extraordinary situation, the government said), just like it attacked them when the highway flooded after two days of rain (an extraordinary situation, the government says), and it attacks them when there are plans to replace them with pine trees, this time accompanied by an important investment for a modern water management installation that costs as much as a modern elementary school.

Today the discussion is about the fact that when the government planted the palm trees and placed the concrete spheres along the highway, it forgot to install a drainage system. As a result the main traffic artery of the country became impossible to use.

The government denies this, blaming illegal buildings deviating the water flow in the area that was flooded, in fact, for a second time.

We don’t know whether the illegal buildings that the government talks about have been built recently, or were built during the previous government, but we know that many illegal (and legal) buildings were destroyed by the Rama government for esthetical reasons, for example in the case of Lungomare in Vlora, in Himara, and many other places.

Maybe a government that would be more careful about what really matters, would have used public resources to destroy these “illegal buildings” that threaten the water management around the highway, instead of using them for experimental botanical propaganda projects.

So this time Rama is truly right: this time the palm trees are not to blame. It’s the fault of he who didn’t know how to direct the energy and public funds where they were needed. The palm trees are merely the proof of this failure.