Sometimes, however, we are given information that warrants further inquiry. Such was the case with an envelope recently delivered at the offices of Exit, containing 21 photocopied pages of a 34-page document, with the first 2 and final 11 missing. The photocopied pages contain no header, date, or stamp.

The pages contain a list with the data of 61 officials documents, including date, protocol number, and subject of every document, which in all cases refer to the involvement of police officers in the cultivation of cannabis or drug trafficking.

All the documents mentioned in the list pertain to the period between March 2016 and March 2017, with the 11 missing pages at the end supposedly covering the period after March 2017.

Even though the photocopied document gives no details regarding the institution that drafted it, it gives the name of the institution(s) that were informed: the Prosecution of Serious Crimes (PKR), the State Police Directorate (DPSh), and the Service for Internal Issues and Complaints of the Ministry of Interior (ShBÇA). Each item on the list furthermore mentions one or more names and personal details of the police officers allegedly involved in cannabis cultivation and drug trafficking, their police unit and their rank at the moment the list was drafted. In total, the photocopies contain 127 names.

Some of the police officers’ names are mentioned more than once, in relation to different drug affairs. They include the names of the police chiefs mentioned recently in relation to Habilaj–Tahiri affair, who are currently still at large: Sokol Bode, Jaeld Çela, and Gjergj Kohila are mentioned in several incidents starting from April 2016, while other police officers from the Vlora police appear to be implicated as well. 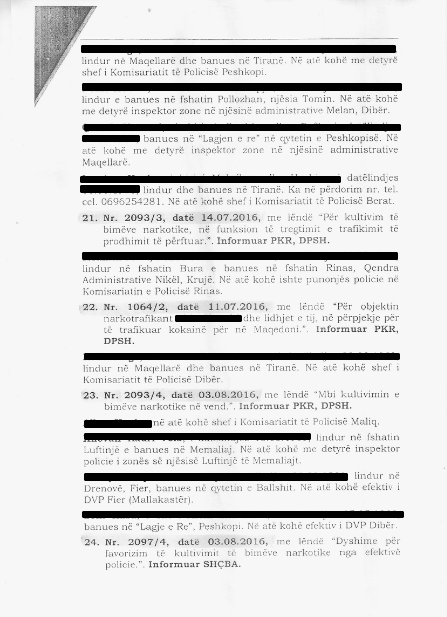 Conversations with several employees of the police and security services, who all requested anonymity to speak freely on the matter, reveal that the photocopies belonged to a summary of information gathered by the secret service ShISh during the period March 2016–March 2017 about the involvement of police officers in the cultivation or trafficking of cannabis. We should stress here that in all cases we are dealing with suspicions, not proof admitted in court.

According to the police and security employees we talked with, it is protocol that a copy of this document would be sent to the Council of Ministers, that is, the Prime Minister.

This means that at least since April 2016 Prime Minister Edi Rama received a stream of information from the ShISh showing the widespread involvement of the State Police in drug cultivation and trafficking.

However, Rama’s government took no measures during this period to address this issue. On the contrary, both the Prime Minister and the Minister of Interior Affairs, Saimir Tahiri, did everything possible to deny to continuing stream of allegations coming from the opposition.

This document, which we currently will not publish in full to avoid any unnecessary complications for those mentioned in it, is the smoking gun in the hands of Prime Minister Edi Rama in the Habilaj–Tahiri affair. Prime Minister Rama knew very well, at least since April 2016, from information provided to him by the ShISh, that the State Police was widely involved in the drug trade, while all that time he protected former Minister Tahiri without intervening once.

While Prime Minister Rama currently claims that Tahiri alone is responsible for his crimes, it was Rama who allowed him to go on.