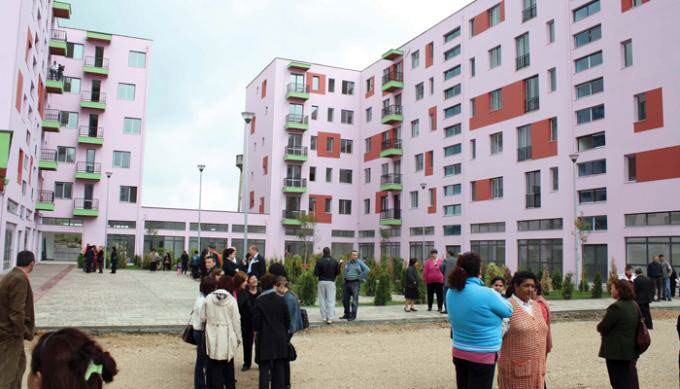 For these reasons, the newly elected Socialist government promised in 2013 to prioritize this problem. But so far it has produced only documents, one after another, for the most part mere repetitions, without improving the situation.

The budget dedicated to social housing has remained pretty much the same since 2012, even though the overall budget has increased. The municipalities themselves have accepted that the main problem is the lack of funds and investments from the central government.

Through VKM No. 466 from June 22, 2016 the Prime Minister Rama reduced  the help that the state budget gave to municipalities for rent subsidies with over 50%. The remaining 50% should be covered by the citizens themselves. In the same year, the Municipality of Tirana complained about the lack of funds for low-cost housing programs.

There have been two evaluating studies about housing needs by the former Ministry of Urban Development in cooperation with UNDP in 2014 and 2016, which provided the basis for the social housing strategy 2014–2025, as well as a new draft law prepared this year.

The first problem shown in these studies has been the lack of statistics at the local government units. When it came to power, the government propagated this lack as an indication of the low level of management of the previous state administration. But five years later those public statistics still don’t exist, neither in the municipalities, nor in the former Ministry of Urban Development or the former Ministry of Welfare, Labor, and Social Affairs, nor in the National Housing Entity, nor the Territorial Planning Agency, nor the new ministries of Infrastructure and Energy or Finance and Economy.

According to the ten-year strategy, an online platform has to be created to carry out the registration of social housing data within 2018, but even today the information continues to be hidden in the Excel and Word files of the municipalities. The latter still haven’t established working groups and the actual employees lack the expertise as well as proper understanding of the legislation. Paradoxically, in the same period that the online platform is planned to be finished, all municipalities are also expected to complete their action plans.

Inexplicably, another section of the strategy states that establishment and implementation of the electronic system in 61 Municipalities throughout the country is extended until 2021. And although this part is attributed to the former Ministry of Social Welfare, Labor, and Youth, in July 2017 the former Ministry of Urban Development declared that a team was working to create a national online platform for social services with focus on housing. Therefore, there is a clear lack of coherence between the indication of competences on paper and reality.

One of the consequences of these constraints and institutional overlaps, where it is unclear whose responsibility is what, has been that in a study done in 2016 under the title “Evaluation of the Needs for Housing,” the municipalities declared 5,663 beneficiaries of social housing, even though this number doesn’t correspond with the list of beneficiaries according to the program, which is 4,638, or according to the list order by category, which lists only 3,603 beneficiaries.

There is no reason to think that the mismatches worried the former Ministry of Social Welfare, Labor, and Youth, which was responsible for the distribution of the social housing apartments.

With the reorganization of the government and the dismantling of the old ministries, these and many other deficiencies will only worsen if a new draft law is not compiled soon that clearly defines the competences of the institutions concerning the housing programs.

The lack of statistics was was only taken as an illustrative example, but there are many more substantial problems waiting for a solution, such as:

Addressing these problems must start with the commitment to apply short- and medium-term strategies.

But confronting the strategic documents with the projects done to realize them, the question arises why the government invests in studies, strategies and draft laws, conferences and fictitious hearings, in human and financial resources when in fact doesn’t intent to apply them? When all the directives can be canceled with a simple VKM?

When it is known that our administration, both on central and local levels, operates on the basis of political and personal directives of the heads of these institutions and therefore remain vulnerable because of nepotistic connections and corruption?

When the implementation of such programs is divided over so many institutions?

When the lack of attention for the social groups in need is met with ignorance in draft budget discussions?

When it is claimed that a thorough reform of the entire social housing system is in place without any substantial increase of necessary funds, why do we need 10-year strategies?