The EU Condemns Violence, But Whose Violence? 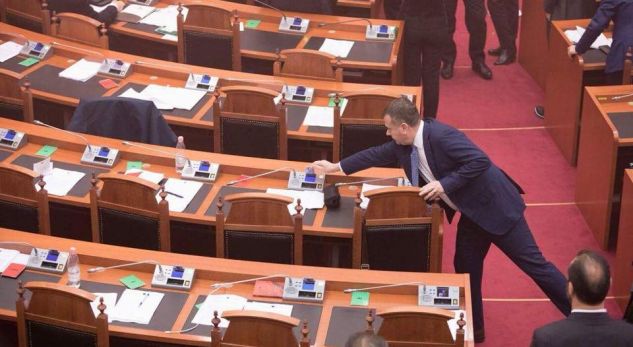 Today the EU Delegation in Tirana has condemned the “violence” during yesterday’s protests and the “conduct” of deputies during the parliamentary session in which Arta Marku was elected and sworn in as Temporary General Prosecutor:

The EU condemns the violence in yesterday’s protests and the conduct by the Members of the Parliament at the plenary session. Democratic processes, be it parliamentary hearings or protests, should be allowed to take place peacefully. Albanian citizens demand their elected representatives to show leadership and responsibility, and to work in partnership in pursuing important reforms that are also crucial for Albania’s aspiration to join the EU.

In the case of this EU statement it is not so much the pertinent inaccuracies that weaken its appeal, but the implication of a subjectivity that in reality doesn’t exist.

Let us take a look at the following sentence: “Democratic processes, be it parliamentary hearings or protests, should be allowed to take place peacefully.”

The question is who or what “allows” such a session or protest “to take place peacefully.” Shouldn’t that be the responsibility of the State Police or the Speaker of Parliament? Oh, but wait, the State Police has been fully delegitimated by its involvement in organized crime, and the Speaker of Parliament has ordered the murder of civilians when he was a minister in the communist regime and is involved in crime too! By phrasing the sentence in a passive construction, the EU avoids these uncomfortable realities.

Another of such passive constructions is “the conduct by the Members of the Parliament.” For what are we talking about? Are they addressing the blocking of the pulpit by opposition members or the socialist MP  Taulant Balla, who has been photographed using the voting cards of the opposition (see the photo above)?

But then finally, the greatest rhetorical trick of them all is the invocation of “Albanian citizens” just like Lu did yesterday. Who are these “Albanian citizens” who “demand” “leadership and responsibility”? I have not seen one such citizen express these sentiments, neither in the comments on Edi Rama’s Facebook page, nor on the protest signs outside Parliament.

Albanian citizens are either idolatrous of their great leader or demanding that the Constitution be respected, while a third group doesn’t care at all and tries to survive daily life. But to demand “leadership and responsibility” is something that none of them would imagine in their wildest dreams – it’s simply something beyond the horizon of the possible.

When the EU says “Albanian citizens,” it actually means itself. It is the EU Delegation in Tirana that wants “elected representatives to show leadership and responsibility” and “to work in partnership in pursuing important reforms.” But the EU Delegation in Tirana has realized that it has failed miserably to nourish the conditions for such leadership and responsibility, creating instead a legal chaos and juridical vacuum with a reform that is as unrealistic as it is endless.

Its ambassador, Romana Vlahutin, has realized that now that her term in office is coming to an end, the only thing she needs is a few judges and prosecutors failing the vetting process and maybe a corrupt opposition MP behind bars to declare victory.

And on that occasion she will tweet: “The Albanian citizens have won.”