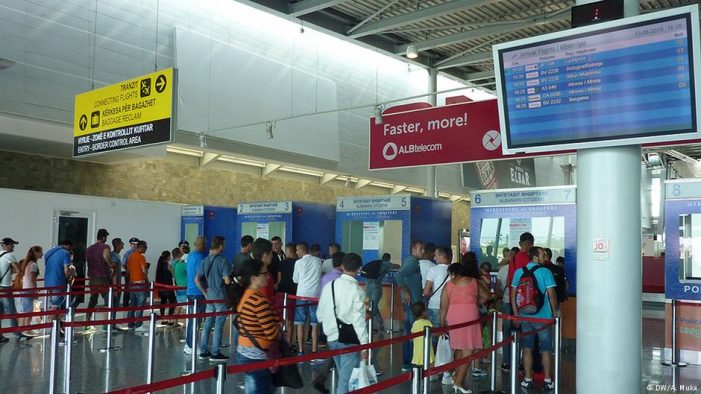 Only during the week of Christmas, the Italian media reported that at least 50 Albanians were arrested in different parts of Italy, mostly for drug trafficking, burglary, or petty theft, as well as domestic violence.

A fast analysis shows that also during the preceding weeks the rhythm has been the same, if not faster. The total of Albanians arrested in Italy during 2107 should therefore be around 2,500.

There are currently 2,600 Albanians residing in Italian jails, nearly as many as there are Romanians, and double the number of Moroccans. But Albanians are only imprisoned in Italy if they are residents and if they have committed repeated serious crimes. In all other cases they are expelled and sent back to Albania. This means that the number of imprisoned Albanians may represent a higher number of arrests than 50 per week. In fact, in 2016 around 5,800 Albanians were expelled from Italy.

What is interesting from the Italian reports is that the majority of the Albanians arrested in Italy resided there with a tourist visa or otherwise “irregularly,” with some of them expelled several times, and many others without previous criminal records.

In fact, this is the new “border” of Albanian emigration. The visa liberalization of the Schengen zone allows tourists to stay 90 days every 6 months, if you can provide a guarantee that shows the place where you are staying and that you have sufficient funds to provide for yourself, things that are easily taken care of with a credit card or a family member that already emigrated officially to Italy.

That’s why you can often read stories of Albanian drug dealers living in hotels for week, or others specialized in burglary living in the apartments of far relatives. Reading these reports, it is perhaps easier to understand the traveling motives of those well-dressed youths sporting expensive watches, whom you constantly encounter at the airport.

Fortunately, not all of them are criminals, even though they all violate the law alike – there are even some who have found a way to do seasonal work, especially during the tourist season.

A woman from Vlora tells how already for two years she switches with her granddaughter, both without working permit, taking care of an elderly lady in northern Italy, replacing each other every three months. Both receive a good salary, allowing them expenses and trips and a more quiet life in the periods they are in Albania.

To measure these phenomena more precisely, we would have to look at the statistics from TIMS, which are only available to the government. But according to the statistics published by INSTAT, the number of Albanians traveling outside the country has increased from 1 million in 2013 to 3.9 million in 2012 in 2013 and 4.8 million in 2016. This trend has even increased in the first part of 2017.

For sure most of these leave the country to meet their parents, but the consequences for those who really profit from this system can turn quickly sour when this leads to the reimposition of the Schengen visa.