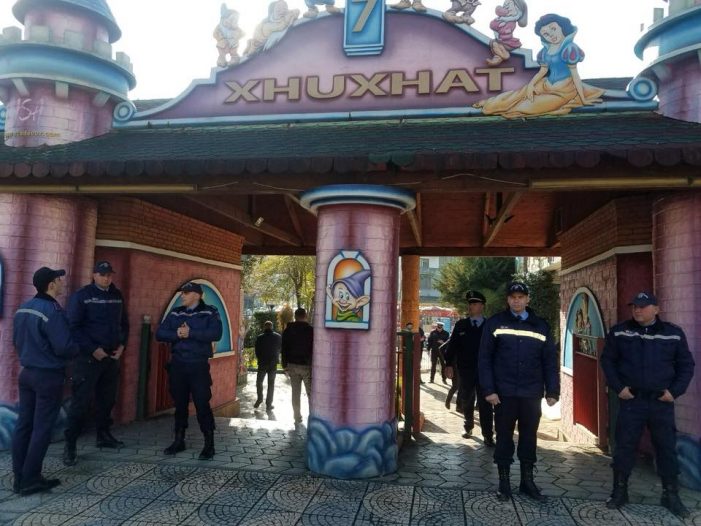 On Friday the demolition started of the largest children’s playground in Tirana, 7 Xhuxhat on the corner of the Lana and Rr. e Elbasanit. Dozens of policemen were present at the site, at which a new skyscraper, DownTown Albania, will be constructed. 7 Xhuxhat was opened in 2001 by then mayor of Tirana Edi Rama.

The project has been approved both in violation of the Aarhus Convention and the laws of Albania, with the Territorial Development Agency (AZhT) failing to publish the decision of the National Territorial Council, which consists mainly of ministers headed by Prime Minister Edi Rama.

In an attempt to counter the backlash against the project, the communication department of the Municipality of Tirana has produced several news items focusing on the new children’s park that will accompany the 134-meter tower, and the underground parking accompanying it.

The real-estate project, which will further add to the enormous surplus in office and commercial space in Tirana, is developed by three oligarchs close to Edi Rama. 35% of developing company DT1 shpk is owned by Samir Mane, 35% by Shefqet Kastrati, and 30% by Nikolin Jaka.

Considering the multiple legal violations in the planning and development of this project, it should be expected that the Prosecution Office would open criminal proceedings both against the municipality and the developers. Instead, the Municipality of Tirana has fully embraced this clientelist project.

Almost Half of UKs Sham Marriages Involved Albanian National
Why it is Time to Visit Albania!
Ukrainian Grain Reaches Albania