In 3 Years, EURALIUS Has Drafted Only 1 Legal Opinion for the Albanian Government 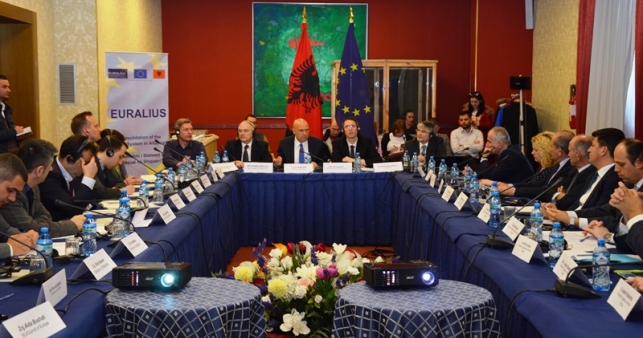 Much has been made recently about the EURALIUS/OPDAT legal opinion that has served as the excuse of the Rama government to elect a Temporary Prosecutor General in violation of the Constitution and Albanian laws. The influence of the two international justice missions, which at least in the case of EURALIUS is in fact a private company hired by the European Commission, is such that Prime Minister Edi Rama recently stated about a constitutional change proposed by the opposition:

Let them go get the support of the USA and EU and then let’s sit and discuss.

In other words, unelected and unaccountable private EU-hired lawyers now appear to be in charge of the legislative process in Albania, which is of course, and this should not have to be pointed out, in violation of the Constitution and severely undermines the sovereignty of the country.

This is an ironic situation, as the mission of the EURALIUS IV mission, which lasted from 2014 to December 2017, was “to strengthen the independence, transparency, efficiency, accountability and public trust in the Albanian justice system in line with the EU acquis and best practices.” As it now appears, in the more than 3 years of EU efforts, none of the above have visibly improved. Rather, it appears that the Albanian justice system has become subservient to a dependent, opaque, inefficient, and unaccountable foreign justice mission – EURALIUS IV.

Previously, Exit contacted the EURALIUS IV mission in Tirana with a request concerning precisely the type of work they do for the Albanian government, and the opinions they have given that have shaped the Albanian judicial reform. A spokesperson of the mission refused to give any information.

In letter dated January 16, 2018, the European Commission responded as follows:

[T]he Commission has identified one document in its possession corresponding to the description given in your application: the legal opinion on the temporary acting General Prosecutor of Albania.

In the 3 years that EURALIUS IV has operated in Albania, it has only once written a legal opinion for the Albanian government! And this single legal opinion just happens to be drafted mere weeks before the end of its mission: the controversial opinion justifying the unconstitutional election of a Temporary Prosecutor General, who is now already wreaking havoc in the Prosecution Office.

In all other cases, EURALIUS has followed its normal procedures by commenting on draft laws presented in Parliament, allowing the legislative branch to discuss its proposals openly and democratically.

But only in this particular, unique, single case (in more than 3 years!), a legal opinion was offered, through an extraordinary procedure, and without being published on the EURALIUS IV website. Moreover, this legal opinion, favorable to the government and therefore favorable to EU Ambassador Romana Vlahutin, was issued in the period when the consortium running EURALIUS IV was also taking part in a public EU tender for its successor mission EURALIUS V.

One last thing. As can be easily verified, the legal opinion on the Temporary Prosecutor General drafted by EURALIUS and the one sent to the Albanian Parliament on November 22, 2017 by OPDAT Resident Legal Advisor Jon Smibert are exactly the same. This means that the legal opinion was fully drafted by EURALIUS and signed off on by OPDAT. Prime Minister Rama has always spoken about a joint EU/US legal opinion, but from the documents provided by the European Commission it becomes clear that the input of the US was simply the letterhead. This in turn raises the troubling question as to why EURALIUS didn’t send its legal opinion directly to Parliament and publish it on its website, following the standard transparency procedures. And why did OPDAT present the EURALIUS opinion to Parliament as its own?

Unfortunately, no answers to that question will be forthcoming any time soon, as the European Commission told us that

But the answer from EURALIUS IV we already know: it is “a technical assistance project and has no public relation activity.” And this is how the European Commission and its private contractor protect each other, hiding crucial information about an utterly untransparent “quasi-legislative” process.