The US Embassy Has No Competence to Give Any Legal Opinion

The closer the end of Donald Lu’s term as US Ambassador in Tirana, the more openly he seems to become as a surrogate for the Rama government.

Without any clear reason or necessity, the US Embassy posted the following statement on its Facebook page this morning: 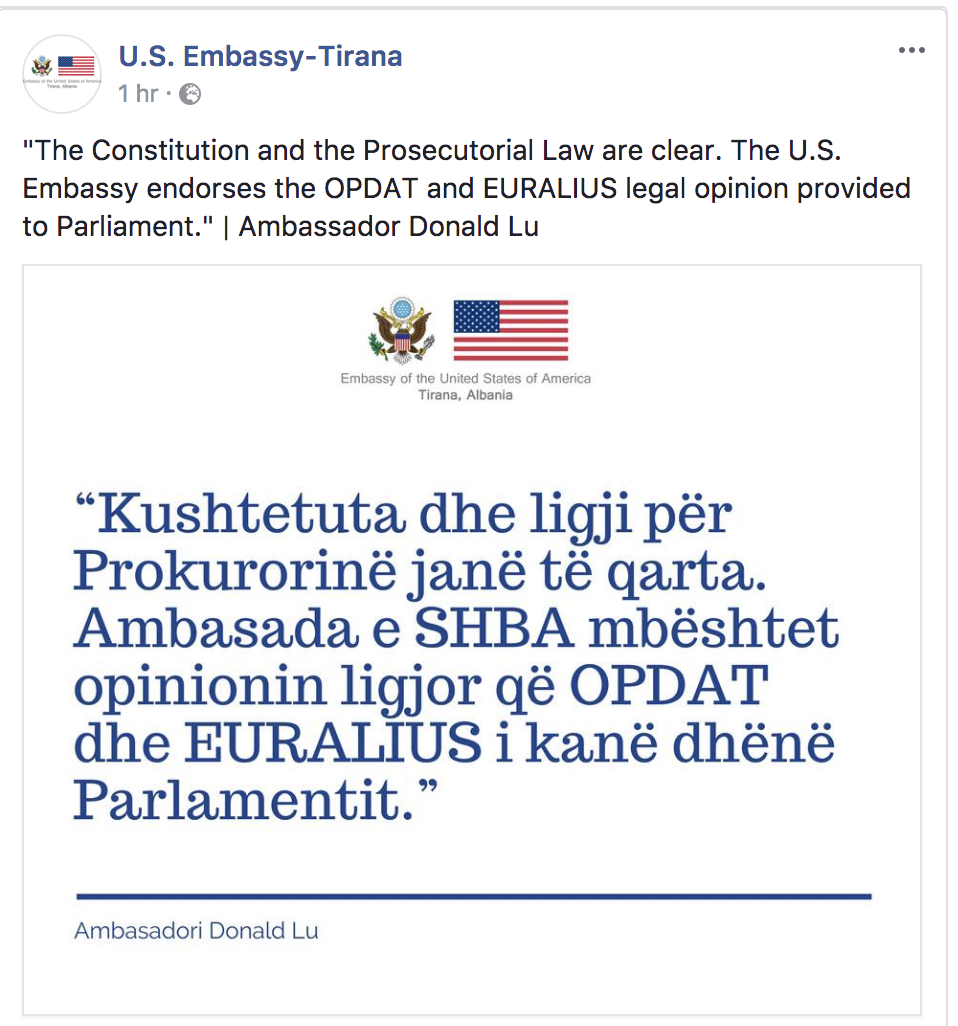 The Prime Minister of course immediately jumped on the occasion, posting:

The Albanian–Albanian translation of the US once again refutes the Albanian–PD reading of the Constitution about justice. Very sorry and little hope for reflection.

But the US Embassy’s statement of course says absolutely nothing, as it contains no argument, just empty rhetoric. A lot of emotion, but little reason.

Let us therefore, yet again clarify to the ambassador and his classroom of lawyers what the Constitution and the Prosecutorial Law (no. 97/2016) say, which can be verified by anyone who can read:

All these four articles of the Constitution and the Prosecutorial law were violated during the election of Arta Marku as Prosecutor General.

Then, as soon as she was unlawfully appointed, she violated a bunch of other laws, including the Law no. 96/2016 On the Status of Judges and Prosecutors in the Republic of Albania:

So indeed, US Ambassador Lu, the “Constitution and the Prosecutorial Law are very clear”! Both the election of the Arta Marku as Temporary Prosecutor General and her actions in office have been completely illegal.

Yet somehow, out of the disgusting arrogance that Lu seems to derive from his unelected position, he protects a legal opinion written by a private contractor over the judgment of the Constitutional Court.

Let us have a look at the qualifications one needs to be judge at the Constitutional Court: 15 year of legal experience, 10 years of not being involved in politics, a law degree. According to the Constitution, these judges have mandates of 9 years without the right to re-appointment, and it is their job – paid by Albanian citizens, not by the US or EU government – to adjudicate issues that pertain to the Constitution, such as a contentious election of a Prosecutor General in the midst of a legal and procedural vacuum.

Those anonymous legalists who drafted the OPDAT/EURALIUS legal document do not debate or argue for the merits of their opinion in public. They are not elected or appointed by a 3/5 parliamentary majority, nor are they actually qualified to write about any of these issues. If the ambassador is so sure of his case, let his lawyers defend their choice in public!

For the Albanian law, the opinion of OPDAT or EURALIUS is of precisely zero value. It can never be cited in court. It may never be used to justify a law. It will never be part of any single piece of jurisprudence. It is, by any legal standards, an irrelevant piece of paper used by the Rama government as giant fig leave to cover the shame that hides behind it: state capture.

Ambassador Lu’s mentality of “the end justifies the means” has nothing to do with democracy or the rule of law. And it leads nowhere else but corruption and autocracy.