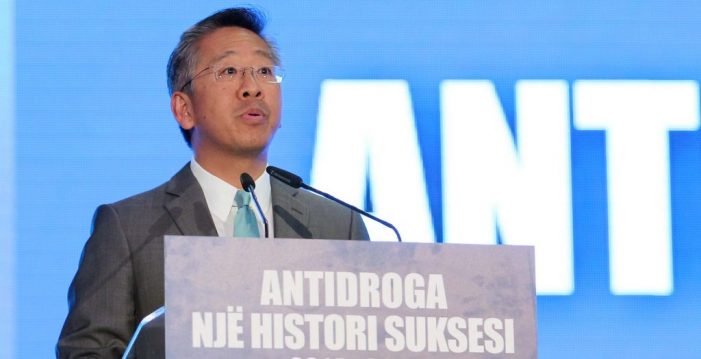 While the failure of the judicial reform is becoming increasingly obvious over time, the (frequent) public declarations of US Ambassador Donald Lu are becoming every day more stale.

In November, Lu “promised” that in January the Albanian public could expect the arrest of the “big fish” of politics. He made this declaration during an overblown propaganda event on public order, one of the many such events Prime Minister Rama has been organizing for the last four years, and which has consistently have featured the US Ambassador, offering his support, counsel, and orders.

At the event, the government presented a new police operation, “The Force of Law,” which would eradicate crime from Albania. Lu gave his blessing to this new initiative, and as a signal to Albanians to trust the government, he announced that two FBI agents would be stationed at the Ministry of Interior to help with the fight against organized crime and corruption. In other words, Albanians were supposed to believe Rama and Xhafaj because behind them was the FBI.

After several ridiculous and widely publicized actions—police captured only some unfortunate villagers with a few grams of weed—”The Force of the Law” was swiftly forgotten by everyone. It now, also. appears that the two FBI agents were more a propaganda stunt helping the government rather than the actual fight against crime and corruption. Furthermore, even though Lu had openly said that the two FBI agents would be stationed at the Ministry of Interior, one of the them, Jack Liao, is in fact a legal attache at the FBI office in the US Embassy in Sofia, Bulgaria, from where he coordinates the usual FBI relations with Bulgaria, Macedonia, Albania, and Kosovo.

In any case, January is slowly going away and Lu hasn’t got a single “big fish” to show to Albanians, and that’s why now he has retorted to “begging” on a daily basis the Albanian government to catch one. In an interview with Dita, Lu stated:

Where are the promised big fish? I ask this question to every government official I meet. The Albanians have seen some sort of progress, but not the big results they were expecting.

The statement seems a bit strange, because the “big fish” are supposed to be precisely the government leaders that Lu meets, and it seems incomprehensible why Lu thinks that the government will arrest itself.

The ambassador’s declaration is unfortunate, because he turns to the government for justice, while the judicial reform has precisely aimed to break the independence of the judiciary from the government. Lu should ask his question about “big fish” to the Special Prosecution (SPAK) and the National Investigation Bureau (BKH), which, according to the Constitution, should be installed precisely to catch those “big fish.”

But, in open violation of the constitution, both SPAK and BKH have not yet been set up, almost two years after the approval of the judicial reform, because their creation has been slowed down and obstructed by the Socialist majority. Curiously, the ambassador seems to be not worried at all about this situation, and fills this gap with ridiculous statements like those in his Dita interview.

It is equally incomprehensible why the ambassador doesn’t address the Temporary Prosecutor General about these “big fish.” After all, Lu should have great faith in her, because he supported her election by  Rama’s majority in open violation of the Constitution. (In fact, the ambassador has often shown that he believes more in “the means justify the ends” principle rather than principles of the rule of law and democracy.)

The ambassador’s interview is also permeated by a silence about other important issues concerning the judicial reform. Lu has never spoken about the fact that the Socialist majority openly rejected a few days ago the evaluation of the International Monitoring Operation (ONM), in whose board he sits, regarding the application of two out of three civil society candidates for the High Prosecutorial Council.

The ONM should have been an important guarantee for the vetting process, but so far, it has been used merely as a facade, and the ambassador’s seems unconcerned.

Even more disappointing is the fact the that US Ambassador has shown no worries about the attempt by the Socialist majority to shield their MP from criminal investigation. The recently proposed amendment to the parliament’s Rules of Procedures demand  that the Prosecution Office and SPAK shall provide full evidence to the parliament, which shall evaluate these evidence and decide whether to allow for the search or the arrest by the prosecutors of one of their own.

If this legal change is approved, which seems likely, the parliament will take over the function of the courts in determining whether deputies and ministers can be prosecuted, thus severely undermining the rule of law.

The only two people he has directly criticized for more than a year are the opposition leader Lulzim Basha and former Prosecutor General Adriatik Llalla. But he hides himself behind metaphorical generalities when talking about the responsibilities of Prime Minister Rama, former Minister of Interior Saimir Tahiri, Minister of Interior Fatmir Xhafaj, Speaker of Parliament Gramoz Ruçi, or other Socialist Party leaders. On the contrary, he has never failed to appear by their side, welcoming their imaginary “accomplishments.”