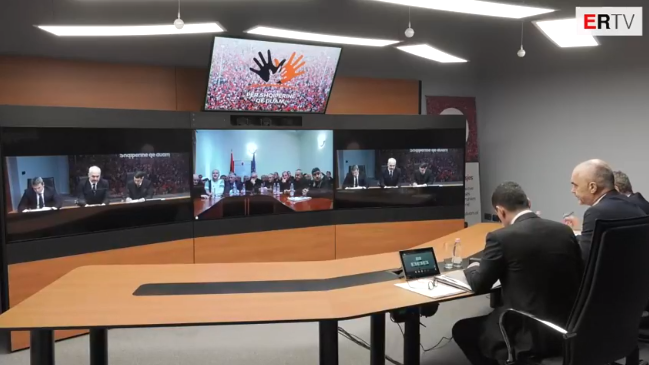 In a video conference between Prime Minister Edi Rama, Minister of Energy and Infrastructure Damian Gjiknuri, Minister of Economy and Finance Arben Ahmetaj, and the oil workers from the ARMO refinery in Ballsh, which have demanded their unpaid wages and a solution for the bankrupted refinery, the Prime Minister has once again blamed his predecessor, former Prime Minister Sali Berisha.

According to the declarations of the Prime Minister and the minister about the absent investments and debts of IRTC, the company of Besnik Sulaj and Harry Sargeant III that took over the refinery in 2016, all problems of the ARMO refinery started with he “criminal” privatization by the Berisha government, which sold ARMO to businessman Rezart Taçi.

He further explained that ARMO, as a result of the privatization in 2008, is currently owned by the banks and not the government. However, he declared that the government was committed to find another serious investor to restart the work in the refinery.

The Prime Minister didn’t pay any attention to the requests of the refinery workers regarding the salaries and the broken promises of Sulaj and Sargeant, but only spoke about Taçi criminal activities before he went bankrupt and Credins Bank took over ARMO, which agreed to rent out the refinery to IRTC.

According to Rama, the refinery is not working because it was made to refine locally produced oil, which however is no longer provided by Bankers Petroleum as IRTC didn’t have money to pay for it. Rama further tried to assure the refinery workers that they could have faith in the justice system, now that a new Prosecutor General has been appointed.

Ministers Ahmetaj and Gjiknuri invited the refinery workers of the ARMO factory to complete the dossiers for their official oil worker status, promising the appointment of a special unit to help them.

Finally, the Prime Minister invited the workers to send their future requests to his co-governance platform “For the Albanian We Love” instead of protesting in public. This would allow to get another video conference without having to walk to Tirana.

The Prime Minister’s message was clear: The government has nothing to do with ARMO except searching for a new investor. Stop protesting, and if you really have complaint, send a message to the co-governance platform.

After the video conference, which offered no solution for the dramatic financial and social situation of the refinery workers, to gathered in front of the prefecture in Fier and announced their protests would continue. They posed the following questions to which they had received no answer from the government:

Does the government know about concrete investments in the Ballsh refinery? According to the agreement [with IRTC] $220 million should have been invested in the factory. Why didn’t that happen?

What has happened to the 15% state ownership of AMRO and what role does this still play?

What are the actual debts of ARMO and how will these debts be dealt with?

Can we have healthcare centers in BAllsh or Fier?

Does the Prime Minister remember his election promise that the Ballsh worker would receive their unpaid salaries?