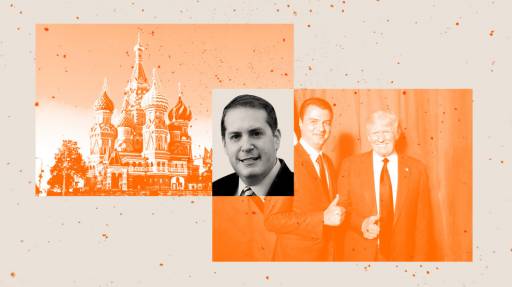 Seeing that many readers ask us to explain the “Russian Connection” launched by US investigative magazine Mother Jones, and immediately reproduced by part of the Albanian press corps, and that until now we haven’t written anything, we are providing hereby a detailed reading of what has been published and what we have managed to glean from it.

In a very brief summary, according to the story published by Mother Jones, PD leader Lulzim Basha, using an offshore company (supposedly controlled by Russians), paid an American lobbyist friend of US President Donald Trump’s to procure a picture of Basha and Trump together, a few days before the Albanian election. The hypothesis, sold as truth, goes: the Russians would have, in this way, destabilized the Balkans, seeing as a picture of Basha with Trump would have given the former an advantage in the election, and his impending victory would have blocked the judicial reform, thus, inevitably, chilling Albania’s relations to the EU, and, ultimately, destabilizing the entire region.

The article is merely a flood of irrelevant information with little to no relation to each other artfully woven into the story. They seem to represent the “logical” garnishes of a fishy article, skillfully designed to leave a bad taste in readers’ mouths, but, nonetheless, built around a single, entirely unprovable detail that serves as the foundation for a deeply illogical theory.

– That Basha had a picture taken with Trump, during an encounter of a few minutes, a few days before the Albanian elections, is well-known to be true.

– That Basha paid a lobbyist for this service is known, confirmed, and legal.

– That a picture with Trump would be able to flip the Albanian electoral results is a political idiocy, that is, moreover, believed and practiced by every political party in the country, first of all by Basha himself.

– That the same lobbyist received money from a Scottish offshore company to protect unspecified Albanian interests is also true.

– That Russian Secret Services attempted to destabilize Albania and the Balkans in general is possible but not necessarily true.

– That claiming a Basha victory would mean Albania’s destabilization is a logical fallacy.

– That President Trump served an anti-American machination is merely an implication of the unprovable (US) Democrat conspiracy theory that Trump is America’s real enemy.

– That a possible Basha victory possibly would cause a slowdown of EU negotiations is merely an implication of that other unprovable (Albanian) Socialist conspiracy theory that the Democratic Party is Albania’s real enemy.

In any case, for this pseudo-logical theory to function minimally, a key element is missing, namely that is the Scottish offshore company is really controlled by Russian agents. This is what the American site’s article not only never says, or proves, but instead merely alludes to the distraught reader who misses the large logical leaps.

The American article merely demonstrates that the Scottish offshore subsidiary was made up by two other companies incorporated in Belize, that were regularly used by a corporate consultancy system to generate many other “P.O. Box companies,” inactive companies that usually can be bought already registered for a few hundred pounds.

These companies, registered by dozens at a time, actually have legal addresses and share their managers with many other companies. For their sellers’ convenience, their administrators or directors (depending on the local legislation) may be other legal entities (something that is not allowed in Albania). Whoever then buys them, can change the administrator, nominating instead someone they trust, or they can keep the original ones and instruct them accordingly.

In the case of the two parent companies in Belize, they are managed by two different English companies that, at the same time, manage many more other subsidiaries. Some of these subsidiaries list among their beneficiaries Russian citizens, among which American journalists must have spotted some retired former KGB member.

This is all that has been written or demonstrated by the American so-called investigative journalists: no control, no certain influence.

All the rest is merely slander and delegitimization, intriguing tales aimed at deceiving the reader, but with no logical connection to the picture and even less to eventual destabilization and enemy alliances.

What would you say if you were arrested for prostitution because you slept in a hotel constructed by the same company that constructed a building where a woman rumored to be promiscuous lives?

For the justice of Enver Hoxha, perhaps, this would make for sufficient proof to sentence a dissident, while for the legitimate heirs and moral descendants of that time, today Socialist militants against Basha, and, above all against logic, this proof is only the desperate attempt to distract the Albanian and global public opinion from the drugs passing through their territories and their (offshore, naturally) bank accounts.