In a Desperate Situation, Moral Panic Is an Easy Sell 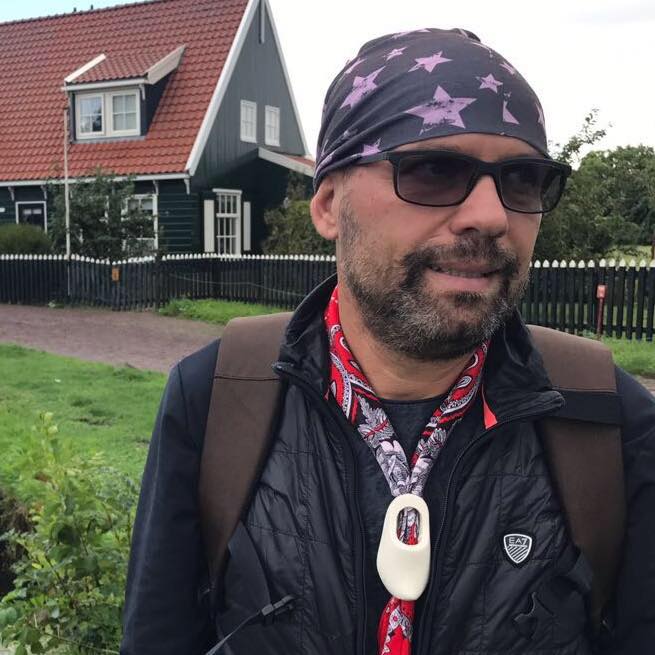 I noticed something was wrong when looking at my Facebook feed yesterday, when suddenly a number of homophobic posts started popping up in Albanian. The first one that caught my eye was by former Minister of Justice Ylli Manjani. 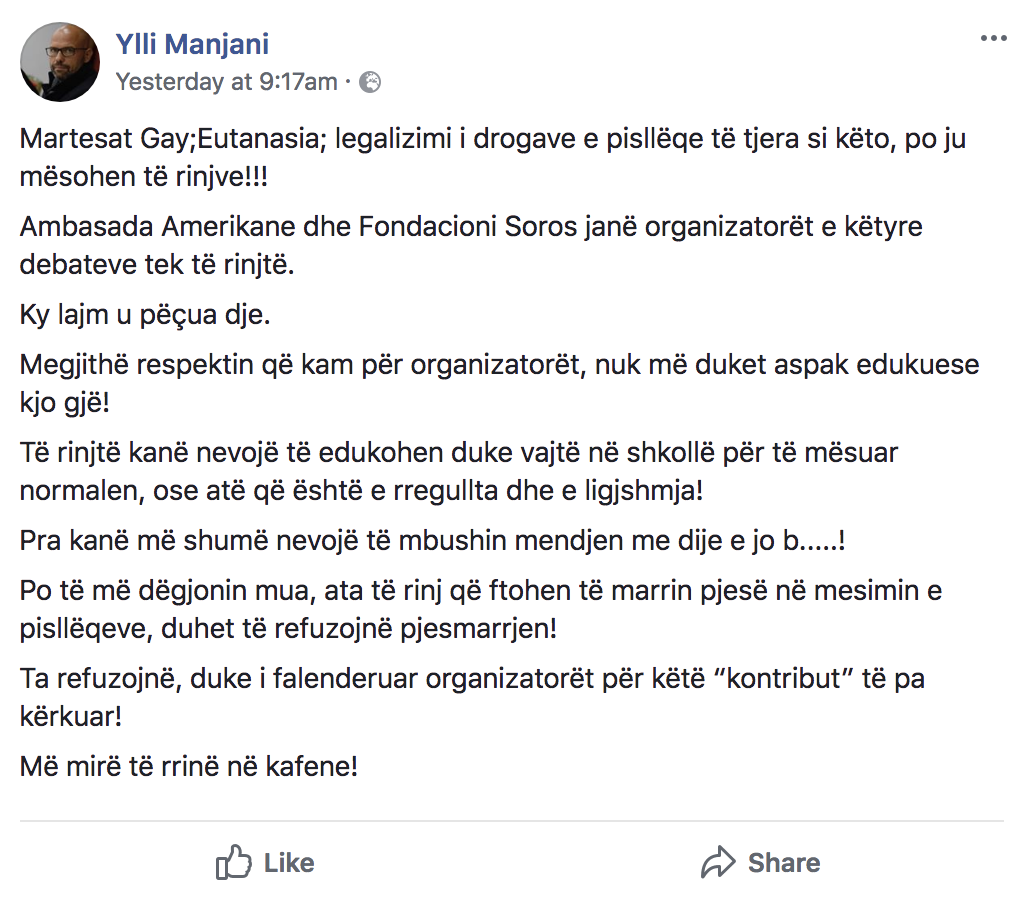 Gay marriage, euthanasia, legalizing drugs and other shit like that are taught to young people!!!

The US Embassy and the Soros Foundation are the organizers of these debates with young people.

This news was transmitted yesterday.

We all respect that I have for the organizers, this thing doesn’t seem to be educational at all!

Young people need to be educated going to school to learn what is normal, or that which is regular and legal!

So they have more need to fill their minds with knowledge and not their ass!

If they listened to me, those young people that are invited to participate in the teaching of shit, have to refuse to participate!

Let the refuse it, by thanking the organizers for this unrequested “contribution”!

Better to stay in the bar!

It is difficult to imagine that this is a former Minister of Justice speaking, someone who should have been familiar with all the international conventions signed by the Republic of Albania, including the European Convention for Human Rights. Manjani should have been aware of all the verdicts of the European Court of Human Rights in Strasbourg, binding also to the Albanian state.

What Manjani appears to be referring to in his Facebook post, are the activities – truly meaningful, transformative, and life-saving activities – undertaken by the LGBT community educators in Albania, traveling throughout the country and talking with students about questions of gender, sexuality, family, mental health, and bullying. These educators do so in a school environment where no education on gender and sexuality (of any type) is available, and where suicide among LGBT high school students is still a regular occurrence. They do so in a country where well-funded mental healthcare for children is absent, while domestic violence, often caused by widespread poverty and despair, is omnipresent. To help children understand themselves and each other, and to help them explore their own spectrum of emotions, is a service to the Albanian community that cannot easily be repaid and that gives hope for some future that is not entirely dreadful.

The Albanian government has received millions of euros from the Council of Europe and EU embassies to develop action plan after action plan to improve LGBT rights in Albania. Instead, Prime Minister Edi Rama has shut down the Ministry of Social Welfare and Youth, responsible for their implementation. In response to media outlets panicking about the “LGBT indoctrination campaign” and “gay agenda” in high schools, the Ministry of Education even denies that they know about LGBT educators traveling around the country offering workshops to schools. This is of course a lie. The Ministry of Education is part of a working group on the LGBT action plan, which includes educational and mental health components. These workshops have, in fact, been going on for years, out in the open.

So why now the outrage? Why does a former Minister of Justice need to talk about filling asses? Why do so many people who read my frequent writings on Albanian politics and culture support and distribute such opinions at this particular moment?

Albania is in a desperate state. Most of the state and the public wealth has been abusively privatized and has fallen into the hands of a small gang of oligarchs. The entire world considers Albania a narco-state, with report after report showing how the massive production of marijuana under Rama’s government has paved the road for the much more lucrative cocaine trafficking business, in which the brother of the current Minister of Interior is implied. A former Minister of Interior appears to have been in a criminal organization himself, with his cousins. The rule of law has been suspended, as the government has taken over the Prosecution Office, and the court system is paralyzed by a reassessment procedure without end.

And when in despair, it is always easiest to pick on the weak and defenseless. As if one child less bullied is a greater threat than a state captured by crime! As if one child understanding themselves is a greater moral decay than politicians plunging their fists deep into the common good! As if the idea that any child should be able to develop and explore themselves without fear or danger is more poisonous than a justice system redesigned to serve only one person!

This is the “as if” that the Albanian media are now acting out: a moral panic that distracts from what is really destroying Albania at its core, a way to cope with what we all feel powerless about.

PS: Ylli Manjani, that scarf with the wooden shoe is a Dutch souvenir – the country which has legalized gay marriage, euthanasia, and smoking pot. You may want to reconsider your fashion choices to match your “ideas.”