It may be clear by now that I have bitten myself into the issue of the “legal opinion” of EURALIUS, sent on November 13, 2017 to Parliamentary Legal Affairs Committee Chair Ulsi Manja. The legal opinion, which was the only legal opinion that EURALIUS has drafted during its entire mission from 2014 to 2017, provided Rama government with a much-needed argument to unconstitutionally elect a Temporary Prosecutor General, which since then has wreaked havoc at her institution.

The problem resides precisely in the legality of this opinion, and the question whether EURALIUS actually had a mandate to issue it. EU-funded legal assistance missions have clearly defined mandates, in part to avoid the EU from interfering in local politics in a way that is dubious.

The purpose of these Standard Operating Procedures (SOPs) is to explain the main policies and procedures of the Project [EURALIUS IV]. Policies are broadly stated principles and values intended to guide members in the performance of their duties in conformity with the Project objectives. Procedures may be general or specific in nature. Each member of staff shall be familiar with the Standard Operating Procedures and comply with them. […]

If a member encounters a situation that is not covered by these SOPs, the member shall be expected to exercise sound judgment and act in accordance with the core values and objectives of the Project.

Therefore, all staff members, and especially EURALIUS Team Leader Agnes Bernhard, who signed the letter accompanying the legal opinion on November 13, should have been familiar with the familiar with Chapter II of the SOPs, “Protocol and Relations with the State Institutions”: 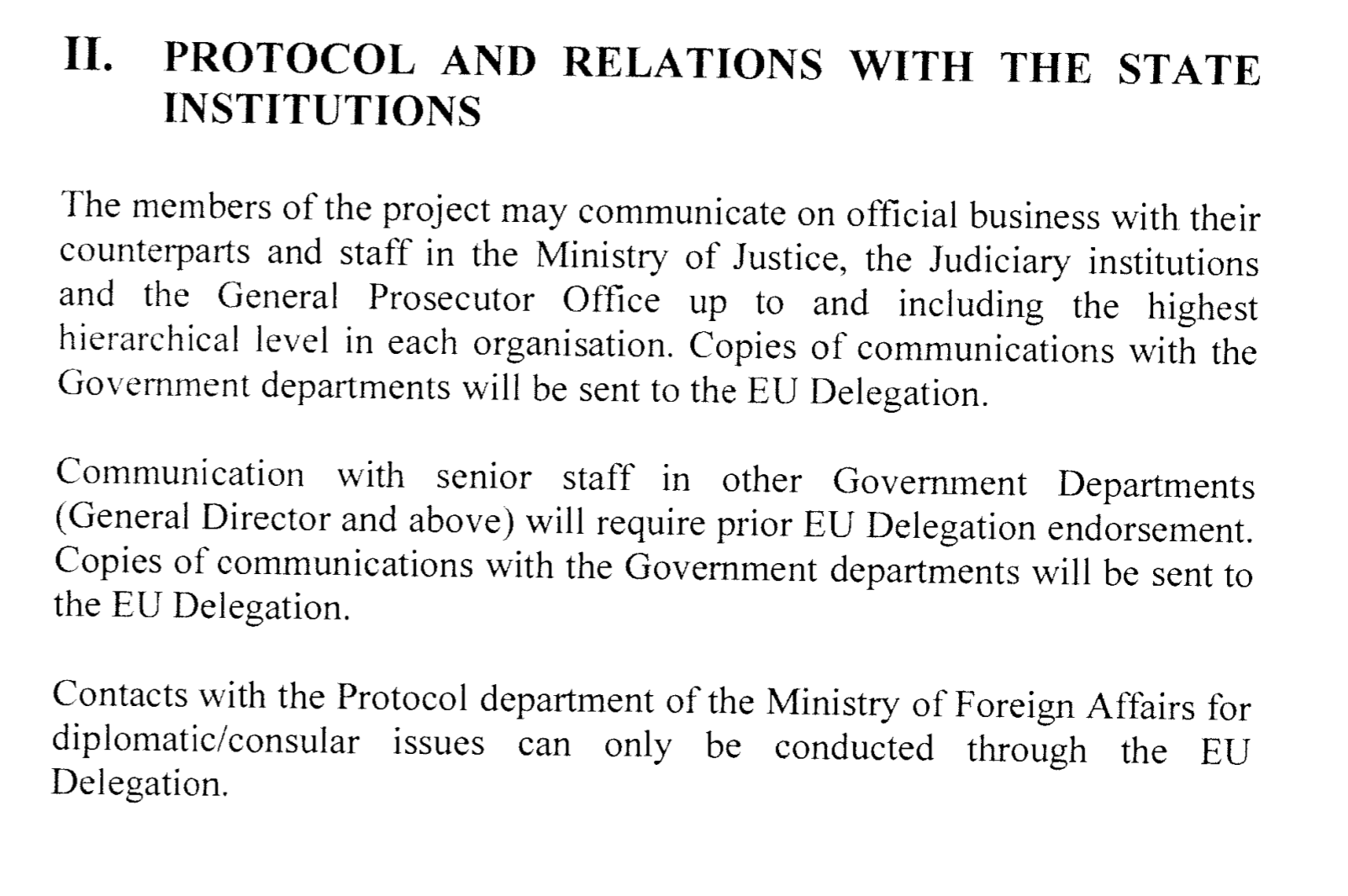 According to this SOP, EURALIUS members are free to communicate with the “Ministry of Justice, the Judiciary institutions and the General Prosecutor Office” without prior approval of the EU Delegation in Tirana. Communication with the government above the level of General Director requires EU Delegation endorsement, while diplomatic issues can only be conducted through the EU Delegation.

However, the legal opinion of November 13, which had a considerable impact on the rule of law in Albania and caused a Constitutional crisis, was not addressed to the Ministry of Justice or any government department. It was addressed to a member of the Albanian parliament. As the EURALIUS mission is not expected to contact any member of parliament (MP), it should have been in accordance “with the core values and objectives of the Project” if Team Leader Bernhard had requested “prior EU Delegation endorsement” before sending the legal opinion to Parliament; this EU Delegation endorsement is already necessary for communication with General Directors at ministries, so it should have been within the spirit of the contract to communicate with the EU Delegation before sending off such a potentially controversial document to an MP of the ruling majority.

Exit therefore inquired with the EU Delegation in Tirana whether EURALIUS had received prior endorsement of the Delegation to send its legal opinion to socialist MP Ulsi Manja. Last Friday, we received the following answer:

EURALIUS IV delivers its services directly to the beneficiaries: the Albanian authorities. Their legal opinions are those of independent experts.

They do not seek nor require the prior endorsement of the EU Delegation.

As may be clear from the answer, the EU Delegation itself appears to be uninformed about the Standard Operating Procedures of the EURALIUS IV mission. These clearly mention that in the case EURALIUS is not communicating with its main partners in government – the Ministry of Justice, the courts and the Prosecution Office – prior endorsement is necessary. Therefore the claim that EURALIUS “do not seek nor require the prior endorsement of the EU Delegation” is false. The contract stipulates cases in which such endorsement is required, and there is good argument to make that the legal opinion issued to Ulsi Manja is one of them.