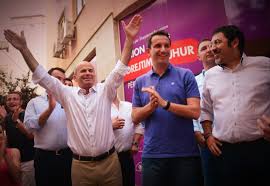 The company Alko Impex Construction, owned by Arbër Abazi, nephew of Socialist MP Sadri Abazi, has been awarded €10.8 million in tenders by 7 Socialist-run municipalities, from 2014 to 2017. The tenders mainly concerned city cleaning and tree-planting. Six of the company’s concessionary contracts have been awarded by the Tirana municipality, two of which concerned the cleaning of Tirana Area III, priced at respectively €4.9 million and €4.1 million and were awarded for the 2016-2017 period.

However, according to documentation filed at the Commission for Public Procurement (KPP), the company has used falsified documents to win at least two of the “Area III cleaning” tenders, using the same fake documentation as in 2014. Consequently, the tenders it has been awarded should be considered illegal.

The criteria for the 2014 tender, valued at 180 million lekë, for the cleaning of Tirana Area III stipulate that “the concessionary company must have hired a degree-holding environmental engineer, certified by the Ministry of Tourism and Environment” and that “the concessionary company must present a licence issued by the Ministry of Transport and Infrastructure with an ‘environmental engineering works’ designation.”

Alko Impex Construction has failed to fulfill these criteria. In its Ministry of Transport and Infrastructure-issued licence, the company has listed 8 engineers as employees. However, the company presented a falsified university diploma for Bekim Selmani. This licence, then, was illegally issued.

Meanwhile, four other persons that are listed on the license are not listed in the company’s payroll. Their personal identification numbers do not match the numbers of anyone employed by the company.

As one can see in the images above, they are not listed in the company’s payroll as full-time employees with a regular contract, which was part of the tender criteria.

The tender criteria also included “previous experience in carrying out similar projects.” With regards to this criterion, the company has presented a contract with the Prishtina municipality, concerning “Cleaning of streets and sidewalks” which to claimed to be at €15,000 per week, while in reality it was for the sum of €4,600 per week. Furthermore, this contract was never finished so the amount estimated on April 20, 2014 is inaccurate.

These same falsified documents have been used by the company to win the Tirana municipality tender for the “Area III clean up” in December 2017 as well.

Alko Impex has been registered since 2008 in Albania as a branch of Kosova company Alko Impex General Construction owned by Imer Ademi. However, the company’s activities from 2008 to 2014 have been almost nonexistent. According to data from the National Registration Center (QKR), the company’s profits have increased tenfold since the Rama government took over in 2013.