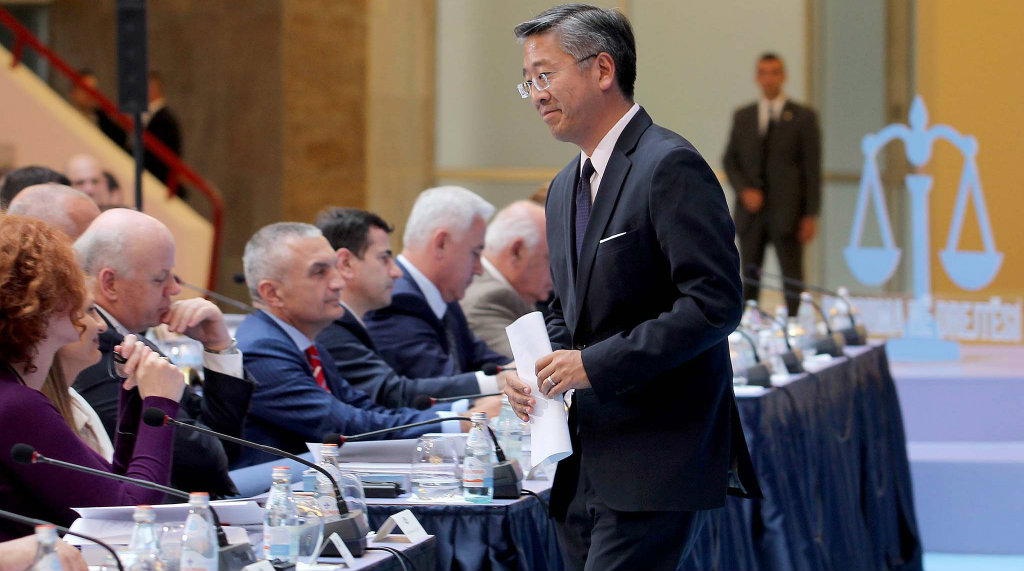 US Ambassador Donald Lu asked former General Prosecutor Adriatik Llalla to stop a criminal investigation of Bankers Petroleum for an explosion which damaged about 200 houses in Patos-Marinëz, Fier in 2015. 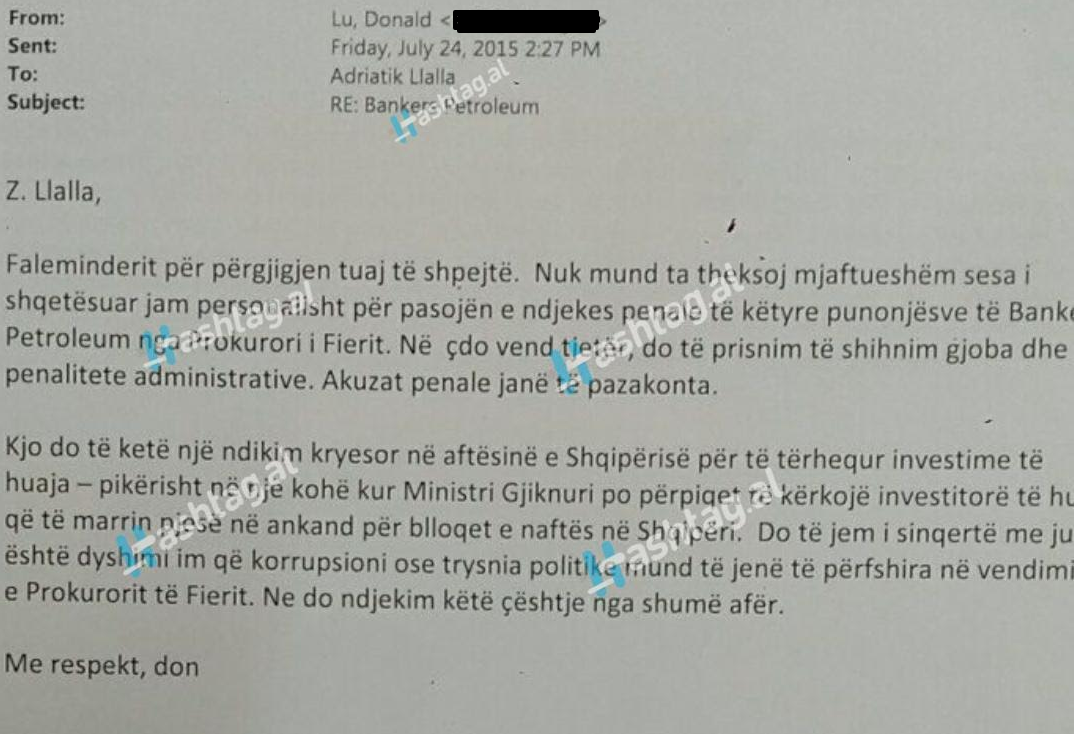 Yesterday, the online media outlet Hashtag.al published an email that Ambassador Lu sent, on July 24, 2015, to the then General Prosecutor Adriatik Llalla. The email, written in Albanian, reads:

I can’t stress it enough how concerned I am personally for the consequences of the criminal investigation against the Bankers Petroleum employees by the Fier Prosecution Office. In any other country we would expect to see fines and administrative penalties. Criminal charges are unusual.

This will have a major impact on the capability of Albania to attract foreign investments – exactly at a time when Minister [of Industry and Energy] Gjiknuri is trying to seek foreign investors to participate in the auctioning of [onshore] oil blocks in Albania. I will be sincere with you, it is my suspicion that corruption or political pressure might have influenced the decision of the Fier Prosecution Office.

We will be following this matter closely.

This email followed a formal letter, on behalf of the US Government, sent a day earlier to Llalla by the ambassador, which was made public, two years ago, by the daily newspaper Dita. Using, of course, a more careful wording than in the email, Ambassador Lu asked Llalla to end the investigation on Bankers Petroleum. It is also now known that, around the same period, Ambassador Lu visited General Prosecutor Llalla’s office, together with Bankers CEO David French, again asking the prosecutor to drop the criminal charges against Bankers. 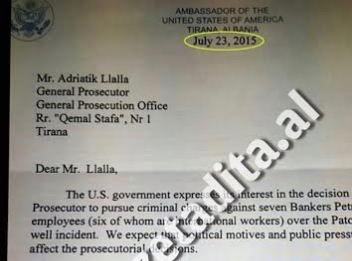 Bankers Petroleum, the largest company in Albania, is an offshore incorporated and Canada-based oil company, which has the exclusive exploration and extraction rights in the Patos-Marinëz area. In 2017, the company was bought by a Chinese company.

The investigation in question focused on several explosions at Bankers drilling sites in Marinëz, which happened on 2 April 2015, damaging around 200 houses in the nearby village of Zharrëz. At least one of the explosions occurred during efforts to reactivate an idle well without any proper permission to do so. The Fier Prosecution Office opened a criminal investigation on  “destruction of property due to negligence” and “air pollution.”

It is unclear why the US Ambassador involved himself on this matter – he has never publicly commented on it – given the fact that Bankers is not a US company and is unrelated to any known US interests. Nevertheless, it is now clear that Ambassador Lu attempted several times to force former General Prosecutor Llalla to stop the investigation.

Not only does Ambassador Lu ask former General Prosecutor Llalla to drop any criminal indictment of Bankers, but he also seems to suggest the course of action prosecutors should take and the sentence they should ask. He, furthermore, politicizes the investigation by suggesting that Llalla’s actions would have a negative influence on the efforts of the Rama government to attract foreign investments. Lu implies that Llalla and the prosecutors in Fier should not decide the case based on facts and the Albanian law, but in such a way that would serve the government.

It is obvious that Ambassador Lu’s email might constitute an attempt to obstruct justice by unduly influencing a criminal investigation. In the US such action is considered a serious crime; the federal US code has 21 statutes related to all different actions constituting obstruction of justice. One of these statutes, 18 U.S. Code § 1512 relates to efforts by someone who “obstructs, influences, or impedes any official proceeding, or attempts to do so.” Under this statute a person found guilty of obstruction of justice shall be fined or imprisoned up to 20 years or both.

Just to put Lu’s case in context: President Trump is being currently investigated by the Special Prosecutor Robert Mueller on a case that pales in comparison with Lu’s direct insistence and threats to Llalla to stop an official investigation.

Moreover, Ambassador Lu’s actions openly interfere with the domestic affairs of Albania, which is a violation of the Vienna Convention on Diplomatic Relations.

While Ambassador Lu is protected by diplomatic immunity and cannot be held accountable for his violations of the Albanian law, the moral and ethical consequences of his actions cannot be underestimated. His continuous, blatant involvement in several ongoing investigations in Albania is a travesty of the principles of rule of law and the separation of powers, which are the hallmarks of the US government he represents.

Unfortunately, Ambassador Lu has attributed many of his dubious actions to the US government. In this email, as in other cases in which Lu tried to impose himself into official proceedings, Lu uses the plural “we,” implying “we, the US Government.”

It is difficult to imagine that it was in the interest of the US government to intervene directly into the Bankers case; it is a foreign company, registered offshore, owned by a Chinese company, which allegedly evades taxes and carelessly damages private properties and pollutes the environment in Albania. It is therefore more likely that Ambassador Lu has used and abused the name of the US Government on a matter that was of private interest to him.

In fact, Ambassador Lu suggests as much. In the email he states that his concern, which he “could not express enough,” was “personal.” The reason why he was personally concerned is a matter of speculation, but the main question here is how can an ambassador be allowed to abuse his position and the name of the US Government to promore private interests.

The email also reveals Ambassador Lu’s now familiar approach of unwarranted accusations of corruption and political interference. In the email, Ambassador Lu states that he suspects “corruption or political pressure might have influenced the decision of the Fier Prosecution Office.”

But why does he have these suspicions? We do not know. In fact, a criminal investigation for “negligence” causing an accident that has damaged property and the environment sounds like the right thing to do. It is also unclear who the Ambassador thought might have politically influenced prosecutors, given that the 200 poor families of Zharrëz do not have any political leverage or economic power, as they live on less than $5 a day.

What we do know now is that Ambassador Lu used accusations of corruption and political influence against those that did not bend to his will. Only a few months after the email, Ambassador Lu started attacking Llalla, when he did not drop the investigation, calling him an enemy of the justice reform and, later, a corrupt prosecutor.

The case of political influence by prosecutors was furthermore used by Ambassador Lu to defend former Minister of Interior Saimir Tahiri, one of the closest collaborators of Ambassador’s Lu until he was suspected and investigated in both Italy and Albania for aiding and abetting drug trafficking and membership of a criminal organization. In all the three public comments that Ambassador Lu has been forced to make about Tahiri he has been careful to imply or directly refer to possible political interference in his investigation.