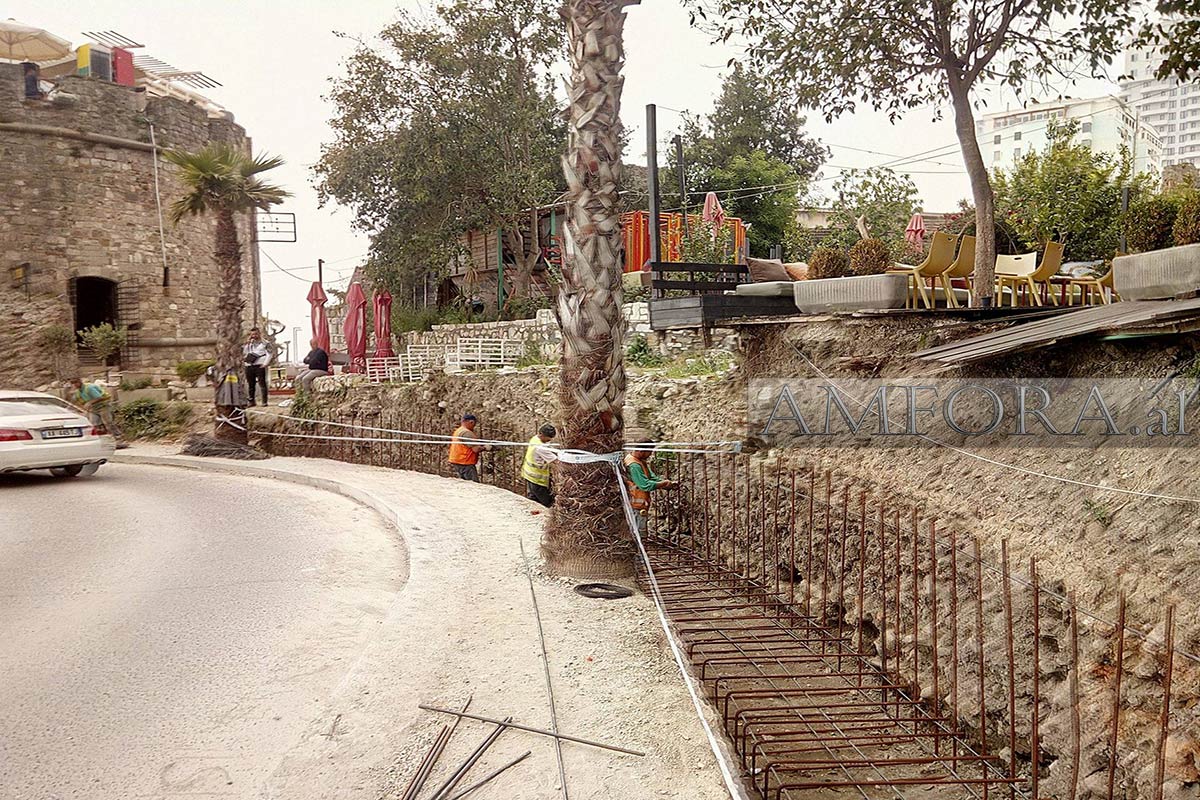 In February 2017, the Administrative Court of Durrës decided to suspend the construction work for the Veliera project, after the discovery of ancient walls during excavation works for the square. This decision was later confirmed in appeal.

While the court’s latest decision on whether constructions will continue has yet to be announced, the private company responsible for the project has gradually begun construction in the protected Archaeological Zone A.

Two weeks of monitoring by media outlet Amfora has revealed that a layer of concrete has been laid on the road and the ancient walls. The construction work is mainly focused in the area across from Venetian Tower, where manual construction is taking place, iron foundations are being placed and they’re expected to be filled with concrete apparently to build a sidewalk.

Amfora inquired about the construction at the Durrës municipality, and they were informed that the announcement of the court decision allowing the continuation of the work is expected. If the decision will forbid the continuation of the constructions, the municipality will appeal it. Yet, even though 50 days has passed, the decision still hasn’t been announced.

Sources within the Durrës municipality added that the constructions currently being carried out by the private company are not located in the area defined by the court.

In July 2017, the company Everest sh.p.k. began tearing down the antique wall connected to the Venetian Tower on Veliera Square. The wall was a Category I Cultural Monument.

During this time, Amfora informed the director of the Regional Directorate for National Culture Durrës and, following their interference, further damage to the monument was avoided.

The plan for the sidewalk set to be built in the area seemingly had failed to take into account the presence of the antique wall, which led to the illegal destruction of the monument. The current constructions risk damaging the wall further, in addition to two blocks of carved stones that have been unearthed but not yet moved by archaeological institutions.

Additionally, the construction near the Venetian Tower risks covering in concrete the foundation of the ancient walls, which was covered with gravel in order to conserve it, by the decision of the National Archeology Council (KKA).

In May 20 2017, several large troughs were dug in Archaeological Zone A for the planting of palm trees. After Amfora tipped off the appropriate institutions the company refilled the troughs that endangered the archaeological objects.

Citizens have pushed back against all infractions against the archaeological digs and have organized several protests. Furthermore, a Roman pilaster, containing traces of Illyrian culture, was covered in concrete, and no individual or institution has been held accountable for its destruction by law enforcement or cultural institutions.

It seems that Durrës municipality projects keep endangering the city’s archaeologically rich underground strata. Earlier this year, BIRN discovered that the municipality project foreseeing the construction of an underpass as well as the construction of the Palace of Justice on the site of the Martyrs’ Mausoleum threatens to annihilate what has survived of an antique Roman neighborhood, and, along with it, according to archaeologists, a historical era in which the coastal city peaked.

This article was first published on Amfora.al, translation by Exit.