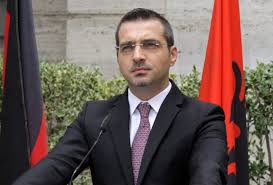 It seems Prime Minister Edi Rama has asked his former Minister of Interior Affairs and right hand Saimir Tahiri to resign, following pressure from Germany setting the latter’s arrest as a condition for opening accession negotiations.

Via a press conference from the Socialist Party’s headquarters, MP Tahiri, who has been accused for months of being part of the criminal Habilaj gang, resigned. This means that the Prosecution Office is now free to arrest Saimir Tahiri.

They voted for the vetting of prosecutors and judges, like sheep, with two ambassadors that to, at least, my shame, applauded it over our heads. […] and I sit and hear about who caught the biggest fish.

Additionally, Tahiri accused Minister of Interior Affairs, Fatmir Xhafaj, of lying about the existence of gangs in the country.

Below, find the highlights of Tahiri’s statement:

I am Saimir Tahiri and I do not need an MP’s immunity to protect me from justice.

I am not a clown and I don’t have to be an MP to go toe to toe with political clowns.

Until justice is done, I will not be a Member of the Albanian Parliament anymore. Today’s match is not my last one, but my first and I will keep going until I make it.