Albanian Capitalism Returns to the Kiosk 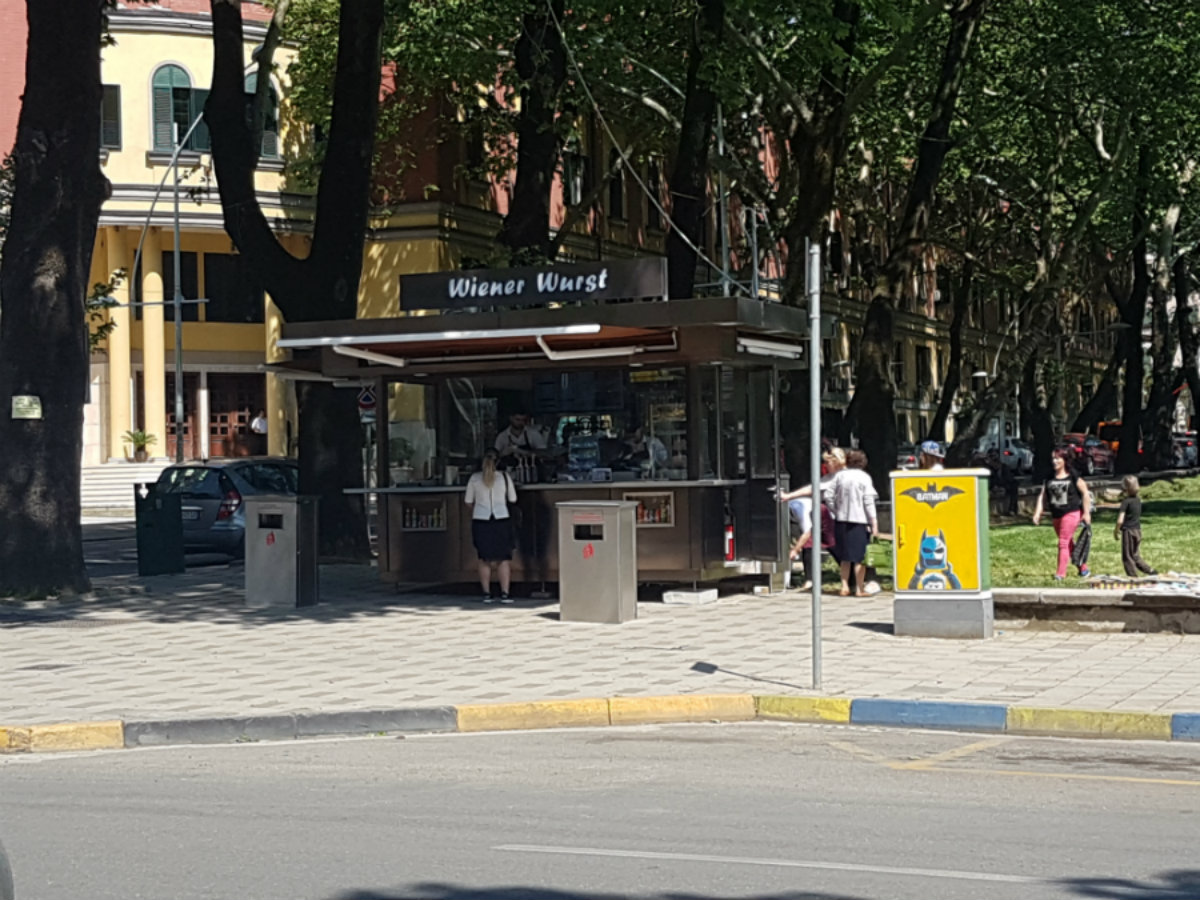 The kiosk was a true economic model in Albania during the first half of the 1990s: in the beginning it was unemployed citizens who requested a license from the municipalities to put a kiosk at some corner, garden, or city square. Then, with very little money, they would build some shack to sell cigarettes and toothpaste, just to have a minimum income in a very poor trade market.

Then, month after month, the barracks became more and more numerous, always bigger and increasingly luxurious, hosting increasingly complex services, from small businesses to barbershops or lighter repairs, to restaurants or nightclubs.

Tirana, in particular, became submerged in constantly expanding kiosks, from the Rinia Park to the shores of the Lana river. In every green or even concrete space, a forest of kiosks began to develop and grow in width and height, as the activity generated some surplus to be turned into investment.

What was supposed to be a mobile and temporary solution took root and developed into a wave of abusive constructions.

Already in 1996, in Tirana there were kiosks with three or even four floors, hosting luxurious restaurants, out of which some of the protagonists of Albania’s next economic elite emerged: traders, importers, builders – many neocapitalists were born, or created their initial capital in an abusive kiosk. Some of them continued to grow into the current oligarchs.

When Prime Minister Pandeli Majko took office in September 1998, Tirana’s center resembled Disneyland, with its most imaginative kiosks, from gigantic whales with huge open mouths, to castles of various types, to the legendary Bar West in Rinia Park, the preferred hangout spot of all the Albanian journalists of the period, which would soon become a crystal tower of multiple storeys.

Majko was the first to understand that this cornucopia served only to make Albania’s capital look ridiculous and, in early January 1999, he began to have the kiosks on Skënderbeg Square removed. However, the outbreak of the Kosovo war distracted attention and government resources to more important topics, such as aiding Kosovar refugees arriving in Albania.

When in 2000 Edi Rama became mayor of Tirana, he resumed the project and unleashed hell, summoning all the major construction companies, and soon all the kiosks in the Rinia and Lana parks were removed or demolished.

Yet in Albania, the marriage of the logic of power and the logic of economics often gives rise to abuse, and the irrepressible energy that engendered the abusive “kioskization” of Tirana was soon channeled into business, which went on to be often as abusive as its predecessor, with ugly, multi-storied buildings oftentimes procured via corruption or fraud. This unholy union of politics and business has been brilliantly described as “one apartment building, one vote.”

After a ten year at times half-hearted struggle against illegal constructions, the aggressive Albanian capitalism, born of many kiosks and too many smugglers, began to have higher aspirations beyond merely the construction of apartment buildings, dedicating itself to the construction of shopping centers, touristic villages, hydropower plants, pretentious hotels, to finally arrive at the biggest challenge yet. A true European-level enterprise: mobile telephony.

Under the guidance of the most enlightened and rich Albanian entrepreneur and lobbyist, a handful of neo-capitalist heroes pooled together their, not always of clear origin, capital for a challenge worthy of contemporary Europe: the creation of a fourth mobile operator, with the concealed purpose being to sell it soon afterwards to one of the country’s other three operators.

However, none of the European-owned operators fell into this trap and the presumptuous Albanian schemers were left with nothing but dust.

After various court cases and many losses, one after the other, the great capitalists left the game, often with broken noses, having had to personally absorb the debts of the company, and today the company is effectively bankrupt and no longer operates. The urban legend of the fourth mobile operator has evaporated along with several tens of millions of euros and another urban legend, that of the infallible Albanian business, able to face any challenge, if only it had the necessary capital.

Today, two of the main protagonists who survived the adventure, after having licked their wounds, have come back to attack the market with an enterprise perhaps more suited to them: that of the kiosks.

The brilliant intuition seems to belong to the owner of Top Channel, one of the main former shareholders of Plus, who, evidently uncomfortable in the family business of television, decided to take advantage of the friendship with the current Tirana mayor to obtain a concession to put several kiosks along the main streets of Tirana, selling cigarettes and snacks, a monopoly, until then, of poor street vendors, presumably destined to be forcibly chased into extinction with fines by the Municipal Police.

However, imitation is one of the most effective mechanisms in Albanian business, and, immediately, a former colleague of the Plus adventure, a true champion in the distribution of stimulating substances (Red Bull and Ama Caffe), realized that this was the “new frontier” and, perhaps nostalgic for the best years of his youth in the streets of Vienna, decided to open a chain of kiosks named “Wiener Wurst” selling roasted käsekrainer, bratwurst, and weisswurst stuffed in a bun and topped with mustard or ketchup, the typical “hot dog” served the Viennese way.

The mayor must liked the idea, perhaps as a means to justify some suspicious real estate operation in the center of Tirana, and, within a few days, elegant burnished aluminum kiosks occupied several strategic corners of the Tirana promenade, blocking the sidewalk with poorly fitted stainless steel tables, but ready to feed Western European-inspired food to passers-by.

Again, compared to the old battle between kiosks, the two apparently competing chains actually do not compete at all, one selling cigarettes, drinks and pre-packaged snacks, the other energy drinks, beers, coffee and fast food. Competition remains only for location, to obtain the best spots from the mayor.

Yet, the prices seem rather exaggerated: 490 lekë for a bratwurst or a käsekrainer, presumably produced in Korça, with meat imported from Brazil, to be consumed standing in the street. One wonders why the target clientele seems to be exclusively that of the luxury restaurants of the center. Perhaps the oligarch simply has lost all touch with the Albanian reality, or perhaps they simply need to justify cash flow.

In conclusion, the new terrain of confrontation, the new entrepreneurial fashion, which will inevitably end up including, once again, all the Albanian tycoons has now been identified, and it represents a true cultural regress – instead of investing in business ventures that are useful to society, perhaps by exporting, producing in order to replace import, adding some new service to the market, or at least employing some newly graduates, our capitalist champions have returned to their origins: from the kiosk they came, to the kiosk they return.