In recent days, the opposition and several media outlets have published documents regarding the conviction of Agron Xhafaj, the brother of Minister of Interior Fatmir Xhafaj, by the Supreme Court in Italy for membership of a drug trafficking organization. 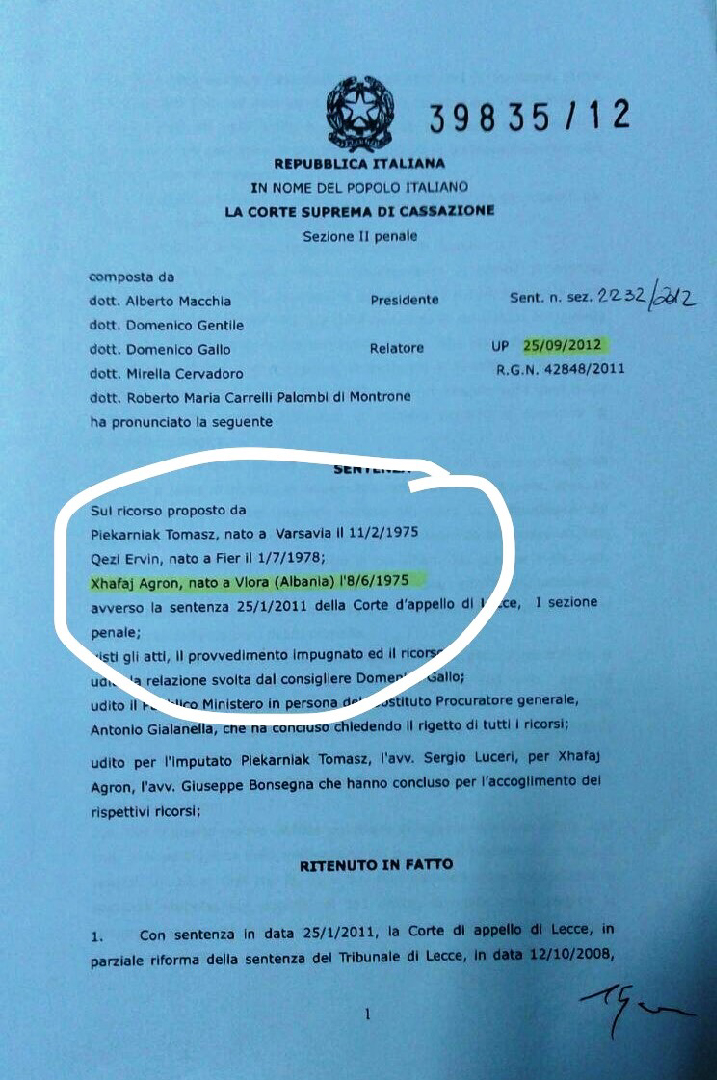 These details are not new. When Xhafaj was nominated as Minister of Interior toward the end of Edi Rama’s first term as Prime Minister, his family ties with organized crime, as well as his background as investigator and prosecutor during the communist dictatorship, had become known. Then, as now, Xhafaj continues to protect his brother, and Prime Minister Rama has even taken the extraordinary step of claiming that unless the US Ambassador confirms the verdict of the Italian Supreme Court, it is not true. US Ambassador Lu retorted that Rama shouldn’t speak in his name.

Even though Minister Xhafaj cannot be held responsible for the actions of his brother, it remains questionable whether a minister whose direct family is implicated in international drug trafficking can be a credible figurehead of the fight against organized crime. Moreover, as a close family member of a convicted member of a criminal organization, he would fall under the purview of the Anti-Mafia Law, and his assets should be investigated by the Prosecution Office.

This situation is even more complicated, because Agron Xhafaj was convicted without being present in court (he was however represented by a pricey lawyer from Bologna, Giuseppe Bonsegna), and is generally believed to reside in Albania. Xhafaj is responsible for the State Police, which should arrest his own brother.

There is substantial evidence to believe that Xhafaj was involved in a last-minute amendment of art. 491 of the Criminal Procedure Code (KPK). Art. 491 determines the conditions for the “Non-admissibility of the request for extradition.” This article was amended as part of Law 35/2017 of March 30, 2017, and it is precisely the way in which art. 491 was amended has now come under intense scrutiny.

The draft law was deposited in Parliament on December 28, 2016, and taken up by the Commission of Legal Affairs, then headed by Xhafaj. Art. 268 of the draft law proposes an addition to KPK art. 491, namely that extradition of an Albanian national would not be granted “f) when the requested person is tried in absentia and does not agree to be extradited.”

In her argumentation for this addition, Socialist MP Vasilika Hysi argued that the addition of paragraph f) would “respect […] the provisions of the Fourth Additional Protocol to the [European] Convention on Extradition.”

The minutes of the session of the Commission of Legal Affairs on March 13, 2017, chaired by Fatmir Xhafaj and boycotted by the PD, of several legal experts including EURALIUS expert Koraljka Bumçi and OPDAT expert John Smibert, show no discussion of the proposed amendment of KPK art. 491 or extradition in general.

However, something in the text of the amendment changes between the final session of the Commission of Legal Affairs and the moment the draft law is presented to Parliament. The report sent by the Commission of Legal Affairs to Parliament claims that the integral text of Law 35/2017 contained in it reflects the public discussion held in the commission and all comments provided by legal experts, including those from OPDAT and EURALIUS, and moreover details the amendments to KPK art. 491 on page 32:

In art. 491 of the [Criminal Procedure] Code in relation with cases of not granting extradition two other paragraphs have been added except those envisioned, which are “when criminal prosecution or the punishment is prescribed under the law of the requested state” and “when the requested person is tried in absentia, and does not agree to be extradited” […].

Also in case the requested person is tried in absentia and does not agree to be extradited, art. 491(2) has been added determining that the Ministry of Justice invites the requesting state to seek the recognition of the foreign criminal conviction and its execution. […].

So far, so good. These amendments reflect the text of the initial draft law, as well as the discussions in the Commission of Legal Affairs.

However, the integral text of Law 35/2017 included as an annex to the report completely changes the amendment (p. 124):

f) when the requested person is tried in absentia, except in case the requesting State provides safeguards for the revision of the decision.“

This is also the version unilaterally approved by the Socialist majority in Parliament (the PD boycotted the vote). In other words, somewhere between page 32 and page 124 of the report signed by Xhafaj the amendment of KPK art. 491 has changed from a procedure that allows a foreign verdict to be recognized in Albania if an Albanian citizen refuses to be extradited and to demand that a foreign state should “provide safeguards for the revision of the decision” as a condition for the extradition of an Albanian national tried in absentia.

The person responsible for this change – whether he made it himself or not is irrelevant – is the chairman of the Commission of Legal Affairs, Fatmir Xhafaj. Xhafaj also had a motive to make this unlawful change in the article dealing with extradition: his own brother was threatened by extradition to Italy, and paragraph f) would possibly offer a way of obstructing that possibility.

Update: Considering the fact that Agron Xhafaj retained a high-profile lawyer, it is unlikely that he was tried in absentia – he must have known about the proceedings and by not appearing waved any rights to demand a retrial. However, this does not diminish the problems with the illegal changes in the Criminal Procedure Code.