EURALIUS as a Colonial Institution 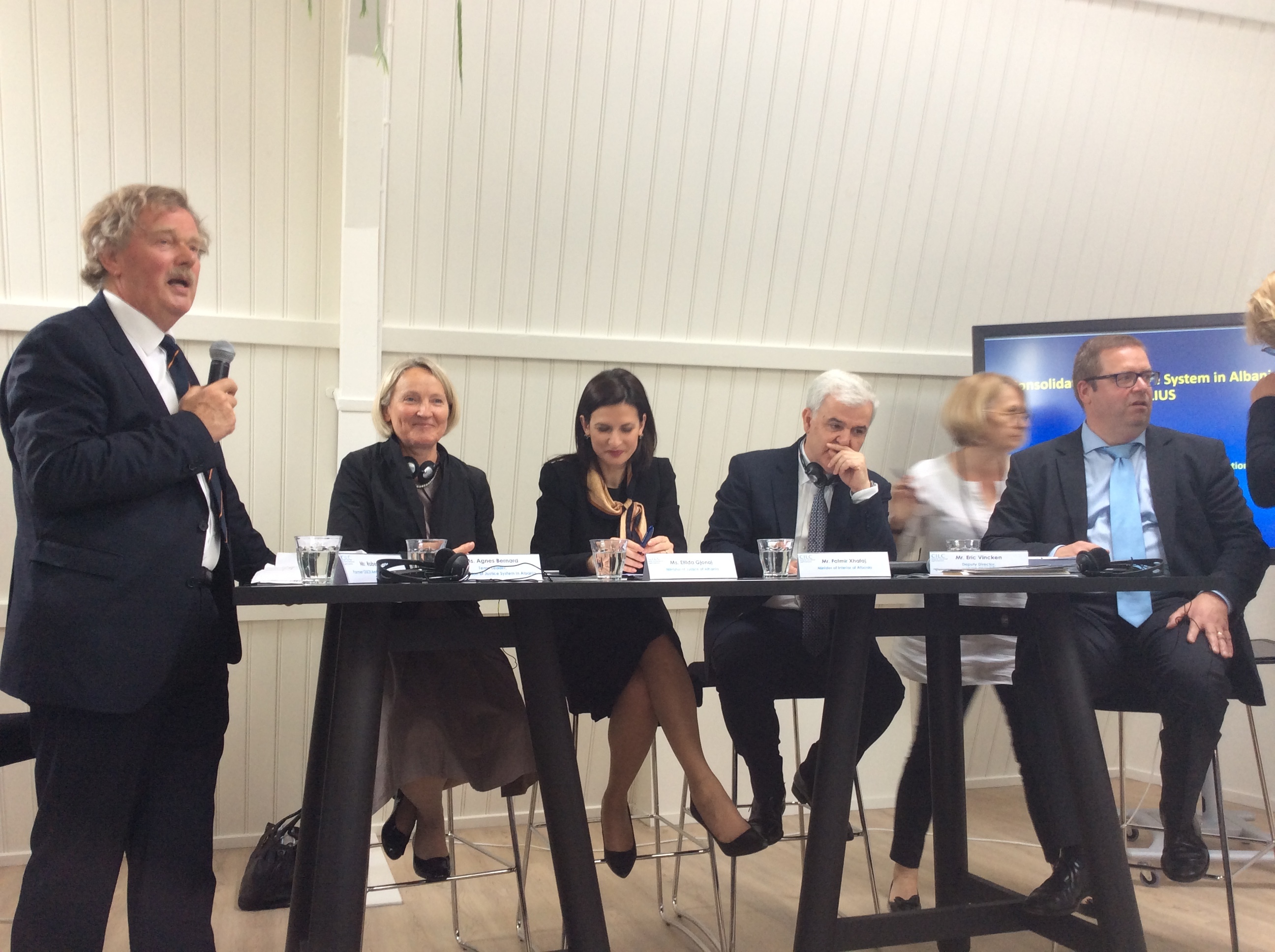 Frequent readers of Exit may have followed my ongoing attempts to uncover the decision procedure behind the “legal opinion” that was drafted by the EU justice assistance mission EURALIUS and US justice assistance mission OPDAT at the request of Parliamentary Legal Affairs Commission Chair Ulsi Manja, providing the government with much needed arguments for the unconstitutional election of a Temporary General Prosecutor in December 2017.

The election was criticized by international watchdog organization Freedom House as “undermin[ing] the independence and credibility of the prosecution in the sensitive Tahiri investigation.” The consequences of this election have become well known. Temporary General Prosecutor Arta Marku intervened directly into the Tahiri case by dismissing Serious Crimes Prosecutor Besim Hajdarmataj, replacing him with her close confidante Donika Prela. Violating the constitutional limits on her powers, she further suspended two other prosecutors, and established “special prosecutors” in collaboration with the Ministry of Interior, as the Special Prosecution Office remains to be in limbo due to the slow pace of the vetting.

In short, the “legal opinion” co-authored by EURALIUS has been the cause of a constitutional crisis and legal vacuum that has remained unresolved, as the Constitutional Court itself has become non-functional due to the vetting.

EURALIUS itself initially denied my request to obtain the “legal opinion” from them, after which I filed a freedom of information request at the European Commission. The European Commission then claimed (as it turned out falsely), that from 2014 to 2017, EURALIUS had drafted only a single such document.

After requesting the contract signed by the consortium leading the EURALIUS project with the European Commission, I discovered that the legal opinion fell outside the Standard Operating Procedures (SOP) defined in the contract, which excludes direct contact with the Albanian Parliament without express permission of the EU Embassy in Tirana.

In parallel, I filed an FoI at the Albanian Parliament to receive a copy of the “legal opinion” in their archives, as well as the letter of Legal Affairs Commission Chair Manja requesting it. Parliament denied my request, stating that the document was available on the EURALIUS website. This is not the case. As of today, the “legal opinion” is not publicly available on any official website and remains officially inaccessible to the public (even though a copy of it has been leaked through the media).

In order to find out the way in which this “legal opinion” fits into the mission of EURALIUS, which ironically is “to improve the independence, transparency, efficiency and effectiveness of the Albanian justice system,” I subsequently filed a FoI request for the “inception report, and all work plan, semi-annual progress reports, monthly progress reports, ad-hoc reports, as well as the final report submitted by the project team” of EURALIUS. Because if EURALIUS indeed followed its own SOP, there should have been a report to the EU Delegation about the drafting of the “legal opinion,” as well as an argument for its pertinence. After delaying the delivery of the documents three times, the European Commission finally decided only to provide me with the final report.

What we can gather from this final report in relation to the “legal opinion” drafted in December 2017 is two things.

First, contrary to the claim of the European Commission in their letter from January 16, 2018, EURALIUS has in fact drafted not one, but five legal opinions over the years:

This means that the information provided by European Commission in their letter, namely that only “one document” matched the description “legal opinion” was at least incomplete.

Second, the “legal opinion” drafted in December 2017 is missing from the final report. The reason is simple: the final report is not final at all; it covers the activities of EURALIUS until May 31, 2017, thus conveniently leaving out all its activities until its mandate was officially over, at the end of 2017. In fact, it left out all its activities in the period the consortium leading EURALIUS was competing in a public tender to manage the next phase of the project – which it won (surprise!).

The European Commission’s reason not to provide me with all the other reports – which would have included the monthly reports until May 2018 — was the following:

these reports (e.g. weekly and monthly progress reports) contain extensive information on the methodology and detailed activities which were primarily outlined in the project’s proposal and which constituted inside knowledge of the consortium. In addition, these reports often contain the views and the results of analysis (e.g. assessments, concept papers/policy papers) carried out by the project team on the particular aspects of judicial reform which constitute intellectual property of the consortium.

So the rationale behind the “legal opinion” supporting the unconstitutional election of the Temporary General Prosecutor, as well as all other legislation proposed by EURALIUS and approved wholesale by Albanian Parliament with hardly any form of serious debate, is “intellectual property.” If anything screams out the neoliberalization of government enforced by EU bureaucracy this is it. Albanian (and EU) citizens are unable to understand the decision making processes behind one of the most drastic judicial reforms ever performed on the European continent because of intellectual property rights.

In this way, the European Commission can only tell the public what EURALIUS did (it helped drafting laws x, y, z), but not why this was done; it is unable to tell us why certain legal opinions were written. But this is precisely the question that haunts the “legal opinion” of December 2017: Why did EURALIUS write a legal opinion explicitly aimed at helping the government unconstitutionally elect a Temporary General Prosecutor, which led to the complete capture of the prosecution by the Rama government?

As always, the posing behind “commercial interests” and “intellectual property” are nothing but an attempt to avoid the real question, which is one of political accountability. EURALIUS has been used by the European Commission, and the EU Delegation in Tirana in particular, to hide its political agenda (namely an open and explicit support for the Rama government), mask political decisions as technical legal assistance that is then covered by intellectual property right, and subsequently deny any access to them by claiming commercial interests. This is not only irresponsible, it is also dangerous. Because the consortium that runs EURALIUS, in turn, feels unassailable and beyond reproach – literally above the law.

When in December 2017 I asked for the “legal opinion” they had written, EURALIUS spokesperson Fjona Dollani wrote me: “Please be kindly informed that EURALIUS is a technical assistance project and has no public relation activity.” Yet EURALIUS team leader Agnes Bernhard recently took part in a “debate” together with Minister of Interior Fatmir Xhafaj and Minister of Justice Etilda Gjonaj in The Hague, which was clearly a “public relation activity” as it showcased the “successes” of the justice reform to a skeptical Dutch audience. So which one is it: Either you take part in PR activities, and you should be able to face the press, or you do not, and you can hide between a blanket rejection. EURALIUS does neither and doesn’t care.

On top of that, Eric Vincken, Deputy Director of the CILC (a partner in EURALIUS), later responded to my write-up of the The Hague event with an abusive email, accusing me of writing “agitprop.” When I later filed an official complaint at the European Commission about the behavior of Vincken toward the press, I received the following response:

After consultation with the European Commission’s Directorate General for European Neighbourhood Policy and Enlargement Negotiations we would like to thank you for your request of 25 May 2018 where you complain about an e-mail communication from the Deputy Head of the Center for International Legal Cooperation (CLIC) in The Hague, Mr Eric Vincken. This communication falls in the sole responsibility of the author and cannot in any way be attributed to the EU institutions.

This response confirms the way the EU has refused to take responsibility for any of the actions of EURALIUS, while at the same time protecting the conglomerate from outside scrutiny by citing “commercial interests.” EURALIUS thus turns out to be a tool, paid entirely by the EU tax payer, to shield the EU from criticism for the way in which they implemented the Justice Reform, even though the EU Delegation in Tirana has been closely involved in the process.

EURALIUS is not the only such organization in Albania that is beyond the law and beyond the democratic control of Albanian and EU citizens. Another is the International Monitoring Operation, which in spite of its considerable influence on the context and content of the vetting, is beyond public scrutiny. There is only one proper term for such institutions: colonialism. They establish the EU as a colonial project in Albania, in much the same way EULEX has operated in Kosovo. And this will, slowly but certainly, erode any remaining belief in the rule of law or democracy or any belief and trust in the EU.