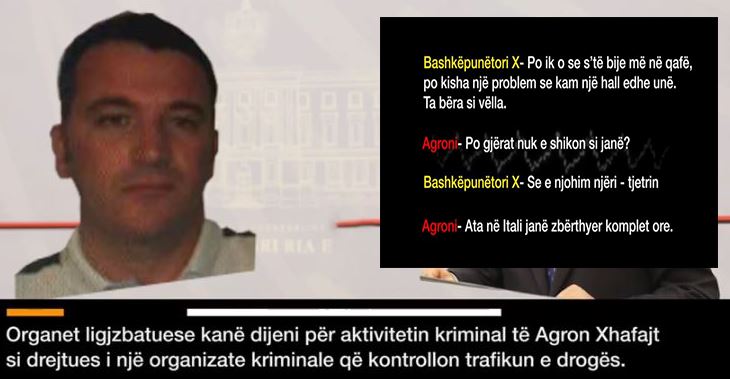 Several media outlets have reported that Prosecutor’s Office will not be able to get an analysis from the Italian Police of the much-disputed wiretaps, made public by the Democratic Party. The recordings comprise a dialogue between drug trafficker “Babale” and the brother of the Minister of Interior Affairs, the fugitive Agron (Geron) Xhafaj, that would have demonstrated that the Minister’s brother was still actively trafficking drugs.

The case poses a risk for Interior Minister Fatmir Xhafaj, and, presumably, the fate of the entire Rama government. Any evidence that Xhafaj – called in to replace former Minister Tahiri, who was also involved with drug trafficking, alongside his cousins – had a brother, who not only was a fugitive of the Italian justice, but remained active in the drug trade while his brother was in power, would render the political situation in the country quite unstable.

It is useful to recall that the Italian laboratories’ expertise was requested by the Prosecution Office after Prime Minister Edi Rama claimed to have acquired an analysis from an unknown foreign laboratory, which in less than 24 hours had concluded the recording was fake.

Later, media outlet Shqiptarja reported that someone else – who wasn’t wanted by any organ of justice – claimed to have played the part of Agron Xhafaj in the recording. This news, however, did not gain a lot of traction, perhaps because only 24 hours earlier opposition leader Lulzim Basha had denounced a similar attempt to discredit the news that Agron Xhafaj continued to be an active drug trafficker.

To lend credibility to a shoddy investigation – recall here that the Prosecution Office investigated the accusers before the accused – it sent the wiretaps to Italy to be analyzed. However, after three weeks, an official response has yet to arrive.

Meanwhile, Italian Ambassador Alberto Cutillo issued a series of ambiguous statements strongly in favor of former Interior Minister Saimir Tahiri and the Rama government, precisely during the days when a new Italian government was being formed in Italy. These statements, evidently not in line with the incoming cabinet’s political stance, provoked many reactions, both in Albania and Italy.

Today we learn from Albanian sources that an internal conflict of competences between two Italian ministries – the Ministry of Justice, which received the letter of request from the Albanian authorities, and the Ministry of Interior, in whose laboratories the analysis would be conducted – would further slow down the procedure.

Although credible given many precedents, the explanation seems aimed at hiding a very obvious fact. Namely that there is now a new Italian government, with a new, very powerful Interior Minister and a new Minister of Justice – appointed by two parties, so far uninvolved in any of the lenient habits with which the previous Italian political corpus treated the Albanian government’s criminal records. Perhaps, the previous Italian political willingness to illicitly collude with the Rama government has faded significantly.

Whatever the true result of the analysis turns out to be, unlike its predecessors, the new Italian government does not seem so intent on defending, with a sword in hand and a pre-established position, Albanian ministers that have been involved in drug trafficking.

All that remains to be seen is whether any other ambassador will offer the expertise of their country’s police laboratories to solve the problems of the Rama government.