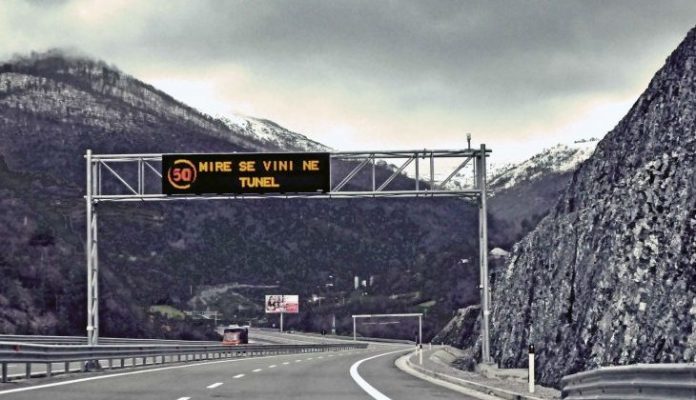 The government has decided to pay the Rruga e Kombit concessionary €48.5 million during 30 years, that is, more than €1.6 million per year, as a result of the decrease of the highway toll for Kukës inhabitants. This decision raises the overall cost of this concession to €350 million. Minister of Economy and Finance Arben Ahmetaj announced the decision last week, stating:

All the reductions […] for the citizens of Kukës, for buses, for frequent travelers, amount to €48.5 million. […] and the Prime Minister has decided that the State Budget will take this cost on: around €50 million for this significant reduction.

However, besides declaring the amount that will be paid, Ahmetaj gave no reasoning or information regarding the data and calculations that led to this amount. It seems, to make it look as scientific as possible, a decimal point has been added: €48.5 million. It is worth stressing that this amount is, on average, more than 20% of the annual value of the traffic guaranteed to the concessionary for the first year and similar values afterwards, until 12% is reached on the thirtieth year.

It is hard to figure out how the Ministry of Finance came to the assertion that the circulation of the Morina–Kukës accounted for nearly a fourth of the entire circulation that Rruga e Kombit will see. (The 25% was calculated going off of the fact that the compensation will cover 80% of the highway toll, as the inhabitants of the area will still have to pay 100 lekë per route.)

Beyond the seemingly inflated compensation amount, the fact that this amount is predetermined, and will not be based on the actual circulation is equally problematic: no matter how many citizens will use the highway, the compensation amount will be constant. Whereas the contractually defined way to deal with other ‘lost’ fees is that of post-payment based on actual, true-to-life, data: at the end of each month, the concessionary reports the number of vehicles that paid a reduced toll or no toll at all and demands compensation.

However, the most flagrant side of this solution presented by the government is that it violates the principles of competition, as well as the concessionary contract signed by the parties. The concessionary contract dictated that, for frequent users – mainly locals who are obligated to use the highway for their daily activity – a reduced toll would be introduced. However, this reduction would not be compensated separately by the government.

Article 11.8 of the concessionary contract provides:

The concessionary drafts and implements a reduced price scheme for frequent users. The scheme gets updated annually, at the start of the year.

However, in complete disregard of this regulation, the government inexplicably, and in violation of the contract, has decided to compensate the concessionary twice, directly, with a fixed sum, using the justification of reduced tolls for frequent users, and then again, at the end of the year, if the contractually guaranteed amount of income isn’t reached.

So, this first year, the government will not only pay the concessionary whatever amount he needs to reach an €8 million annual income, but will also pay him another €1.6 million to justify reduced tolls.

This unjustified, and likely illegal, favoritism of the Rruga e Kombit concessionary is another in a long line of suspect, corrupt practices that have accompanied this concession. As Exit has reported before, the Kastrati–Salillari consortium not only fails to meet any criteria, and lacks the competence needed for this concession, but it has also chosen to nominate as CEO of the concessionary company an Italian citizen who is currently on trial in Italy for neglecting his highway maintenance duties which led to a 40-victims accident.