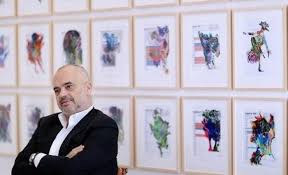 In recent days, art market prices of the art work of Edi Rama have seen a steep rise. The website ArtFacts, which tracks all artists and their careers worldwide, reports a recent 250% increase in prices of Rama’s well-known “doodles,” from €1500 in 2015 to more than €4000 at a recent auction in Kuwait during the Albanian–Kuwaiti Friendship Gala. This relatively large increase seems to be correlated with the massive student protests in Albania, which have now been going on for more than a week, and show no signs of dissipating.

One of the important factors determining the price of an art work is scarcity. Ever since Mr. Rama started his political career, the art market has been overwhelmed with a nearly endless stream of his “doodles.” Of course you try to make them a bit more special. So you add a special coating applied by Mr. Anri Sala, or you create limited-edition wallpaper. But the bottomline is: as long as Mr. Rama has access to government documents, the price of work will remain rather at the lower end of the scale.

The exciting thing with these protests is that there is now a real possibility that Rama will lose political power, and therefore access to government documents. This would put practically an end to the doodle production, and that’s why we see the recent price increase. People are betting the stream of doodles will dry up soon, and this drives up the price.

Uwe Neumann, director of the Kunsthalle Rostock, where Rama currently has a solo exhibition, is thrilled by the prospect that real political developments might engage with the white cube:

Look, the Kunsthalle Rostock dates from the communist GDR period, and was founded precisely “for reasons of foreign policy and cultural policy.” So already the fact that we are exhibiting the work of socialist politician, let alone the son of an important communist figurehead, is of course already very exciting.

But then to think that while the exhibition is on, the interpretation of his work might radically shift from the colorful celebration of third-way socialism to an image of the excesses and perversion of state power, is quite thrilling. We took a genuine risk programming Rama’s work; it’s fun but also a bit superficial – but you know, who doesn’t like colors? But these recent developments put the enormous investment in his art production, in terms of time and energy, in a completely new perspective. He actually made an enormous sacrifice by neglecting his country in favor of making art!

The excitement about this new, not wholly unexpected turn in the art-political career of Edi Rama is not equally shared among his contemporaries, especially those who have for years supported him and nurtured his career, often at the expense of their own credibility.

Hans Ulrich Obrist: I have always considered Rama’s work a prolongation of the Beuysian Gesamtkunstwerk, as a social sculpture at an unprecedented scale. He has single-handedly broken down the illegally built structures to create more park spaces, and I feel that the students don’t give him enough credit for what he has done for the country: “City forestation instead of city administration”!

Anri Sala: I am very interested in the sense of passing by, a continuous change of perspective towards what is happening and where we are. I mean, I have always let his actions pass by without saying a word. I looked the other way as he robbed the country. I listened to the sounds of the people on the street, strangely detached from their bodies, while he doled out favors to friends while squeezing every last penny from my fellow countrymen. Everything is vocal, everything has a voice. I hear the voice of Rama, and the voices of the students, and they all seem out of sync… it’s very interesting.

Obrist: Rama’s model of continuous interaction is fascinating. He once told me he was the first person to use Twitter for public debate! And you see how far this goes. He is completely in tune with the meme culture, welcomes the new generation with beliefs we all share, even though they are, as he said, completely ignorant of Communism and its crimes. They have a lot to learn. Look at ERTV, that’s the future of video art, right there.

Sala: I once did a film on Albanian communism, you remember, Hans? We didn’t really show it in Albania, because my mom’s in it…

Obrist (becoming increasingly agitated): Look at Tirana! How it was and how it is now! The colors, the wonderful buildings, how can they not see that?! I see it… I see Tirana in my dreams… The perfect realization of the artist-politician’s vision, a Beuysian paradise. All my career I have supported Rama, everything he did! I loved it! I adored it! He represented the ideal artistic practice! His legacy will live on, forever! Doodles, sculptures, wallpapers, napkins, wine bottles! Rroftë artisti i madh Edi Rama!

This article is a piece of satire. All people and statements are entirely fictional.