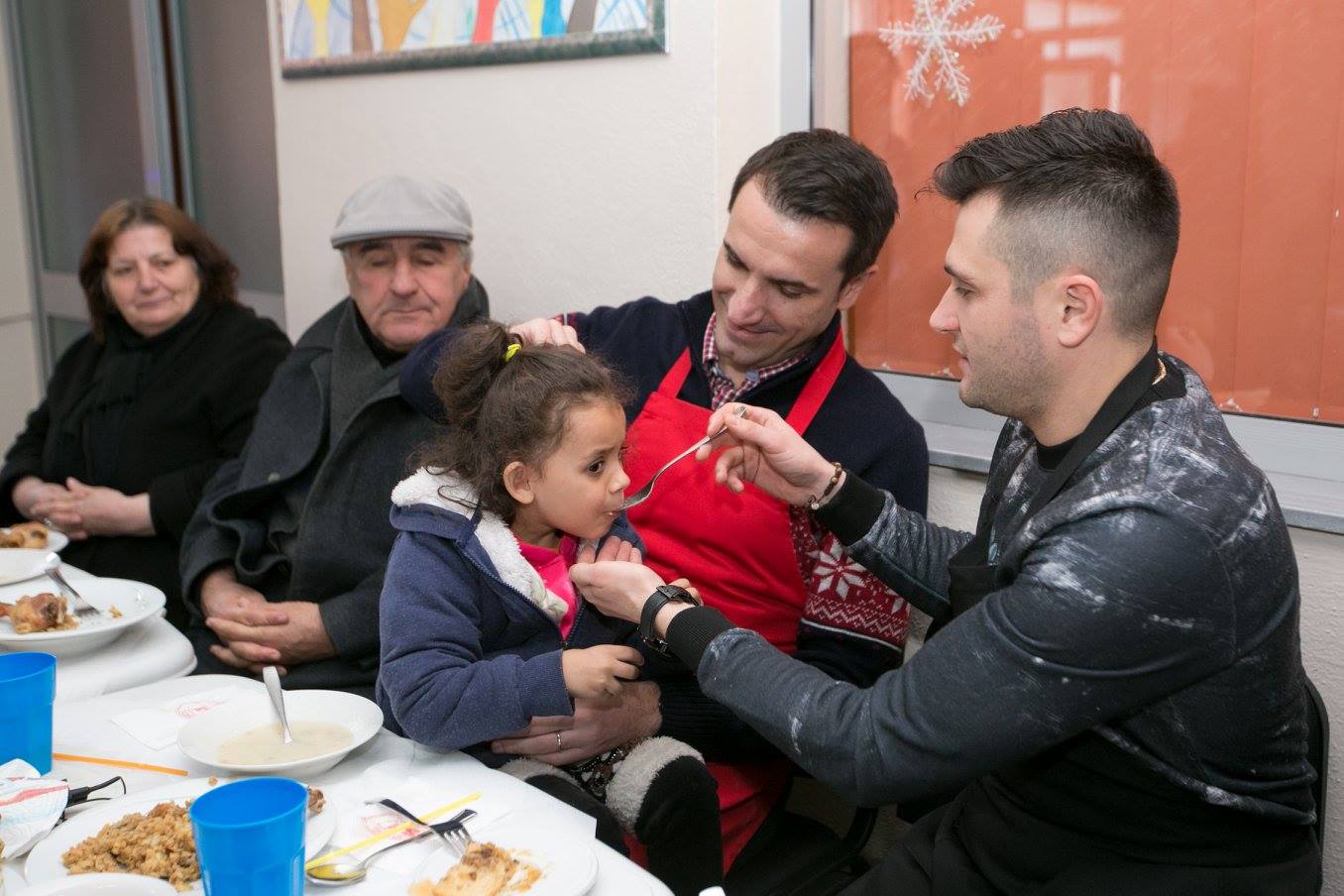 Mayor Erion Veliaj of Tirana at a Christmas dinner for the poor, December 25, 2016. Source: Facebook.

Mayor of Tirana, Erion Veliaj was nominated by UNICEF Albania as a success story for the work he has done for children in the city, particularly in terms of entertainment, green spaces, playgrounds, nurseries, kindergartens and schools.

As a result of his nomination by UNICEF Albania, he was invited to the First International Child Friendly Cities Summit organised by the group and the Cologne Municipality in Germany. Veliaj spoke of the challenges he has faced during his last four-year mandate, yet also how he managed to “transform Tirana into an exemplary city where children are first.”

Veliaj stated that a city that invests in children means it is investing in a better future for society.

“It was a great pleasure to present Tirana and the UNICEF Global Forum as a success story of a kid friendly city. We focused a lot on the kids. We started with playgrounds, kindergartens, and nurseries,” he said.

He claimed that this accolade is “further motivation” for him to make more playgrounds and better schools in his next term.

Unfortunately, the reality for children in the city is a little different.

Tirana ranks as one of the most polluted cities in the world, ranking at 35th out of 294 globally, and 2nd only to Tetovo, Macedonia in terms of European cities. One local pediatrician that I spoke to told me that in her twenty years of practice cases of asthma and other respiratory issues in children are on the rise. She said that matters have gotten significantly worse over the last decade.

There is also a serious problem with water in Tirana. Water coming from taps is not safe for human consumption and the city has been blighted by serious water shortages for the last five months. Some citizens have only had water for around three hours a day, others have gone months without any at all. UKT, the local water company and the Municipality have denied that there is any shortage at all and refuse to accept that the water is not drinkable. A class action lawsuit is being filed by citizens against UKT regarding the poor quality of water provided.

Mayor Veliaj recently started installing bicycle lanes around Tirana in an attempt to help with the traffic problem but it has been suggested that the paint used to paint the lanes contained chemicals including lead that are toxic to humans. I checked this with an employee at the Institute of Public Health, who asked to remain anonymous because of possible reprisals, who confirmed that the paint used is toxic to humans and was chosen because it cost less.

Then there is the case of 17-year-old Ardit Gjoklaj who was employed illegally and without social security at the Sharra Landfill, a private public partnership (involving a company owned by the head of the Socialist Party in Peqin) promoted by Veliaj as an exemplary opportunity for work. A number of journalists accused Veliaj of trying to censor the publication of investigations into the case but they found their shows cancelled, their jobs gone and smear campaigns launched against them.

Mayor Veliaj has long been criticised for his use of children in propaganda. He often appears hugging, touching, and surrounded by children in official photographs in an attempt to propagate his “child friendly” image.

Then in the summer, his aide Epidamn Zeqo tweeted a picture of a naked child in the fountains on Skanderbeg Square which Veliaj then retweeted. Posting a naked image of a minor on social media is morally dubious and potentially illegal and open to abuse. It can also be considered as non-consensual nudity, something that is banned by Twitter.

The Municipality, headed by Veliaj has also failed to protect children, favouring political protection above safety. In the case of Nashi Shehapi, a Kindergarten Director and Socialist Party vote collector whose daughter works in the Municipality, she has not been suspended from work despite ongoing legal action against her for beating and abusing a three year old boy.

She is accused of beating the child and locking him and others in a cupboard under the stairs in Kindergarten No.2. Despite significant evidence against her, she has been protected because of her political loyalties and connections. Exit found that she had engaged the services of a “fixer” to allegedly pay the Prosecutor to ensure the case never reached court. She also threatened staff and parents that they would lose their jobs or their child’s places if they spoke out against her.

My source at the IPH also told me of two private kindergartens where there were outbreaks of disease and certain issues that should have resulted in their closure. But, due to the political connections of the owners, they were instructed not to lodge the issues nor to take any action against them.

When it comes to playgrounds, Tirana is not faring well either. Many of the cities playgrounds are in a poor state of disrepair with broken paving, litter, and worn-out equipment. Others have been sold off and bulldozed to make way for luxury apartments. The number of green areas are shrinking rapidly, playgrounds are dilapidated or turned into apartments, and public gardens are scheduled for development.

There is also a serious issue with the quality of roads and pavements. Where I live, it is impossible to get a stroller on and off the pavement, there are few crossings, and many broken paving slabs and even holes in the tarmac. Injuries are common and many struggle to navigate the streets and sidewalks of Tirana with small children or a stroller. Personally, I babywear but if I was to use a stroller, I would not be able to get it within about 25 metres of my apartment without assistance due to the horrendous state of the walkways and roads.

Before I had a child, I loved Tirana but as a mother, it is hard. In fact I plan to move outside of Tirana due to my concerns over pollution, lack of playgrounds, and health & safety for me and my family within the next year.  Tirana is NOT a child-friendly city and the Mayor is not interested in our future.