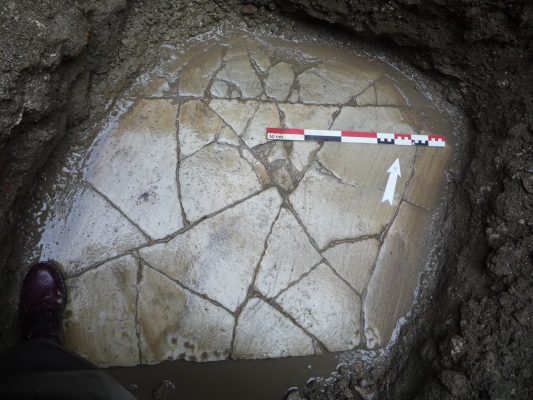 During the COVID-1 lockdown, a number of instances of cultural heritage sites being damaged by construction work were noted.

According to a report by BIRN, on 4 February, some ruins were discovered in the centre of Durres. Archaeologists said that they dated from the period of Late Antiquity- at least 5th Century AD

Fatos Tartari, an archaeologist who worked on the site said: “There we have the first traces of the prehistory of Durres, within the city limits.” He added that Devollite pottery had been found- some of the most beautiful examples of Illyrian ceramics known.

A day later, archaeologists found traces of ancient masonry, built weight stone blocks and several layers of bricks above it, connected with mortar. Located in Archaeological Zone A of the city, near the aqueduct, construction works were carried out without the approval and supervision of the National Council of Material Cultural Heritage (KKTKM). This put the archaeological layers and the history they contain at risk.

Then on 19 February, the KKTKM asked Durres Water Supply and Sewerage who were conducting the work, to provide the site and findings “in situ” and as they were. Despite this, during lockdown, the findings were covered and lost.

This is not the first time that public or private enterprises have carried out excavation works in the city of Durres without the permission of the KKTKM or the Directorate of Archaeological Services.

Data collected by BIRN shows that at least two similar cases were recorded in the city during the COVID-190 lockdown.

When asked about the case by BIRN, the Durres Water Supply and Sewerage Company said that the investment was being carried out via a World Bank project and was not implemented by them.

“Durres Water Supply and Sewerage is only the beneficiary of this investment, not the implementer.”

In the Kodri e Currilave part of Durres, there are documented archaeological layers dating from the 8th Century BC. But at the end of March, during lockdown, a project was launched the flatten the ridge and to build a residential complex of 40 villas. The project was based on a construction permit issued in 2010 for three buildings, renewed in 2020 with an extension. It was awarded to Braka Construction.

The works that began during the peak of the pandemic, while the country was patrolled by the police and the army, did not have an archaeological permit despite being in an Archaeological Area B.

Depending on the importance of archaeological finds in an area, they are categorised into areas A and B. In A areas, any kind of construction is prohibited, and in B areas, approval must be given by the National Council of Material Cultural Heritage.

On 19 March, in district 6 of Durres, the construction of a 6-storey building with a basement started. While movement by car was banned during this time, excavators and heavy trucks continued to work.

The building is being constructed by Kristi Konstruksion 2003 and received the go-ahead to commence work in June 2019. They were allowed to start work as long as it was monitored by a licensed, private archaeologist.

The company hired archaeologist Luan Perzhita, Director of the Institute of Archaeology of Albania and the licensed entity for monitoring the works in the area.

Local residents said archaeological remains were found at the site while it was being excavated to build the foundation. BIRN then monitored the site and photographed the findings.

“From the photos, it is clear the presence of an intense archaeological layer, probably from the period of Late Antiquity, this in terms of soil color and building materials that are distinguished in the last two photos,” commented archaeologist Neritan Ceka about the structure photographed in the foundations of the palace.

Residents said they also saw artefacts and ruins being flattened and not documented. One told  BIRN that most of the destruction of the site was done at 5am on 23 March.

“When the private archaeologists arrived at 8 o’clock in the morning, they had finished work, eroding the archeological remains by the school,” the resident confessed on condition of anonymity.