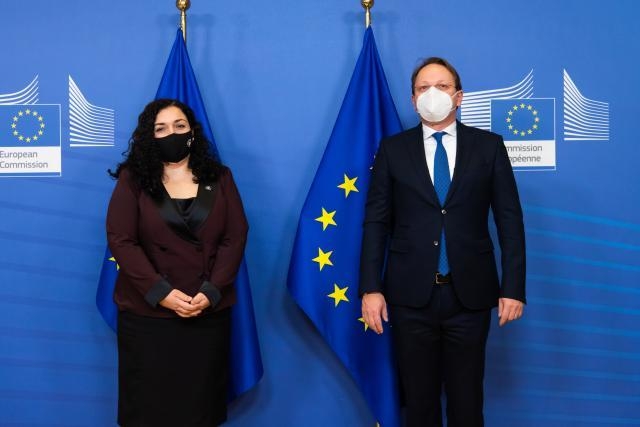 The Acting President of Kosovo, Vjosa Osmani is staying in Brussels for a two-day visit where she held separate meetings with the European Commissioner for Neighbourhood and Enlargement, Oliver Varhelyi and the President of the European Parliament, David Sassoli.

Varhelyi said he had a “good meeting” with Osmani.

“Stressed importance of Kosovo continuing to implement EU related reforms, including fight against corruption and organized crime, and to cooperate in the region, while drawing benefits from Economic and Investment Plan,” Varhelyi wrote on his Twitter account.

Osmani said that the integration process in EU is one of the main aims of Kosovo foreign diplomacy.

“It is important to be aware that the lack of ambition or commitment by any party in the European integration process means that the support and trust of citizens in the path of EU integration can be damaged,” Osmani said.

A statement issued by the Presidency says that Osmani pointed out the fact that Kosovo has fulfilled all formal criteria for visa liberalization.

While as for the dialogue with Serbia, Osmani said that unification of all political specter in Kosovo is necessary in order for it to be successfully concluded.

“She asked for EU to be more vocal in relations with Serbia in order for this country to implement the agreement signed in Brussels,” statement says.

While during the meeting with Sassoli, Osmani pointed out the need for the European Parliament on requesting from five EU members states to recognize Kosovo.

Kosovo declared its independence on February 17, 2008, while the five EU member states not recognizing it as an independent country are Spain, Slovakia, Cyprus, Romania, and Greece.