It’s been two weeks since my Twitter account was blocked; by Twitter itself. Perhaps it is of interest to explain how it happened. On 9 January, one day after Twitter decided to ban the US President, I tweeted a quote from Noam Chomsky saying “If you’re really in favor of free speech, then be for precisely the views you despise. Otherwise, you’re not in favor of free speech”.

I added that there is also a similar quote from Rosa Luxemburg, a WW1 time German Communist, and I ended it with the #deplatforming hashtag. I intentionally picked left-wingers to obliquely express my disapproval of the Trump ban. 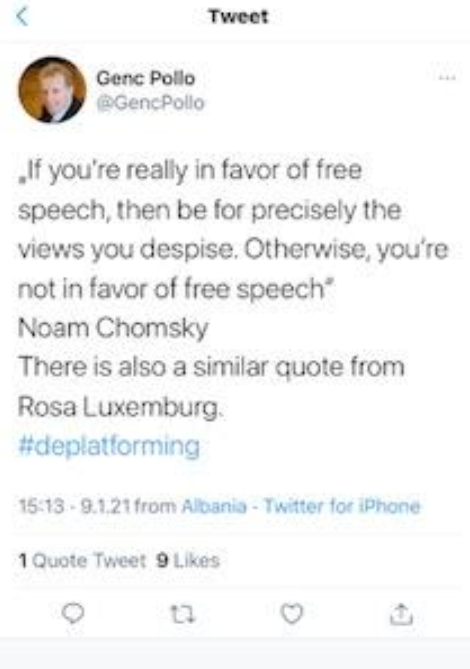 An hour later I posted a 38 second-long video I received from my party PR unit featuring the Vlora seaside promenade flooded after some rain. The voice-over was that of Prime Minister Rama speaking months earlier during the inspection of the promenade, his flagship investment in his own constituency. Apparently, proper drainage works were neglected or missing. The video features only once and for a second, two municipal workers on the street with water reaching their thighs, and at the end Rama and the Vlora mayor toasting with a glass of brandy in their hand.

I duly proceeded and was told I had two options: either to immediately delete the video and have the account fully restored or to appeal the suspension. I watched the video again: neither the workers in a flood emergency nor the dignitaries drinking raki could be really described as sexual violence; not even as an assault or battery. Rama’s voice-over sounded spooky at moments but still, no healthy mind would consider it “sexual violence and/or assault”.

I found it flabbergasting! I couldn’t believe that a human monitor or even software would make this mix-up. And what a strange coincidence just after my Chomsky/ Luxemburg tweet!

However, I had a choice to make: to delete the video and recover my account which would be a false confession, reminiscent of Communist-era trials in my country; or to appeal, putting my trust in the Twitter internal procedures and their swift action. I opted for the second.

Sixteen days later, as I write these lines, my account is still locked and I can’t see the Direct Message box which I often use for private and work communications. My lawyer friends are advising me to take Twitter to court; this, despite the dismal state of the Albanian judiciary following a rather misconceived reform that has left the courts in stupor. While I am considering my next steps here a few considerations:

Twitter, Facebook, and very few other social networks have become the main communication platform not only between people but also between elected politicians and the public. They correspond somehow to the town crier of the 18 century, the daily newspapers of the 19th century, and the radio-television of the 20th century.

With the advent of democracy, there was a place for government criticism, alternative political views, and opposition activism in the traditional media. But would these media be right, if they would, unthinkably, decide to ban the King or the Prime Minister and justify it as their service to the general interest? With no accountability and transparency of the decision-making? While Twitter, followed by Facebook and others, has acted disregarding Chomsky’s advice, how can we be sure they were not motivated by their ideological views and even their commercial interests? Should our democracies unconditionally outsource major political decisions to the non-transparent and monopolistic Big Tech? Or should they retain them in the realm of constitutional procedures and state institutions? I would be rather conservative on this.

On the other side, the need for regulations governing rules and algorithms of the main platforms when dealing with unlawful, illicit content and harmful misinformation that has contributed to sowing division and frustration within societies and also mistrust towards democratic institutions must be tackled. Without sacrificing the freedom of expression. The recent proposals by the European Commission in the Digital Services Act contain good ideas and keep a sober approach.

We should not forget however the liberating effect social media has in countries like mine where the government has managed to silence criticism and other views in most conventional media. Facebook and other platforms have become in the last years the new and open venue of democratic exchange of opinions the ruling party cannot censure. Not that they are not trying. Their armies of tax money paid trolls use every reporting procedure and abuse copyright to take down postings and accounts they don’t like. Still, social media remains an important space of freedom and it should stay so in the future.

Genc Pollo is the former Chairman of the Parliamentary Committee on Education and Media and also of European Integration, former Deputy Prime Minister, Minister of Education, Minister of Telecom & IT.