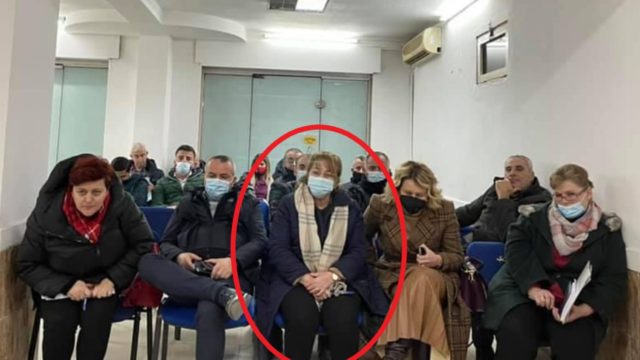 Mira Rakacolli, the chair of Albania’s task force on pandemic response, admitted to having violated the COVID-19 rules during an electoral event of the ruling Socialist Party, but argued that it was “an isolated incident”.

Asked by journalists during a press conference of Monday, she claimed that the picture showing 14 people in the room, more than the allowed number of 10, was taken at the end of the event, when other people had entered for another meeting that was scheduled to take place in the same room.

Rakacolli, who is also deputy minister of health, participated in a Socialist Party ten days ago. A photo from the event was posted on social media by Socialist MP Elona Gjebrea but was later removed.

It showed her and others violating the social distancing rule that her task force has made obligatory on Albanians. Several of those attending the meeting did not wear masks.

According to measures taken by Rakacolli’s task force, everyone in the meeting must have been fined, including herself and the meeting organizer, the Socialist Party.

“To my knowledge, there were fines given that day,” Rakacolli told journalists on Monday.