Parliament and Academy of Sciences Hold ‘Scientific Conference’ on COVID-19 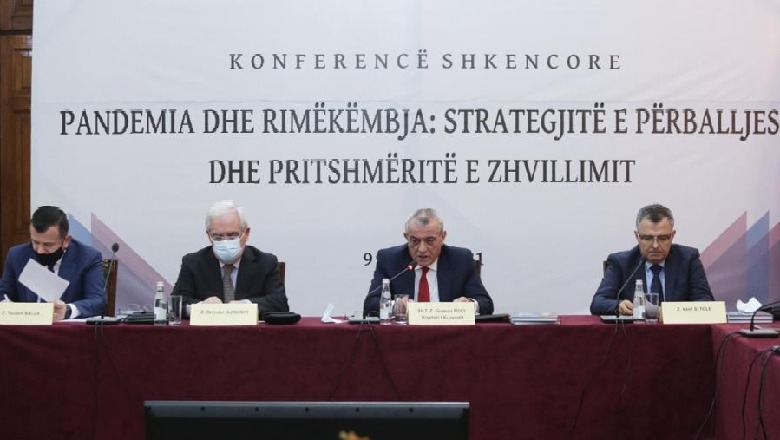 The Albanian Parliament and Academy of Sciences held what they called a scientific conference on the pandemic on Tuesday.

Under the name “The pandemic and recovery: strategies to face it and expectations of development”, the event was an opportunity for Socialist ministers and MPs to present the government work, and for two professors and a young scholar to give their take on related issues. The governor of the Bank of Albania also presented the institution’s work.

Literature professor Shaban Sinani gave an overview of the pandemic in Albania.

Young researcher Joniada Bajraba, daughter of the chief of staff of the Speaker of Parliament, Kosta Barjaba, explained the expected effect of remittances in the recovery.

Professor Ardian Civici gave his opinion on whether an increase in public debt is the right answer toward recovery, while professor Selami Xhepa talked on the effects of the pandemic.

Dozens of MPs and ministers laid out their work in an event that lasted more than three hours.

The Socialist chief in Parliament, Taulant Balla said that Albania deserves to sit in EU accession talks, as it has meet all conditions.

Speaker of Parliament Gramoz Ruci and President of the Academy of Sciences Skender Gjinushi agreed in their speeches that Albanians should comply better with the government restrictions, which should also be toughened.

Today, Prime Minister Edi Rama warned that more restrictions will be put in place soon in the country.

Former politician Skender Gjinushi illegally took over the Academy of Sciences in 2019.

In late December, amidst discussions of provisions of vaccines in Albania, the Academy claimed it had found that the population in Tirana has reached herd immunity. They added that those infected with COVID-19 in Albania could be 10-15 times higher than reported.

The findings were followed by an extra €810,000 allocated by the government for three scientific works to be prepared by the academy.

On Tuesday, professor Artan Fuga criticized the government’s “Stalinist management of science” with funds going to the Academy for studies that are never published, like the one on the “herd immunity” in Tirana, whose supposed main findings were only presented in a media statement.

Read more: The Return of the Dictator’s Servants