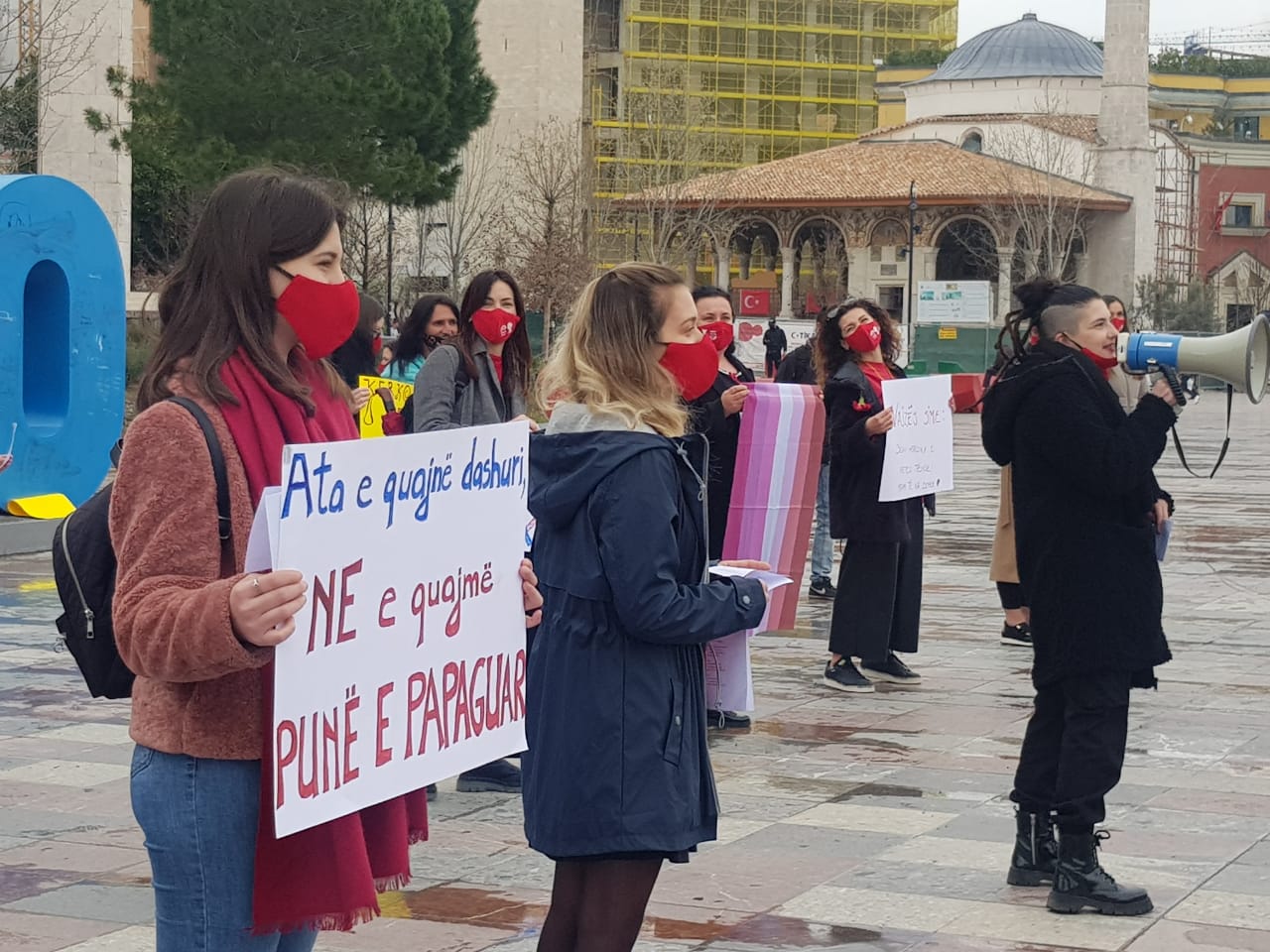 Despite COVID-19 pandemic restrictions, a group of activists from the Women’s Empowerment Network, representatives of civil society, members of the LGBTQ community, and members of the public gathered in a symbolic demonstration in Skanderbeg Square to protest on International Women’s Day.

This is the third year in a row Albanian activists organized a demonstration on this date. Women’s day in Albania was traditionally a “celebration” in the past, but young Albanian women are repurposing it as a protest in light of the ongoing struggles faced by women and girls.

A new wave of activism is spreading in Albania, rippling through Facebook, Instagram, and Twitter with hashtags such as #refuzoj (refuse) #megratepergrate (with women for women). 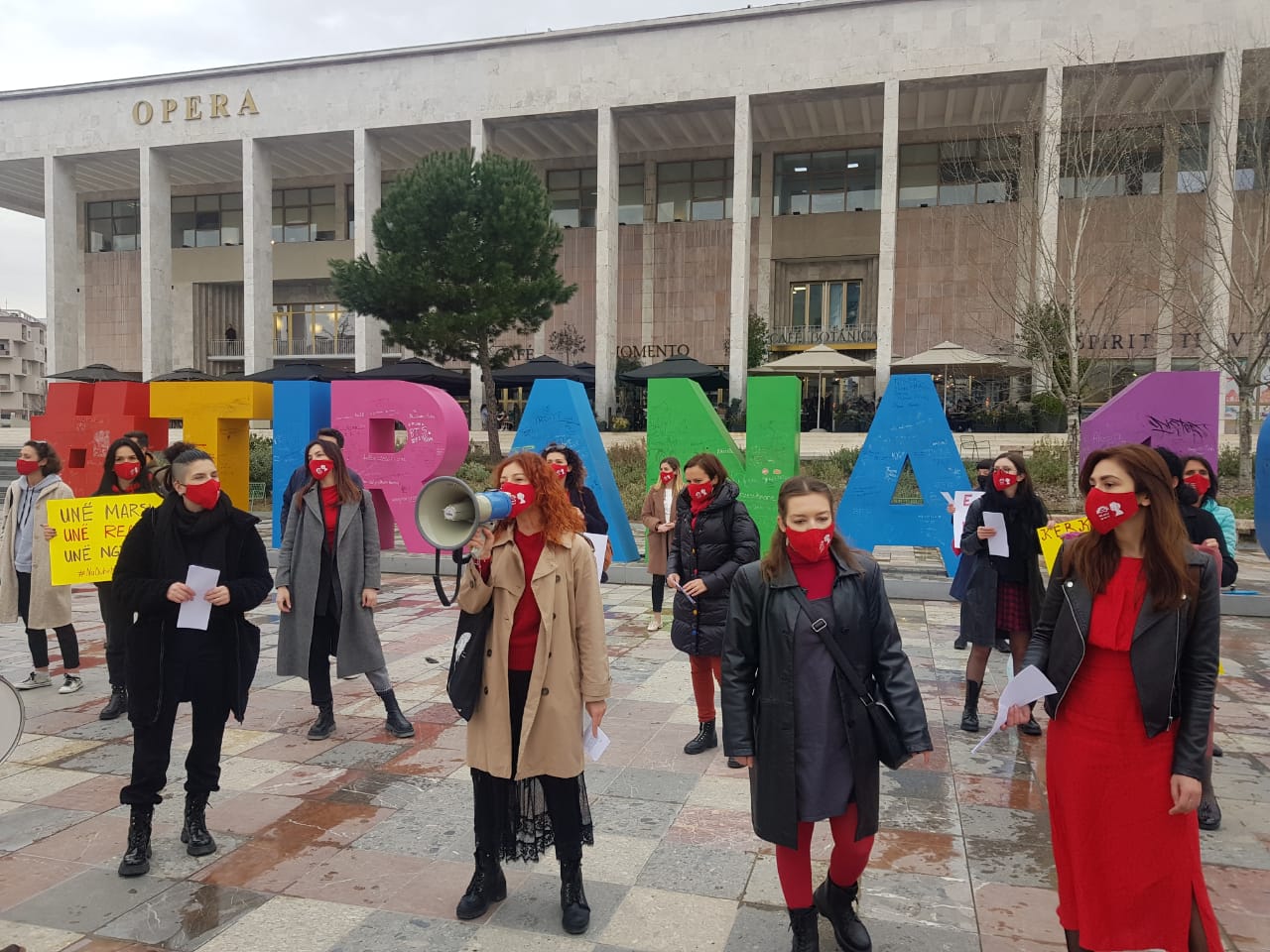 During today’s protest, women carried placards saying “No to Violence” “Solidarity Women for Women “, “Misogyny is Another Pandemic “, and “I march, I raise my voice“.

They also called for an end to the burden placed on women when it comes to domestic and caregiving duties: “No to Housework, an End to Unpaid Work”.

Exit spoke to several of the protestors who explained what this day means to them and why they were protesting.

“The pandemic has revealed how deeply entrenched gender discrimination and inequities remain,” one woman said.

Another added that “on March 8, we raise our voice against injustice, against systematic oppression. We work towards profound social and economic transformation, and towards a fairer world for us. We believe that by supporting and empowering each other we can build a society where we have dignity”

One protestor highlighted the gross gender disparity caused by the pandemic and the increase in violence.

“As our patriarchal world sits still, the stress, sexism, and violence women face within the home are ramping up,” she said. 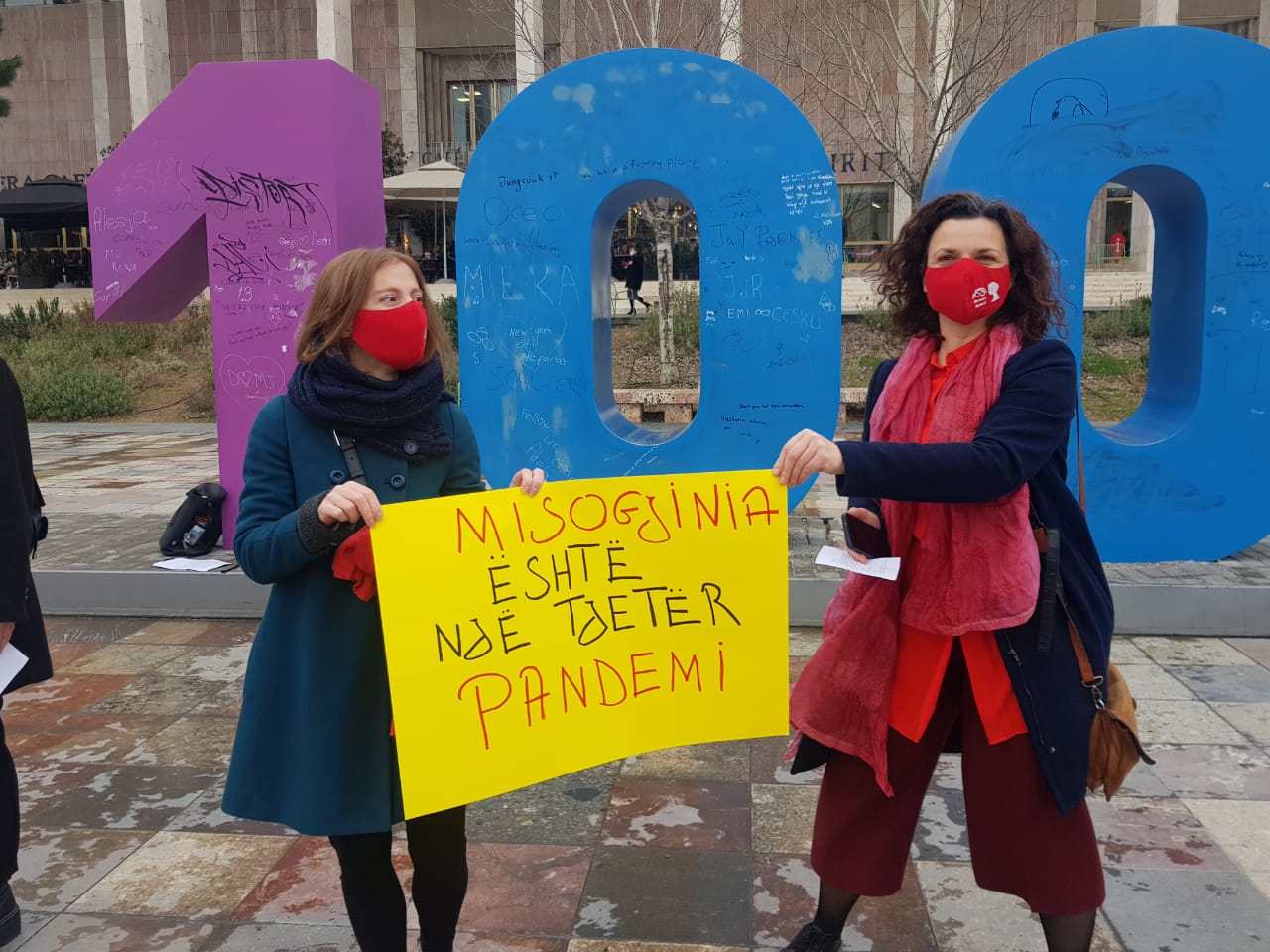 “In the workplace women often face enslaving wages, sexual harassment, and constant systemic and patriarchal violence and pressure,” another stated.

There were also men in attendance, who said they felt it was important that their voices were heard in the context of supporting women.

“Everyone talks about patriarchy, misogyny and takes women’s rights as a war. The war has never solved anything. Instead, it would be good for the Albanian woman and her contribution to society to be brought to the public’s attention during March. Through this, human rights must be demanded.”

Another stated that it’s important to focus on the stories of men who respect and support their wives, sisters, mothers, and have a more engaging dialogue with their daughters.

“In this way, every man will understand what a woman, a colleague, wife, mother, or daughter is up against so that he can do his part to build an equal world.” 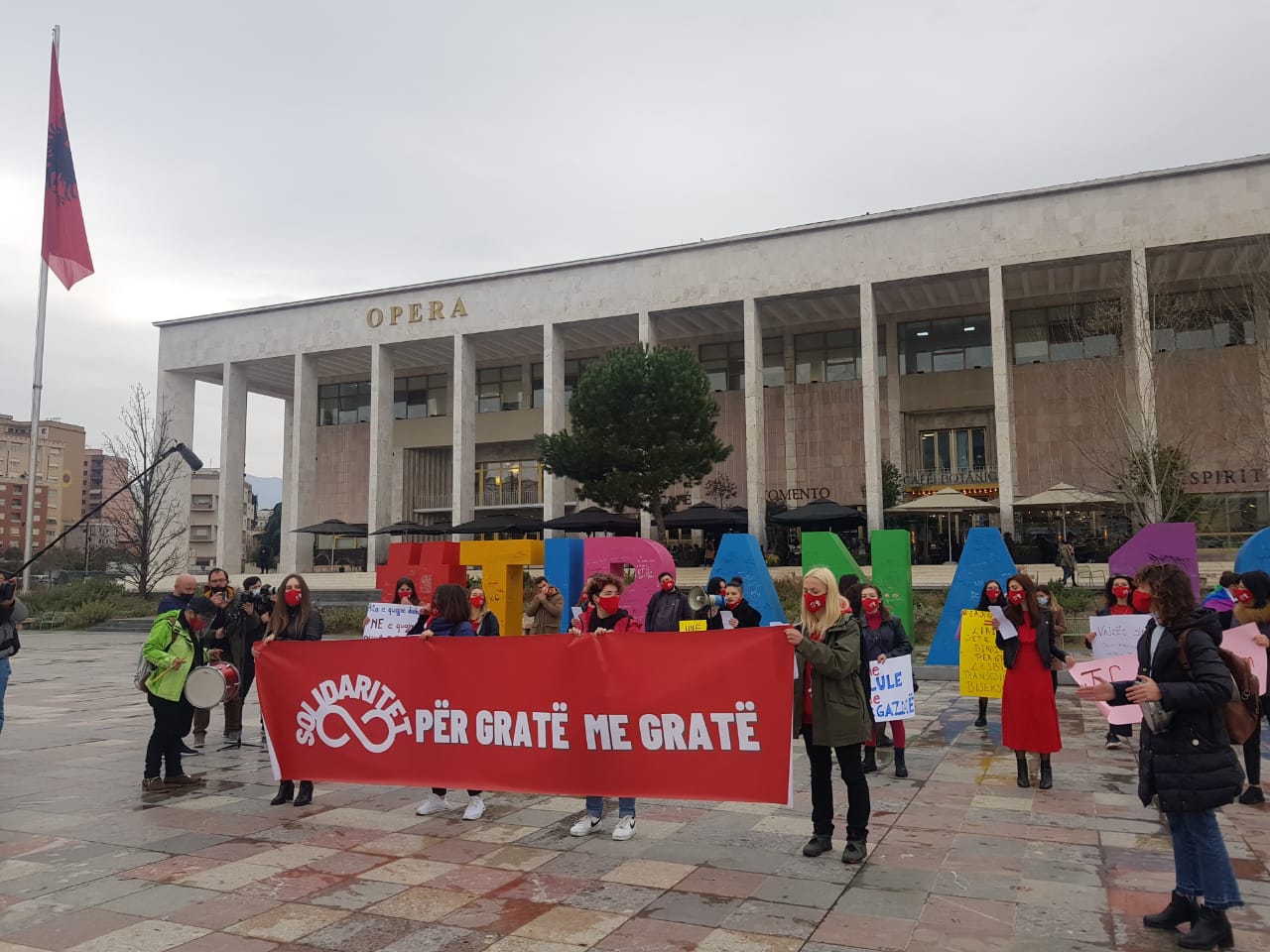 International Women’s day is currently at risk of commercialization like other holidays including Valentine’s Day. It’s being hijacked by corporate brands rather than focusing on promoting equality, valuing the contribution women make, and recognizing the valuable work women do in every aspect of society.

Visible on billboards in the city, Exit observed adverts suggesting men buy their wives an electric pressure cooker or avail themselves of discounted beauty products.

It’s believed that 30,000 women and girls have lost their jobs due to COVID. There has been no special assistance provided by the state for women.

More than 50% of Albanian women suffer from domestic violence in their lives. Yet, in 2020, the State Police only managed to prosecute 13% of the complaints that were made. 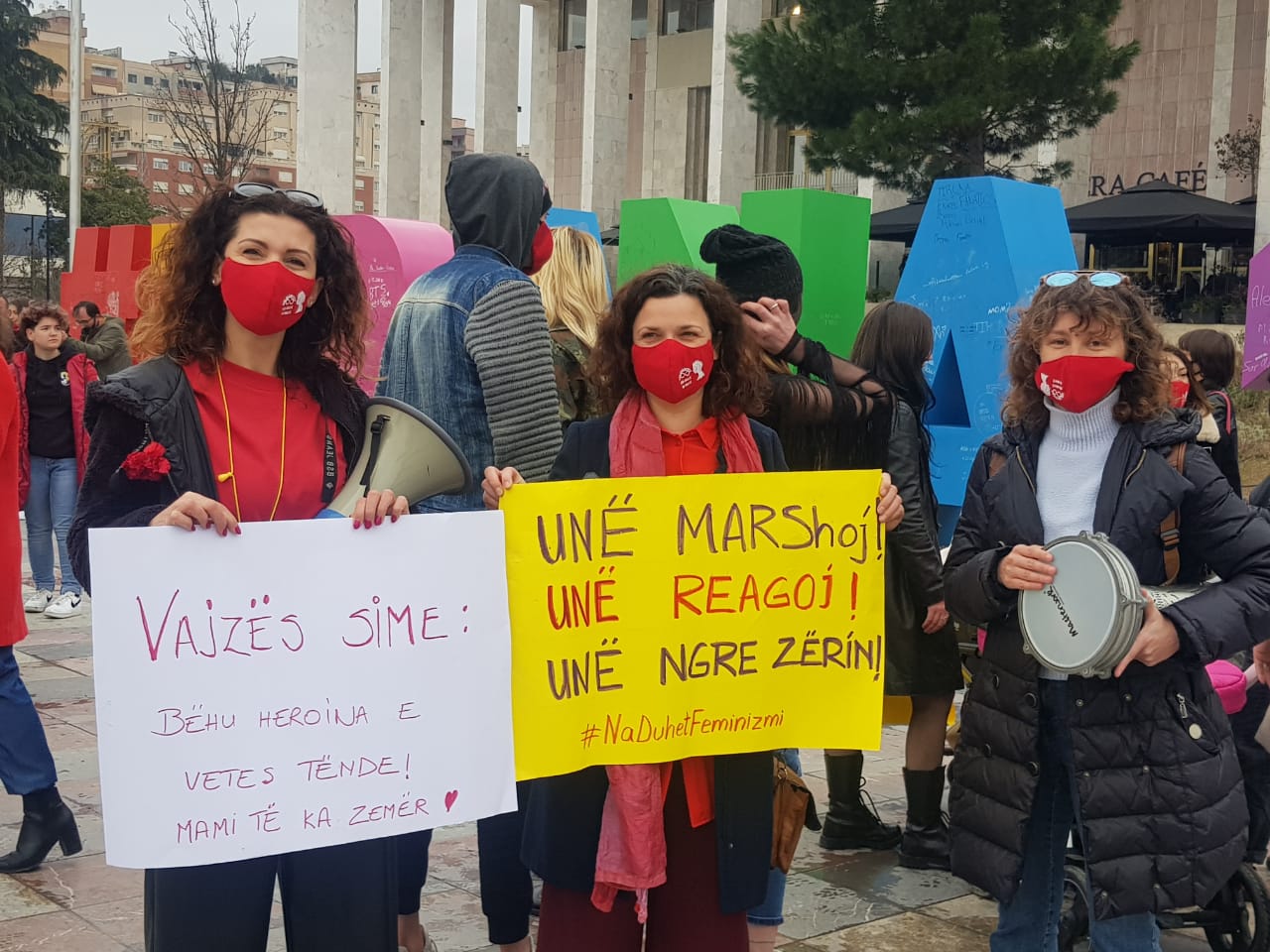