Beyond Butrint, Saranda in the Off-Season 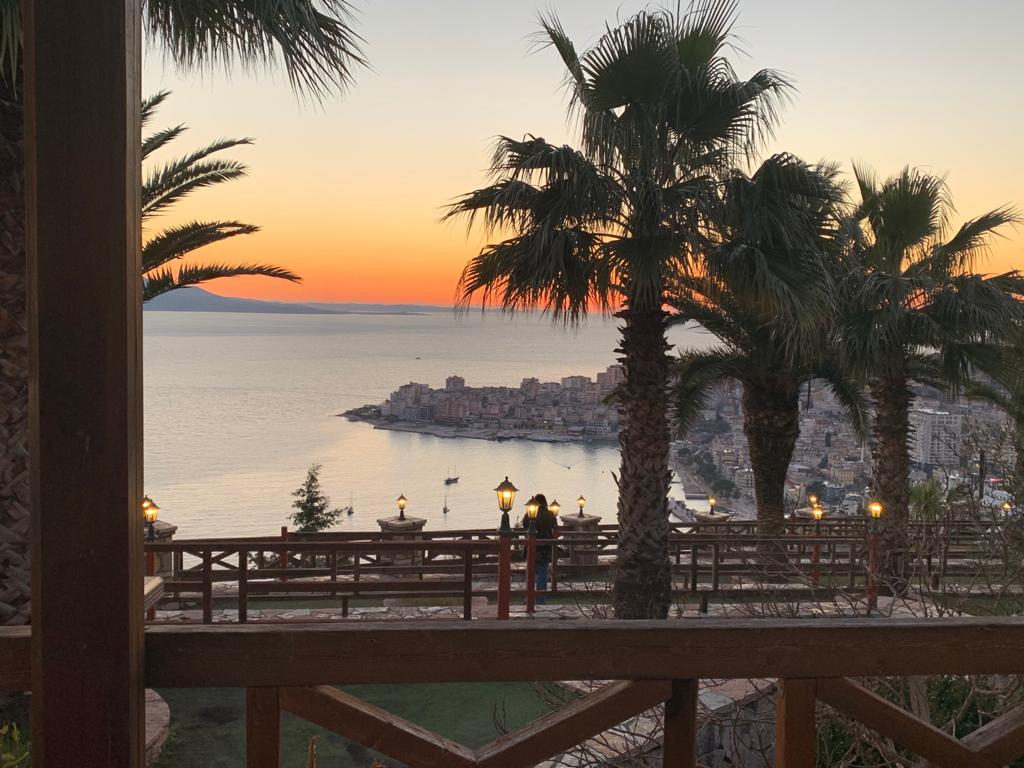 Saranda is a popular summer destination, well known for its beaches, nightlife, easy access to Greece via the ferry (in non-covid times) and Butrint National Park, the nearby archeological UNESCO World Heritage site. Of course, Butrint is a must-do as all UNESCO sites are, but there is plenty to do in Saranda to keep you busy in the off-season before the holiday crowds return.

To start, try calling hotels directly rather than booking online if you’re going off-season. Many of them are struggling with the border to Greece still closed and the drastic drop in tourism. You most likely will be pleasantly surprised by the deals they will offer on hotel rates when they don’t have to pay service commissions to the traditional booking apps.

When we visited last month, we stayed at the Bougainville Bay Resort & Spa on the beach in the center of Saranda for far less than expected and included breakfast by the water. The hotel was built in a Gaudi style of rounded corners, unusual colors, meticulous attention to detail, and whimsical shapes one typically only sees in Barcelona, Spain and not in southern Albania. There might have been three other guests at the resort, so we pretty much had the place to ourselves. (NOTE: I know it sounds odd, but make sure to visit the underground garage—it’s spectacular.)

Slightly southeast of town, strategically perched atop a hill, is Lëkurësi Castle built in 1537 by Sultan Suleiman the Magnificent. Suleiman had attacked Corfu and needed the castle to control the harbor and road to Butrint. Later, a village resided within the now largely ruined walls of the castle that was anchored by the still-standing two round towers at each corner.

While there, it is worth the time to have a coffee or something simple to eat at the restaurant built to resemble the castle surroundings. In one direction, you can see the Ksamil Islands; in the other direction is Sarana, The views are dramatic and will not disappoint.

The road to this 6th century Eastern Orthodox monastery is steep, narrow and a little tricky to navigate as it winds through neighborhoods clinging to the side of the mountain.

The monastery is thought to have once been an important shrine and pilgrimage site but much of it was destroyed first by the Ottomans, then by bombs during World War II, and lastly when it was used as a military site during the communist era (which might explain the heavily padded locked door in one corner of the ruins that I tried so hard to open).

At one point, the monastery included a basilica, places for pilgrims and other visitors to stay, underground chambers, holy water springs and crypts. Forty small chapels are said to be below ground, each dedicated to the Forty Martyrs of Sebaste who were tortured and executed for not abandoning their Christian faith. There are a few openings in the floor where one can get a glimpse of subterranean rooms and water, but there is no way (at least that we could find) to get there to explore further. The church of the monastery was the largest basilica type church in the region at one time, and you can get glimpses of the interior walls though heavy wrought-iron gates.

The monastery is also the namesake for the town of Saranda. The word “Saranda” is derived from the Greek phrase ayia saranta, meaning 40 saints.

THE place to see the sunset

Even if you have a car, leave it behind and take a taxi to Wine Bar Kristiano (it’s only about 1,500 leke roundtrip for as many people you can squeeze into the car). The roads are not great, and Google Maps might just take you on a wild goose chase that ends on the wrong side of a stone wall as happened to us.

As its name suggests, Wine Bar Kristiano offers a large selection of wines by the glass that can be enjoyed in front of the fire, at a table with a meal or outside on the terraced veranda if the weather is warm enough. What isn’t so obvious from the name is that this place is known by locals as the best place to go at sunset for unmatched views of Saranda and Ionian Sea. The staff is incredible and they make you feel like you’re part of the family (our waiter even offered to drive us back to town to save us taxi fare).

Recently, the owners also opened Villa Kristiano 21 under the same roof. Here is a perfect place to be for a quiet, romantic get-away or as a destination for those who prefer privacy away from the bustle of town while also having easy access to Saranda.

Saranda might not be the first place one thinks to go when it’s not beach season, but it certainly is one that should be considered.